Bob is forced to confront his biases and impulses in “Straight Outta Lagos”, as he’s honored for his work in a ceremony that Abishola finds more important than he does.

Bob is forced to confront his biases and impulses in “Straight Outta Lagos”, as he’s honored for his work in a ceremony that Abishola finds more important than he does.


This recap of Bob Hearts Abishola season 2, episode 3, “Straight Outta Lagos”, contains spoilers. You can check out our thoughts on the previous episode by clicking these words.

For his invaluable contributions to the sock industry, Bob has been declared the businessman of the year, ahead of even the guy in charge of Spanks. There’s a fancy dinner and awards ceremony pending and naturally, he wants Abishola there, even if she sees the whole event as much more important than he does. She even warns him against humility.

(Note: I’m a culturally clueless white guy, obviously, but I grew up in a pretty multicultural — read: deeply impoverished — area in the north of England and one of my close friends growing up was of Nigerian descent. He lived with his parents and one aunt, for some reason, and things I picked up from hanging around this guy’s family has formed my entire metric for this show’s cultural authenticity. Anyway, his family was obsessed with the idea of success and bragging about it afterward, so this whole plot rang pretty true for me.) 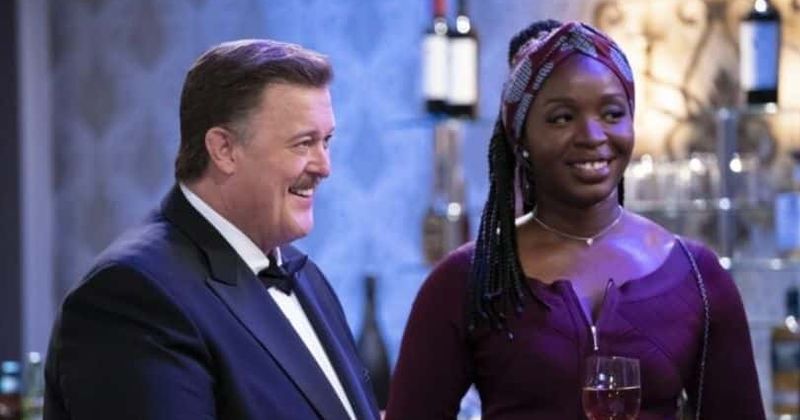 Olu and Tunde are similarly impressed with Bob’s accomplishments and dismayed by his lack of enthusiasm. He takes Christina’s side in her assessment that it’s just a party for white men to pat themselves on the back. Dottie might think it was better when men were in charge, but the rest of the family is pretty progressive, and when Bob and Abishola arrive, he can’t help but notice she’s the only Black person present. Of course, Bob can’t help but use that novelty to make himself more interesting, telling Abishola’s story for her and talking over her when she tries to contribute. When in Rome, you do as the Romans do, even if you don’t necessarily realize it.

Of course, Abishola doesn’t let this kind of thing stand and confronts Bob about his actions. She explains how proud she was of him and how much she went out of her way so that she could make a good impression around his peers, and all he did was talk over her. Refreshingly, Bob is receptive to this and dedicates his acceptance speech to his fiance. Afterward, she decides she’s going to spend the night at his. Score!

The warehouse subplot continues in “Straight Outta Lagos”, with Douglas working there now, and doing so with enough enthusiasm to impress Kofo and Goodwin. He’s happy to be praised — so happy, in fact, that he takes his two new friends out for drinks to “a little hole in the wall” that turns out to be an upscale bar through a literal hole in a wall. Douglas is struggling to let go of his old lifestyle, spending two paychecks on a bottle of vodka, but Kofo and Goodwin seem to like his old lifestyle well enough — especially once the girls get involved. It looks like this is going to be a persistent subplot throughout the season.

Thanks for reading our recap of Bob Hearts Abishola season 2, episode 3, “Straight Outta Lagos”. For more recaps, reviews, and original features covering the world of entertainment, why not follow us on Twitter and like our Facebook page?