Ronald plays a very risky game in “Unfinished Business”, while Jenny and Cassie get closer than ever to the girls — but will they realize?

Ronald plays a very risky game in “Unfinished Business”, while Jenny and Cassie get closer than ever to the girls — but will they realize?


This recap of Big Sky season 1, episode 4, “Unfinished Business”, contains spoilers. You can check out our thoughts on the previous episode by clicking these words.

The Sullivan sisters have made the news in “Unfinished Business”, which is lucky for them but unlucky for Ronald and Rick. The former sits with his mother, watching the report over his cereal, and Helen makes it clear she put two and two together regarding her son a good while ago. With his “urges” and consistently weird behavior, not to mention his worsening attitude, she had pretty confidently deduced he has something to do with the missing girls. But, as long as she thinks there’s more good in him than bad, she won’t do anything about it – mothers, eh? Can’t live with them, can’t angrily pour cereal over their heads when they confront you about being a sex criminal.

What’s funny about all this is that Ronald isn’t even the likely suspect as far as Jenny and Cassie are concerned. That honor goes to Rick, who is fuming at the involvement of Sheriff Walter in his affairs, and Ronald’s news that his mother has basically figured out what he’s up to. But Rick’s big, blustery threats don’t hold much water since Ronald apparently has a trail of evidence leading right back to him as an insurance policy. I’m not sure we buy Ronald as being that calculated, but you never know. Either way, it isn’t a risk that Rick is willing to take. Not yet, anyway.

Rick is basically a cartoon villain, but he’s playing a type that I think we’re going to be seeing a lot more of – the right-wing anti-PC Republican patriot, bitter about the march of modernity. You get the sense when he sees Walter that he’s less annoyed about being investigated than he is about being targeted by a Black woman who evidently lacks the appropriate reverence for American law enforcement. He doesn’t know that Cassie has (illegally) planted a tracker on his SUV, but if he did, he’d probably blame that on cancel culture as well.

Things take a weird turn in “Unfinished Business” when Ronald, seemingly at random but probably not, goes to the quilt shop owned by Rick’s wife Merilee and charms her into going dancing with him. I must admit I laughed out loud when Ronald revealed he’s a social taxi dancer. I mean, of course he is. Is it a bit of a stretch that this flagrantly creepy guy could charm anyone, let alone a pretty older lady like Merilee? Yeah, possibly, but I think his whole gimmick is targeting lonely people and relating to their plight. It isn’t like he picked up a hot young model at a bar – if someone gave me a list of places where you’re most likely to meet women, I doubt the quilt shop would be on there, you know? 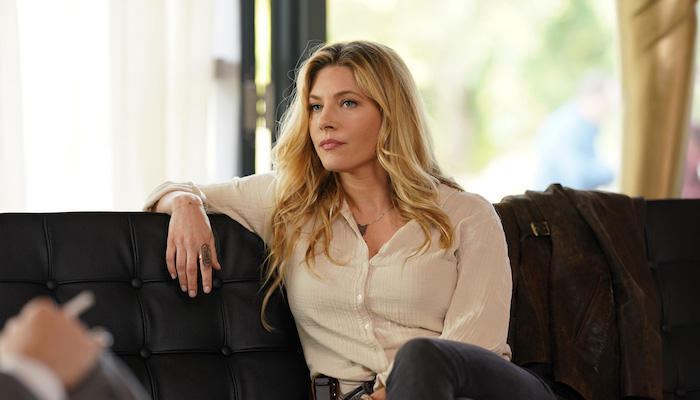 Anyway, Merilee and Ronald go dancing. They have a nice time, agree they’re both lonely but aren’t looking for anything serious, and amicably part ways. It’s a seemingly innocent encounter but you’ll be surprised by the severity of the ramifications, though we’ll get to that shortly.

In the meantime, let’s check in on Danielle, Jerrie, and Grace, the latter of whom is beset with a very bad infection after having been shot in the leg by Rick last week. The ingenuity of them using maggots from a rotting can of processed meat is offset slightly by the fact that maggots don’t eat infections, so the whole process does no good whatsoever and requires actual antibiotics, administered by Rick after Ronald realizes he can’t do anything else to help. Throughout all this Grace remains wonderfully acerbic and gives neither of them an ounce of satisfaction. She’s a keeper, that one, provided she doesn’t contract sepsis and die.

Elsewhere, Cassie and Jenny, who really need to stop jumping on the first lead they find, have come up with a master plan for isolating the trucker who might well have kidnapped the girls – Jenny goes undercover as a so-called “lot lizard” so she can snoop around the truck of the first suspicious guy on the list. He turns out to be a germaphobe and a bit of an unpleasant oddball but not, obviously, their man. Nothing, in particular, is gleaned from this sequence to the extent that I question its inclusion; I honestly reckon it’s there just because seeing Jenny go undercover as a prostitute is fun and it gives her more time to bond over their half-baked and potentially illegal ideas.

Speaking of which, they later follow the tracker on Rick’s SUV to the exact spot where the girls are being held, but they can’t hear them screaming for help a few feet beneath them and leave. So close, yet so far.

Anyway, the big cliffhanger of “Unfinished Business” is whether or not Rick stoves Merilee’s head in with a hammer after he finds out that she’s been social dancing with other men – and he finds out, by the way, because she smugly tells him, which is just brilliant. More on whether or not he kills her in the next episode.

Thanks for reading our recap of Big Sky season 1, episode 4, “Unfinished Business”. For more recaps, reviews, and original features covering the world of entertainment, why not follow us on Twitter and like our Facebook page?