Despite Mayim Bialik’s innate appeal, her new sitcom Call Me Kat is a woefully unfunny throwback that has precious few good ideas — and not nearly enough cats.

Despite Mayim Bialik’s innate appeal, her new sitcom Call Me Kat is a woefully unfunny throwback that has precious few good ideas — and not nearly enough cats.

It’s always interesting to see what stars who’re very intimately attached to a particular project go on to do next. In the case of The Big Bang Theory, Jim Parsons has starred in a lot of movies – including, recently, Netflix’s remake of The Boys in the Band – and Kaley Cuoco only recently had a great turn in HBO Max’s original series The Flight Attendant. Kunal Nayyar did solid against-type work on the second season of Criminal: UK. And Mayim Bialik, aside from a couple of lines in an episode of Young Sheldon, has graduated to Call Me Kat, a generally woeful new Fox sitcom about a 39-year-old woman named Kat who owns and runs a cat café. She’s a literal cat lady.

That’s about as far as the jokes go, I’m afraid. The point is to build a framework around Bialik’s on-screen persona and, one assumes, subvert it, but there’s no subversion in the episodes I’ve seen – on the contrary, Call Me Kat falls into every sitcom cliché imaginable, including some devastatingly grating ones, such as a hyper-regular fourth-wall-breaking narration that feels transplanted from a much kitschier time when that kind of thing was interesting and not terribly annoying. 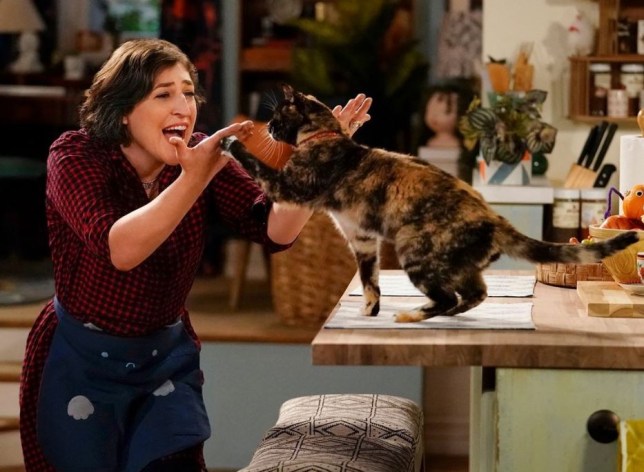 The cast is solid. Bialik’s personable in that socially-anxious sort of way, and at least she gets more to do here than she did in The Big Bang Theory. She seems willing to poke fun at her own image and can do physical comedy rather surprisingly well, though the “comedy” label is a bit generous in this instance. Swoosie Kurtz plays Kat’s mother, who is understandably worried about her life, while Kyla Pratt and Leslie Jordan play Kat’s cat café employees – Jordan, in particular, is a bright spot, as ever.

But the real hook comes in the form of Max (Cheyenne Jackson), a very handsome former college crush of Kat’s who, after a breakup, moves back home to Louisville, Kentucky – the show makes nothing of the setting aside from some oblique details – and starts tending bar right next door. This is an unlikely enough romantic pairing to be funny just on its face, but it’s more about exposing Kat’s lie that she’s perfectly happy and satisfied being a single cat lady on the cusp of middle age. What that says about real cat ladies is anyone’s guess, but if Call Me Kat is anything to go by, it’ll say it straight to camera over and over again.