The Great North has all the hallmarks of a real animated sitcom stand-out like Bob’s Burgers before it, boasting a great voice cast, enjoyably eccentric characters, and razor-sharp writing.

The Great North has all the hallmarks of a real animated sitcom stand-out like Bob’s Burgers before it, boasting a great voice cast, enjoyably eccentric characters, and razor-sharp writing.

If you didn’t know that the new Fox sitcom The Great North was created by Bob’s Burgers veterans Wendy Molyneux and Lizzie Molyneux-Logelin, it’d only take you about 30 seconds to figure it out. The show’s visual style is very similar, as is its sense of humour, specific tone, absurd rate of gags, and peculiar sense of self. It’s a weird thing that’ll nevertheless be no big deal to adjust to because there have been 200-ish episodes of another show to prepare you for it.

Animated sitcoms aren’t faring all that well lately. The usual stalwarts like Family Guy and American Dad continue to occupy airtime, but stuff like Bless the Harts, while perfectly adequate, isn’t making a splash. The Great North might. It’s odd, yes, but also very sharp and funny, with an interesting-enough setup and a solid-enough voice cast to become a network mainstay and develop a real following. I hope it does since it’s obvious from very early that with a few seasons to develop there’s basically no limit to the misadventures that the eccentric family at the show’s heart could get embroiled in. 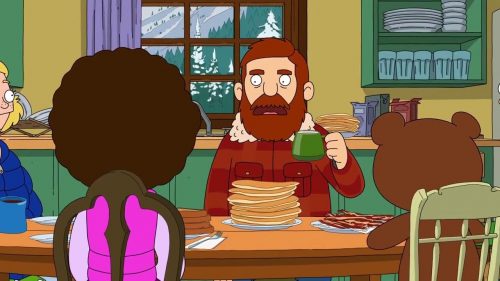 That family, the Tobins, is a surprisingly big one. The patriarch is literally named Beef (Nick Offerman), a hairy manly man living in the semi-rural Alaskan town of Lone Moose with his tight-knit family, who have been much tighter-knit since Beef’s wife ran away with her lover – an event that Beef reimagined as her death by mauling, a ruse he insists that everyone else in the family maintains. “Everyone else” includes his son, Wolf (Will Forte), and his city-born girlfriend Honeybee (Dulce Sloan), as well as daughter Judy (Jenny Slate), who talks to an imaginary Alanis Morissette played by the real-life version, and two younger children, Ham (Paul Rust) and Moon (Aparna Nancherla).

A lot of The Great North revolves around Beef and his weirdly specific brand of stoic masculinity; he’s totally okay with his son being gay but appalled at the idea of Judy working retail at the local mall. He’s hyper-fixated on his family “staying together” – he sees Wolf and Honeybee moving into the guest house as moving a million miles away – and is prone to bouts of extended self-loathing solitude. Yet even with all this, the show is largely framed in the perspective of Judy, who works better as a protagonist because she’s just come of age, so to speak, and wants to get out there in the world and discover some independence, which obviously drives Beef to despair.

The show’s humour relies on a certain hyper-specificity both in its characters and its setting, and it’s a testament to the fine writing and vocal performances that all this is bedded in by the end of the first episode, more or less, yet with the tantalizing prospect of much more to explore and unpack. From the first line to the last, The Great North had me howling, and that’s only a good sign. I can’t wait to go North again.