This recap of The Great North season 1, episode 1, “Sexi Moose Adventure”, contains spoilers. You can check out our spoiler-free review by clicking these words.

The Great North episode 1, “Sexi Moose Adventure”, more or less lives up to its title. But it’s much more interested in being a primer for the eccentric, dysfunctional family at the show’s core. It works a treat, honestly, and from the very first joke – the family’s patriarch, Beef, stoically uttering, “I almost forgot to stare with wild wonder at Alaska’s majesty while whispering ‘Hot dog.’ Hot dog.” – I was totally on-board.

We get a sense, for example, of the Tobins’ early morning routine of 5 am starts and high-calorie breakfasts, and the fact that Judy has just turned 16, and that she talks to a spectral version of Alanis Morissette played by Alanis Morissette, and that she has just gotten a job at the mall pertaining to her passion for photography. 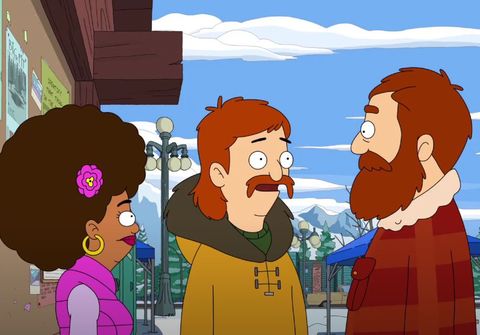 This is a secret, though, since Beef is rather unhealthily obsessed with keeping the family together after his wife Kathleen left him for another man ages ago – he pretends she was mauled to death by a bear and has the rest of the family maintain the illusion so he doesn’t have to grapple with it. The titular moose turns up for Judy’s birthday party with the balloons intended to spell “sixteen” actually spelling “Sexin” across its antlers. It makes off with Kathleen’s last remaining possession and Beef, after an ill-advised trip to the mall during which Judy’s new job is exposed, and a calamitous cake-lighting on his boat during which his hyper-competent masculinity is questioned, heads out into the wilderness in pursuit of it.

A broken foot – an Alaskan break, which is bad enough to show pain over – and a close encounter with the moose, as well as a charmingly honest conversation with Judy and a bail-out from the rest of the family, lead Beef to reconsider both how he sees Kathleen’s departure and his position on Judy’s job. In just this one episode, The Great North easily beds in its hyper-specific characters and setting, and it’s easy to imagine the show quickly becoming a regular highlight among the animated network sitcom crowd.

Thanks for reading our recap of The Great North season 1, episode 1, “Sexi Moose Adventure”. For more recaps, reviews, and original features covering the world of entertainment, why not follow us on Twitter and like our Facebook page?