Joëlle Jones’s Future State: Wonder Woman #1 introduces an all-new hero in a win for representation, and an enticing new direction for comic book storytelling in a win for the medium in general.

Joëlle Jones’s Future State: Wonder Woman #1 introduces an all-new hero in a win for representation, and an enticing new direction for comic book storytelling in a win for the medium in general.

DC’s “Future State”, an outgrowth of Dark Knights: Death Metal depicting various potential futures of the company’s most iconic and longstanding heroes, is a pretty ambitious experiment. With regular runs shelved for the next two months, the comics giant is going through a publishing period of great potentiality, a showcase of what might possibly happen given the tumultuous shifts caused in the industry by the pandemic. Untethered, mostly, from the current continuity, these titles represent a freer, more immediately exciting prospect for their creators, and that is perhaps exemplified most of all by Future State: Wonder Woman #1, which introduces a new version of the character, Yara Flor, in a blend of superhero story, fantasy adventure, and public transport satire led by writer-artist Joëlle Jones.

Yara Flor, the daughter of an Amazonian warrior and a Brazilian river god, is DC’s first Latina hero with her own comic – the fact she’s taking up the mantle of Wonder Woman is a pretty big deal. Diana Prince, though, is nowhere to be seen, and in 2050, Yara has become Themyscira’s champion; snarkier and more impulsive though she may be. Her world, brought to life by Jones, colorist Jordie Bellaire and letterer Clayton Cowles (both Eisner-nominated, as it happens), is more immediately mythical than the urban sprawls of DC’s other heavy-hitters, and that fantastical fusion of mythologies is what helps to elevate this new title, even as it works in large part as a skewering of a very real-world phenomenon. 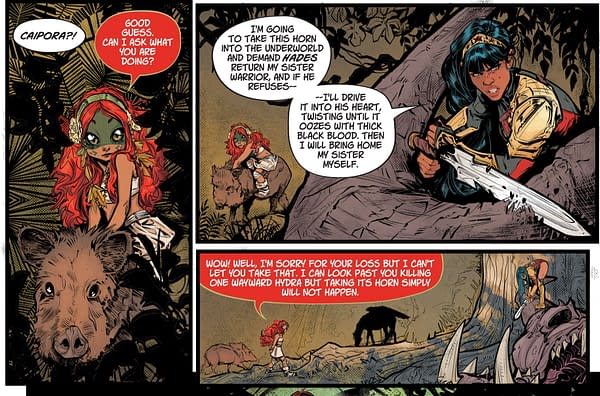 An unidentified and deliberately ambiguous narrator leads us through the early panels, which function as an introduction to Yara and this new timeline, her hot-headed personality, and her intention of freeing a fellow Amazonian from the grasp of Hades. That task requires the horn of a slain hydra, though such “poaching” is unacceptable to Caipora, a red-headed and mischievous forest entity from Brazilian mythology. Thus begins a descent into the Underworld through a Limbo that greatly resembles a subway station, and all the petty frustrations and bureaucracy you might expect from such an excursion.

As well as mashing together two disparate pantheons and representing a wealth of intriguing storytelling possibilities, Future State: Wonder Woman #1 is funny. The same could be said of Generations Shattered #1, but this book lacks that one’s timeline-spanning cosmic importance, and instead exists in a world that feels both totally separate and refreshingly new, despite the obvious familiarity of the Wonder Woman character. Yara’s personality, fiery and impatient, gives her a different vibe, but she’s surrounded by goofy elements that help to ground her, including the belligerent Pegasus Jerry, and the enigmatic Caipora.

It’s clear that DC is banking on this character being a hit, but the good news is that Future State: Wonder Woman #1 doesn’t suggest anything to the contrary. This is a fresh-feeling interpretation of the character, in a new setting and within a new publishing initiative dripping with storytelling potential.