A film of gradual creeping dread during a bright, sunny bonding session between troubled siblings. Beautifully observed and filmed with minimal budget and crew.

A film of gradual creeping dread during a bright, sunny bonding session between troubled siblings. Beautifully observed and filmed with minimal budget and crew.

For several years now, the example I’ve often given to friends of a great quality low budget film is The Battery. I think Threshold may be the new standard: it has two highly engaging characters, a story that feels real and it’s beautifully made. Doesn’t sound like a horror, does it?

Threshold sees Leo (Joey Millin) on a mission to find his sister Virginia (Madison West) and bring her home: she has a history of addiction, but she is loved, and Mom’s worried. Virginia is clearly struggling with something when he gets to her, but she’s adamant it isn’t drugs: it’s a curse. Leo’s naturally skeptical, but in the hope that this is what she needs, he offers to drive her across the country to get the curse lifted.

So what we have here is essentially a road trip film, during which Leo and Virginia get caught up with each other, find common ground again; and at the same time, Leo is drawn to support his sister, though he doesn’t understand what she’s going through. He can’t tell if she is withdrawing, deluded, or seeking attention, and there are moments when Virginia’s torment gets to him too. Excuse me if I start to repeat myself here, but these two siblings came across like utterly real people, and I think that’s partly to do with the brother/sister relationship. Brothers in films are often competitively macho or reserved, sisters can be bitchy; when there is one of each, I’ve observed a reluctant warmth. Think Donnie Darko, E.T., and – more recently – Dead Dicks. These two accommodate each other, acknowledging that it takes work to do so, and the years they’ve been apart disappear.

What also helps with how believable this pair are is the naturalistic performances. From the start, the almost-but-not-quite home video style and easy pace reminded me of The Endless (and when Leo and Virginia sang “The House of the Rising Sun”, that nod was clear). There were actually a number of similarities, including the journey to put something unhealthy behind them, the daylight creepiness, and one sibling’s gradual realization that he may not be on solid ground as he had thought. But that’s OK: I’d be perfectly happy to see many more films like The Endless. 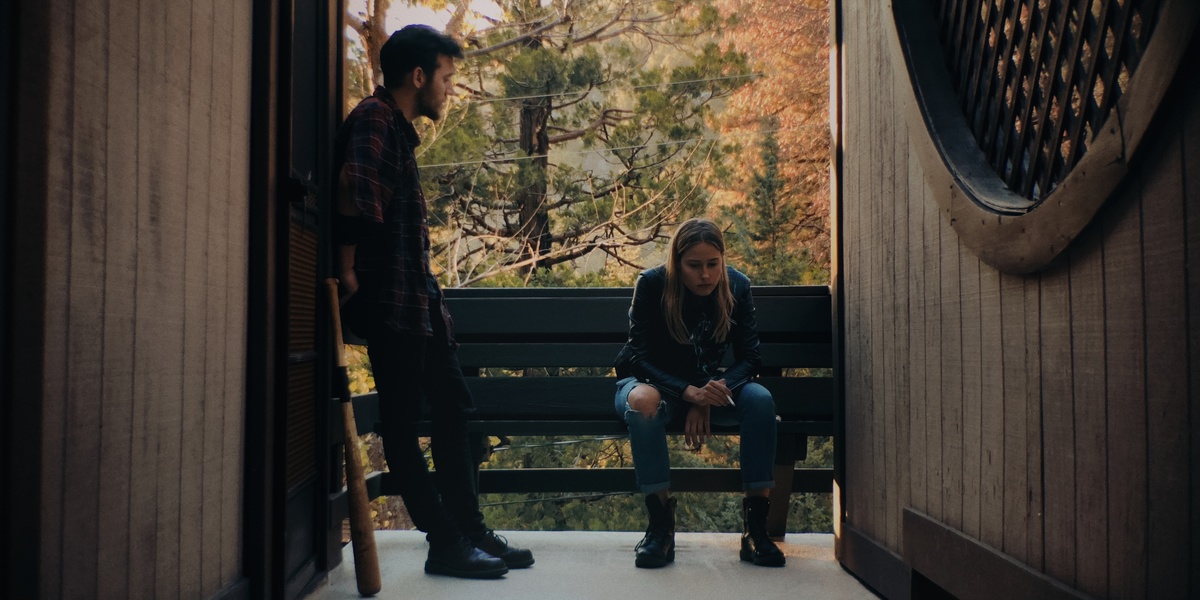 I feel like traits I admire in good films are often the same: believable characters, a story that looks and feels real, and so on. Directors Powell Robinson and Patrick R. Young achieved all that with Threshold, but here’s the thing: it was made on two iPhones by a crew of three over twelve days. Much of the dialogue was improvised, based on a family history that Young gave the two performers. And it’s beautiful: light, snow, pain, all filmed in such a way that this film does not look cheap in the slightest. Add Nick Chuba’s atmospheric yet unassuming score, and the dusty, seedy locations, and I’m drawn into Virginia’s experience as much as Leo is.

Don’t get me wrong: Threshold isn’t an easy-on-the-eye family drama. There are a couple of disturbing scenes and downright uneasy moments, but all of these fit the story and are not add-on shocks.

As I’m sure is obvious by now, I admired Threshold a great deal. More than the end result, though, I admired the way this filmmaking duo decided to pick up an idea and simply do it. Threshold had its UK premiere at Soho Horror Film Festival in November 2020 and will be available to watch on 2 April via Grimmfest’s Easter Horror Nights.