New horror based on old ideas and timeless drama. Much of it brilliant, though a change of tone partway through may lessen the impact.

New horror based on old ideas and timeless drama. Much of it brilliant, though a change of tone partway through may lessen the impact.

First, I saw Barbara Crampton getting excited about Jakob’s Wife on Twitter. A little while later, I received some very brief information from the film’s publicist, and on reading the full list of names involved, I got excited too. Jakob’s Wife is directed by Travis Stevens (The Girl on the Third Floor) and co-written with Stevens alongside Kathy Charles (Castle Freak) and Mark Steensland (The Special). And yes, the glorious Ms. Crampton plays the eponymous Wife, at the side of Larry Fessenden (Depraved), who plays Jakob.

I didn’t read any other reviews, watch the trailers, or even view the film images before watching, and I’m glad I didn’t: all of those give away spoilers, and I will shy away from those as much as I can. Those names alone – along with composer Tara Busch, whose name I didn’t spot until I pressed “play” – told me Jakob’s Wife came from a talented team; though by and large, they are names known to horror fandom, rather than a wider cinema audience.

From the start, I saw Stevens’ style in the simple location and the story that zoomed in on a single person’s outlook. A dry, crisp, small-town atmosphere is plainly presented, with a congregation shaking hands politely with Pastor Jakob Fedder (Fessenden) after his service, and his wife Anne Fedder (Crampton) a meek and pastel companion to complete the picture of comfortable and traditional domesticity. Over their thirty years of marriage though, Anne has gradually found herself living for his support and expectations, no longer entirely aware of her own needs beyond keep fit videos and perhaps catching up with an old friend from teenage years, Tom Low (Robert Rusler). After a slightly flirty meal, Anne and Tom go to check out the site of a community project Tom is booked to work on, and they have a shocking encounter there which changes Anne’s outlook.

Barbara Crampton’s performance in Jakob’s Wife, especially in the first half-hour or so, is the best I’ve seen of hers. Her portrayal of someone who is aware of the changes her life has gone through, but who has only just started to consider how she feels about them, is subtle, observant, and sympathetic. Fessenden’s – uncommonly clean-cut – Jakob, meanwhile is a solid patriarch; not bossy, but the sort who simply expects breakfast cooked for him and who doesn’t know what to do when it isn’t. When Anne starts to discover that she wants to “live bigger”, Jakob retracts: are the writers telling us that traditional marriages have to have a dominant partner? The story certainly presents such a marriage as stifling, and the introductory scenes (which some have considered too slow) form a near-perfect demonstration of a relationship in which one person has no idea there are any problems while the other is wondering why they didn’t notice years ago. 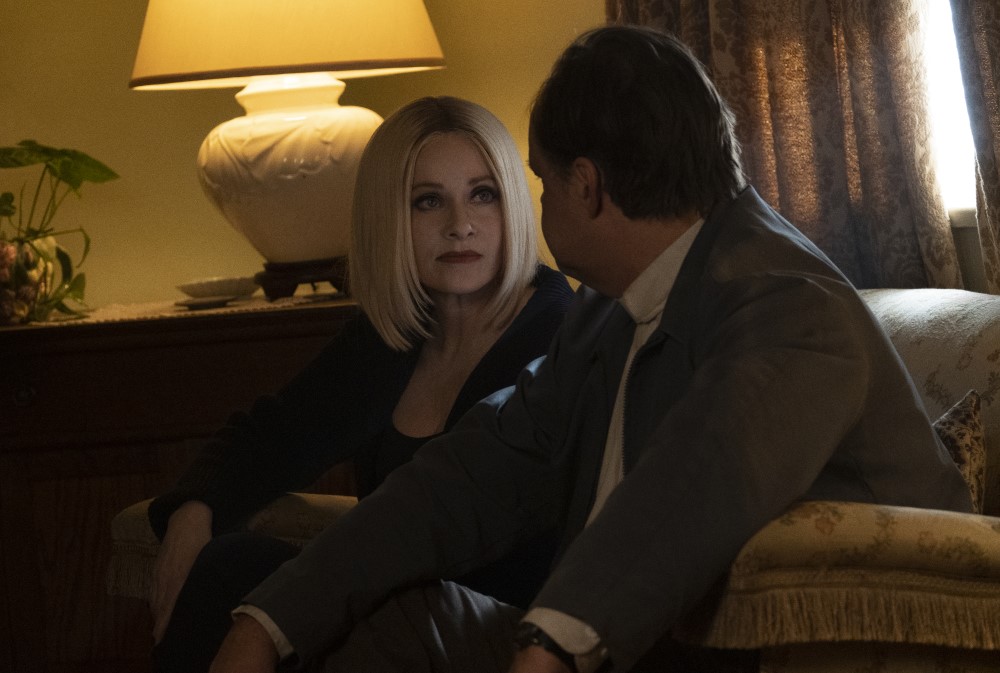 It probably seems like I’m describing a domestic drama so far, but trust me: Jakob’s Wife is certainly a horror (I’m just going to avoid being too specific), and once that nature shows itself it hardly stops. There is blood, a sinister Master, a violent death or two, and more blood. And more. Some will relish those scenes, though I got a lot more out of the near emancipation of Anne. The day after her night out with Tom was spent rediscovering what she enjoyed: she dressed differently, explored new foods (the close-up on her licking her finger was priceless), rearranged the furniture, danced, and started to think about how life could be different. These scenes were rich with sensory abandon, and tension too, as Jakob himself was unaware of what was happening, and as an audience, we could not guess the impact.

And sure, I enjoyed the horror aspects too, but what I did not appreciate was the change in the film’s tone. After roughly half an hour, when the exuberant blood flow started to present itself as a little more like a gush, the tense drama became somewhat comedic; or at least tried to, but because I was so invested in the marital transformations and the beautiful tension surrounding it, the dark slapstick couldn’t make me smile. The story still had plenty going for it, and the analogies to everyday sexism and mid-life crises were still in full play right to the end, but they no longer had the weight they’d been granted initially.

I do have some other positive comments, mind you. For one thing, it is incredibly refreshing to see Barbara Crampton (now over sixty years old) taking a central role in such a film, following the largely secondary or minor characters that she’s played since her You’re Next come-back. With Fessenden too just a few years younger, this is a rare film that focuses on a couple in their late middle-age, and with actors acting their age too, not denying it or covering it up. Another positive is the way familiar, somewhat traditional themes and tropes were given an updated twist; complemented by Tara Busch’s synthesizer music, which somehow straddles the line between modern and retro. It’s almost as though horror that we’ve been used to for many years – like familiar actors or a thirty-year marriage – is something we can wake up to and look at differently.

RLJE Films and Shudder will release the horror film Jakob’s Wife In Theaters, On Demand and Digital on April 16, 2021.