Children of the Whales / Kujira no Kora wa Saj? ni Utau is a Netflix Original Anime series based on a long-running Manga of the same name. Directed by Kyohei Ishiguro and written by Abu Umeda and Michiko Yokote, the series was first broadcast in Japan from October to December 2017 and then released globally via Netflix on March 13, 2018. Starring Natsuki Hanae, Manaka Iwami, and Yuuichirou Umehara.

Ready for some world building and head-tripping? Spend a few hours with the Netflix Anime Series Children of the Whales or otherwise known as ???????????? or Kujira no Kora wa Saj? ni Utau. 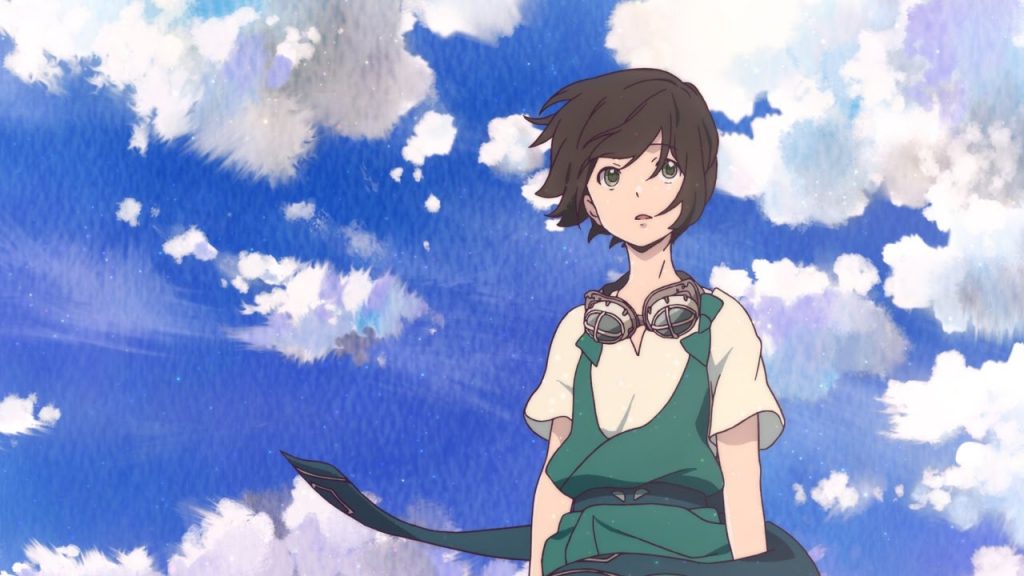 The Mud Whale is a large idyllic island which drifts across the sea of sand. Its inhabitants are made up of about 90% “Marked” people (who have telekinesis-like powers known as “thymia”) and 10% “Unmarked” people. However, the price the Marked pay for their special ability is that they rarely live past their twenties or thirties; the Unmarked who live much longer make up the Council of Elders, and they have kept the history of the island firmly to themselves. None of the people there has ever met people from beyond the island; for the most part, they are content, but some do struggle with strange rules which the Elders apply, such as keeping emotions in check at funerals.

The main story follows Chakuro who – although Marked – is clumsy and not good at using thymia; so his job is the community’s archivist or recording secretary. Like Star Trek Discovery, it is interesting that the main protagonist is not an important character – no warrior, sage or leader – so that he has the perspective of ignorance, able to find out and present what is going on, rather than knowing it all already; and removed from a good deal of the actions and decisions, having no strong agenda of his own. He happens to be amongst a group who go exploring another – apparently deserted and ruined – island which has drifted close to the Mud Whale, and finds a girl. She is anxious and in poor shape, so Chakuro brings her back when his group returns home, and thus his whole world is opened up. 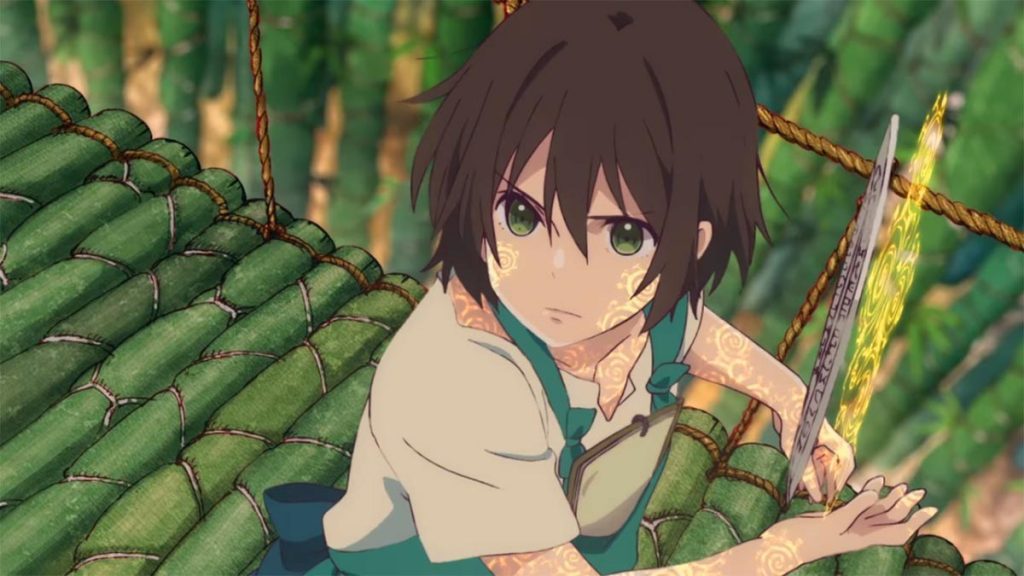 The first two episodes of Children of the Whales rapidly present this setting with as much depth – and beauty – as 50 minutes of fast talking will allow. Do pay attention clearly during those introductory episodes: there is a lot to take in – while the peaceful, folky atmosphere makes you at home – and as soon as the background is in place, then the main story arc kicks off from the end of episode 2 up to the end of episode 9. I shall avoid telling you too much beyond this point, except that there are plenty of questions to be answered (some more fully than others), a bad guy with pink hair, masked soldiers, melodrama, lots of killings (look out for the stylish one 17 minutes into episode 9) and lots of music. Children of the Whales has a bit of everything.

I must say I enjoyed the first half of the series a great deal, and then there seemed to be a period where the plot was difficult to pin down. It became both surreal and somewhat muddled in terms of how the resolution was reached. But episode 9 was gripping. The last three episodes could have been anti-climactic, but they became kind of an epilogue instead, bringing in new characters and some more explanations, with an ending both melancholic and hopeful. 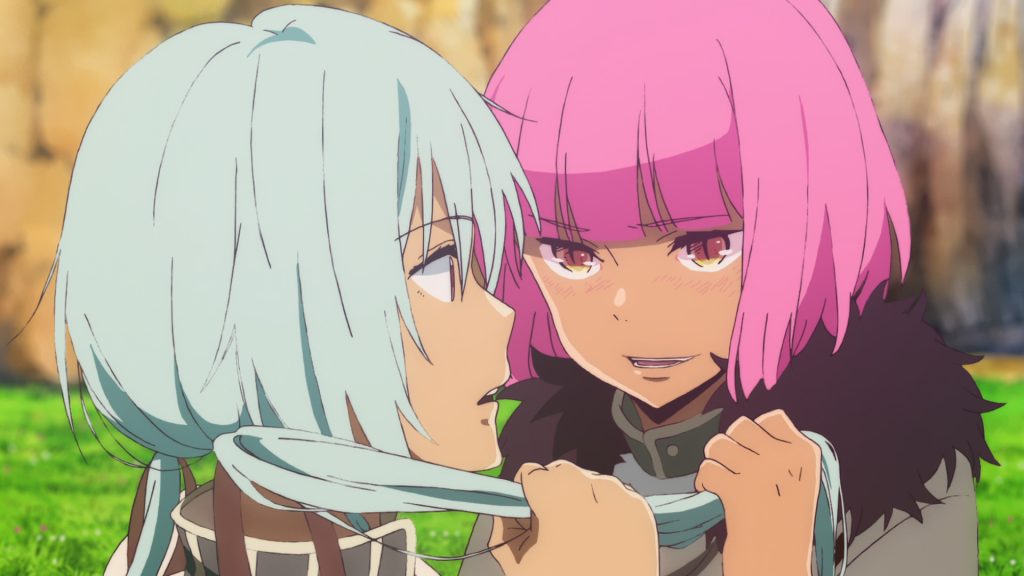 There was a very strong emphasis on emotions in Children of the Whales: emotions were to be reined in, not written about. But I’m afraid the story would have worked better – in my opinion – with that theme toned down somewhat, because what we saw on screen was so contradictory: everyone was so passionate! Chakuro was sensitive, Ryodari malicious and angry, Lykos sad… none of these was two-dimensional as such but definitely emotional. Watch the plot and the mythos take shape instead if I were you.

If I had one word for this Netflix Original Anime, though, it would be colorful! Although most of it takes place in one location, there is a huge range of beautiful watercolor-style images, which I hope I’ve given you a glimpse of here. The music, too, added some extra depth; though, in my opinion, there was a little too much of it. I accept having a song in each episode is fairly anime-standard, but some of the orchestral background scores were almost as loud as the dialogue (Talking of dialogue, it’s worth going with the English dub, rather than Japanese and English subtitles. The subtitles do simplify quite a bit). 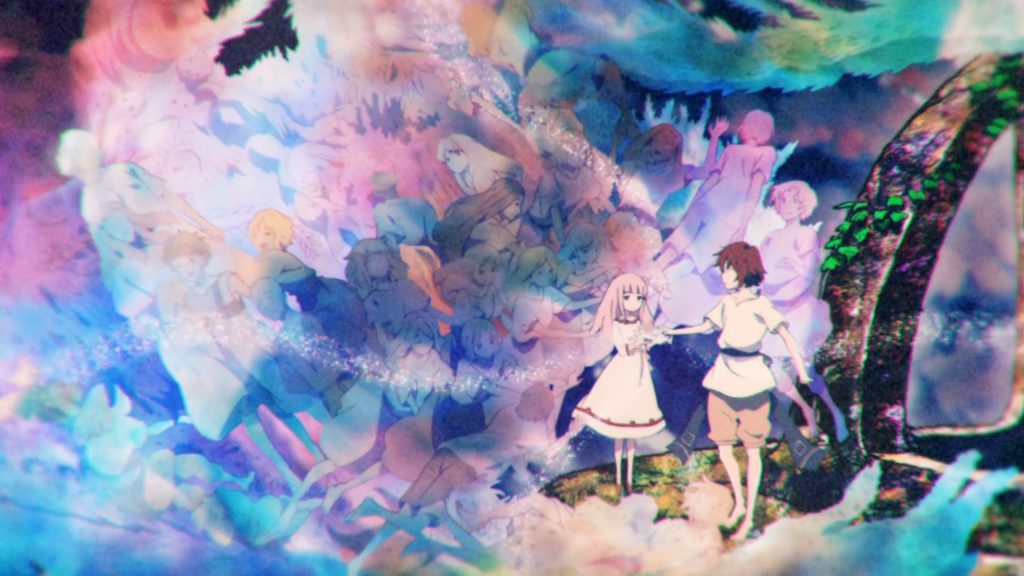 Apparently, a second season is planned, though I don’t know how soon; in the meantime, I would be interested to know how closely this series reflects the Manga. Overall, I would recommend Children of the Whales / Kujira no Kora wa Saj? ni Utau; especially if you have the time to invest in the characters and give yourself over to the whole landscape. And if you watched Blame!, you’ll be happy for the sunshine.