Love, Simon is a romantic comedy drama about an everyday teenager’s angst over fitting in and coming out as gay.  It was directed by Greg Berlanti and written by Elizabeth Berger and Isaac Aptaker, based on the novel “Simon vs. The Homo Sapiens Agenda” by Becky Albertalli. Simon was played by Nick Robinson and his parents by Jennifer Garner and Josh Duhamel.

Simon is a clean cut, regular seventeen-year-old, with a loving middle-class family and equally adoring friends; none of whom know that he’s gay. He has come to terms with his sexual identity over a few years but kept it private. Love, Simon is the story of his final year at high school, in which he discovers someone else is going through the same dilemma via the school’s Tumblr page and is obliged to come out of the closet.

Most of that you will have already picked up from the Love, Simon trailers. Why he is outted, how the people around him react, why he tried to keep his sexuality secret and all the incidents and consequences along the way… I’m not going to give away any of those details: it is the details and the way each character fits that makes the story so engaging and believable. And engaging it is: I don’t mind saying I cried twice; once for a painful moment and once for a happy one.

As with many films, the adult cast is more recognizable than the younger ones (I say “younger”, but actually most of the teenagers were played by actors several years older), but I have no doubt this film will make a few solid reputations. Simon himself is played very ably by Nick Robinson (Jurassic World, The 5th Wave); despite being on the screen so much you don’t get tired of him at all, being both a believable everyman and able to express the full range of emotions the role calls for. His friends (once you accept what a good looking, perfectly groomed and comfortably-off bunch they are) have well-rounded characters and gel together nicely as a group. Katherine Langford, Alexandra Shipp and Logan Miller are certainly names to follow as their careers progress; and it was great seeing Jorge Lendeborg Jr again, who stood out in Brigsby Bear. Simon’s family is made up of mother (Jennifer Garner), father (Josh Duhamel) and little sister… again, believable and very well cast. I guess they make up a twee and idealised nuclear family, but sod it: that’s a small concession to demonstrating just how unremarkable it is for a gay person to be part of a “normal” family.

And this leads me neatly to the overall style of the film and why I think it’s significant.

Love, Simon is essentially a teen romantic drama: “normal” family, quirky/cool students, pop music and contemporary social scenes, but different to pretty much all the others that the main character’s heart is aching for someone of his own gender. Teenagers can now go and see a same-sex romance in a film that shows it’s not much different than any other romance they’ve seen in any other mainstream film; and yes, this one is made and distributed by Fox (can’t get much more mainstream than that). Virtually every other same-sex romance portrayed in cinema is either tragic, indie, gritty, very grown-up or all four; not Love, Simon.  This film demonstrates once and for all that gay teenagers do not have to be treated like a separate demographic; they can have just the same kind of film as anyone else.

Brokeback Mountain and Moonlight may have been fabulous – and they were – but they were hardly written for fourteen-year-olds. And I really don’t want gay teenagers to grow up thinking what they have to look forward to is being treated differently all the time and tragedy. Love, Simon shows them that being a gay teenager isn’t easy (but hey, neither is being any other kind of teenager). And it also shows them a story in which coming out of the closet doesn’t change a person (tough though it can be) and neither does it make any difference to one’s true friends. And gay doesn’t have to mean stereotypes. Yes, lots of “ands” . Love, Simon really does have lots of positive and encouraging things for teenagers to see. (Not just teenagers, either: the film is family-friendly enough that I was comfortable taking my ten-year-old.)

This doesn’t mean the whole story is one righteous propaganda: the main character is a flawed and believable human, as are several others. For a good deal of the story, Simon is so wrapped up in his issues that he’s short-sighted and inconsiderate regarding his closest friends. There are some two-dimensional characters, sure, but not many: the key players have the same depth as the good old John Hughes classics, and the grown-ups on the periphery follow the formula he set too. But the director, Greg Berlanti, is openly gay himself, and it’s clear that he handled the topic with understanding, and the adaptation with respect. The tone of the film is warm and affectionate, rather than sensationalist or jokey (there are funny scenes/moments, but it’s not really a comedy as such, and those scenes are perfect for drawing in the audience more).

I must point out too that the music is very well chosen. Like any teen hit, the soundtrack is sharp and broad, with both modern tunes (from the Bleachers etc.) and old classics (Kinks, Jackson 5). And I was especially pleased with one diversion from soundtrack predictability: when a particularly painful scene took place, there was no ballad playing over Simon’s anguish, but an emotional instrumental piece which had the audience reeling with him. 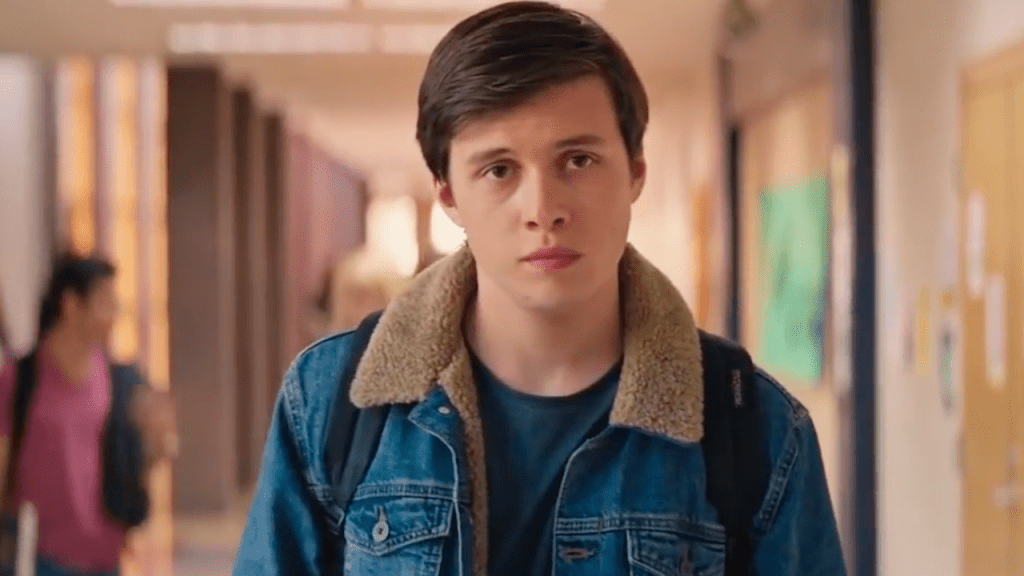 Love, Simon is a bloody good film; well made with a great story, memorable characters, and music to bounce along to, as well as providing the representation that many LGBT filmgoers have been craving. It isn’t perfect, of course, but (just like Black Panther) there is no separating it from its social importance.

(One of the imperfections is its minimizing of bisexuality – a character from the book was bisexual, but this isn’t touched on in the slightest.  Bisexual representation in films is a very sore point: one day, there will be a film with a key character who is bi, but not a s**t or a psycho… One day. Maybe when the book’s sequel is adapted for film?)

But let me close by telling you the best moment in Love, Simon: it was the moment when the entire audience applauded, in response to the climax of the main story arc. I saw the film twice at the cinema, and the audience was about eighty percent adolescent or teenage: they clapped and cheered at the same scene both times. The audience this film was made for has truly engaged with it, and that’s how I know it’s a quality and significant film.