Money Heist is a Spanish TV series created by Álex Pina, telling the story of a single crime, told across 22 episodes: eight robbers, organised and led by The Professor, break into The Royal Mint of Spain with the aim of taking home €2.4 billion.

Money Heist is a Spanish TV series created by Álex Pina, telling the story of a single crime, told across 22 episodes: eight robbers, organised and led by The Professor, break into The Royal Mint of Spain with the aim of taking home €2.4 billion.

Where to begin! There is such a lot to say about this show, so let me start with this nugget: whoever found this show for Netflix and acquired it from Antena 3 deserves a medal and a promotion. It had high ratings in Spain, was then swiftly edited into episode lengths that worked for Netflix, followed by consistently high ratings and – get this –  Money Heist became the most watched non-English language series on Netflix ever.

And I can see why. If the trailer hasn’t caught you, word of mouth might. It’s gripping and very difficult to switch off. I’m not usually the binging sort, but this was one of three Netflix thriller series I’ve found truly compulsive (the others being The Sinner and Dark).

Money Heist covers the story of one complex crime across the whole series (Parts 1 and 2 combined) and takes its time over it, while not once dragging its feet. It sent me back twenty years to Bocho’s Murder One, which had the same sense of what-the-Hell-else-can-they-throw-into-the-mix that this one did. But Money Heist doesn’t have a linear arc like Murder One did, but rather is more like The Sinner in terms of structure (only longer). The first episode sets the scene, introduces us to the main characters and presents the crime; and then each subsequent episode follows the people concerned, with flashbacks to expand on the background only where they are directly relevant to the progress of the plot. But that’s where the similarity with The Sinner ends. This is not a slow, contemplative type of drama, but fast-paced, with cliffhangers, surprises and an ensemble of characters you will think of as family by the end. It’s almost a high-quality soap opera in the guise of a thriller (some have likened Money Heist to Prison Break). 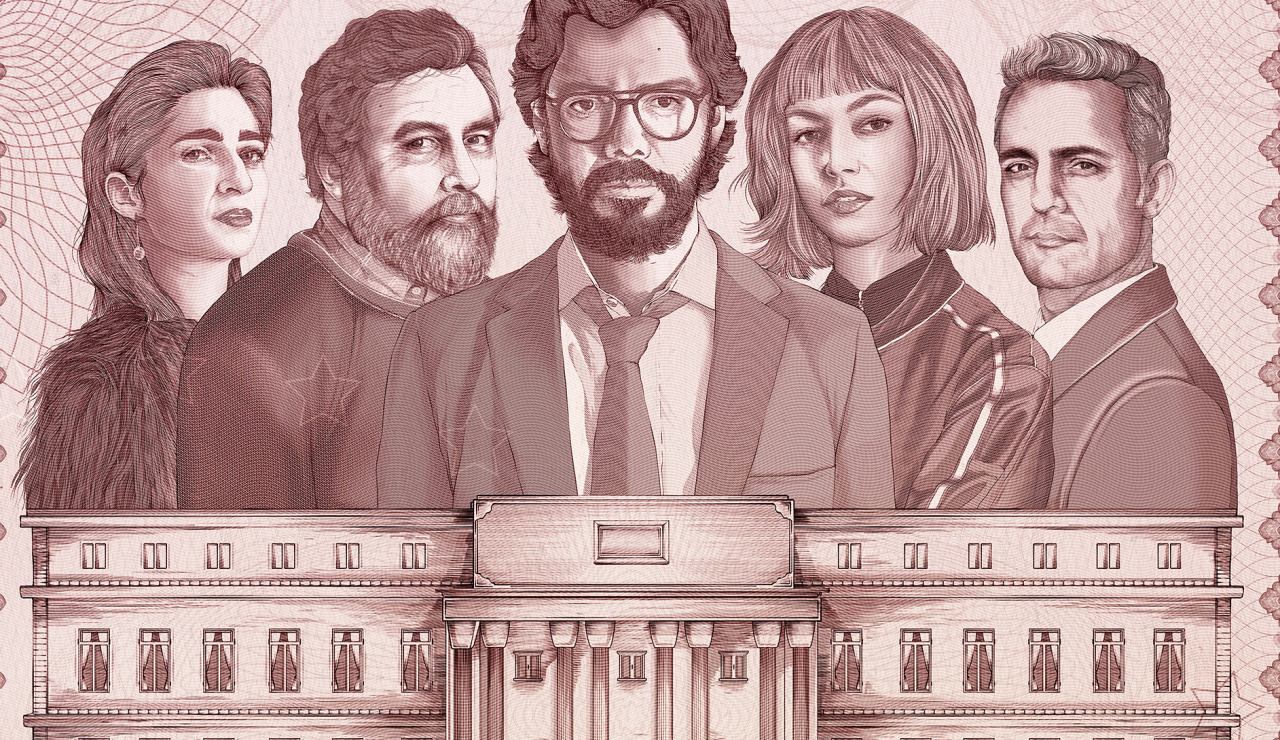 Episode one starts with a young woman (Úrsula Corberó) hiding from the police after a committing her fifteenth robbery with her boyfriend. He did not survive, unfortunately, and – feeling lucky to be alive – the young woman calls her mother to say goodbye so that she can make a clean break. She is our narrator for the series, and tells how just after this call a car pulls up alongside her and she meets the man who calls himself The Professor (Álvaro Morte). He persuades her to come and listen to his plan for a unique heist, where she meets the others he has recruited, and the Money Heist is born… its gestation being five months of study and planning in a large country house.

And that’s how I met The Professor, by pointing a gun at his balls. The good thing about relationships is that we end up forgetting how they started.

This first episode introduces the members of the gang (most of whom have never worked together or even met before) and The Professor’s rules for a successful plan, which include no bloodshed and no personal relationships. Because the team is not to get to know each other personally, they all select city names as aliases: Rio, Denver, etc.; our narrator is Tokyo. As characters, they may seem two-dimensional, but I promise you none of them stay that way: they all have depth and background that reveals itself to one degree or another over the course of the series. The suave Berlin (Pedro Alonso) and the extrovert Nairobi (Alba Flores) – “nuts but so damned funny” – are particularly notable, but as an ensemble, they are as well drawn and memorable as Mr. Pink, Mr White, et al from Reservoir Dogs. 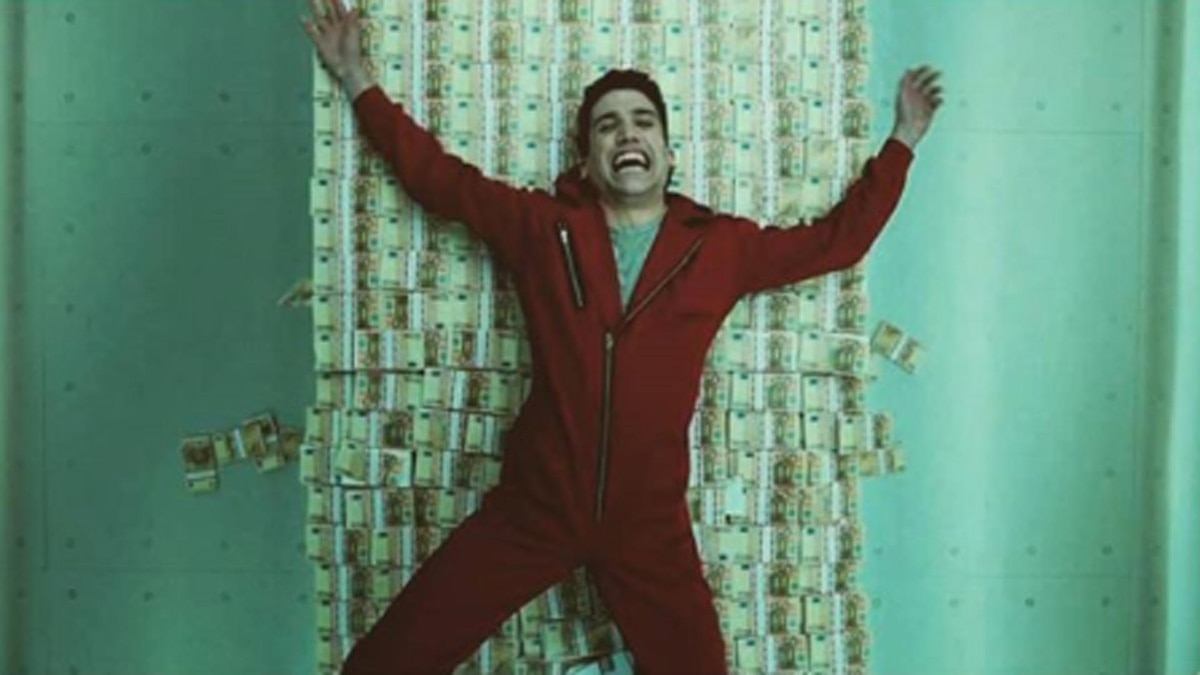 Half way through episode one, we also meet some of the people present inside the Royal Mint, destined to become hostages; staff and visitors, including a school field trip. And then in episode two, the focus turns to the police, who are trying to control the situation, investigate it and – primarily – communicate with The Professor, who manages the heist from the outside throughout. The viewpoint moves from the heist men to the hostages and the police as the story progresses (though always with Tokyo’s narration); and although this gave a well rounded view of the goings on, what was most interesting about this breadth of perspective was that the viewer rapidly loses any assumptions about who they should root for. As Inspector Raquel Murillo (Itziar Ituño) comments towards the end, it’s impossible to tell the good guys from the bad guys.

And increasingly as the show went on, I thought Pedro Almodovar must be proud: there was a sense of anarchy and rebellion all through Money Heist; amongst the police, the heist gang and the hostages alike. Oh and other factors, too, such as several instances of sex with an unwise choice of partner, and a colourful, energetic production. I know nothing about Álex Pina (though I shall be hunting down his other show, Locked Up), but Almodovar’s influence is very clear. 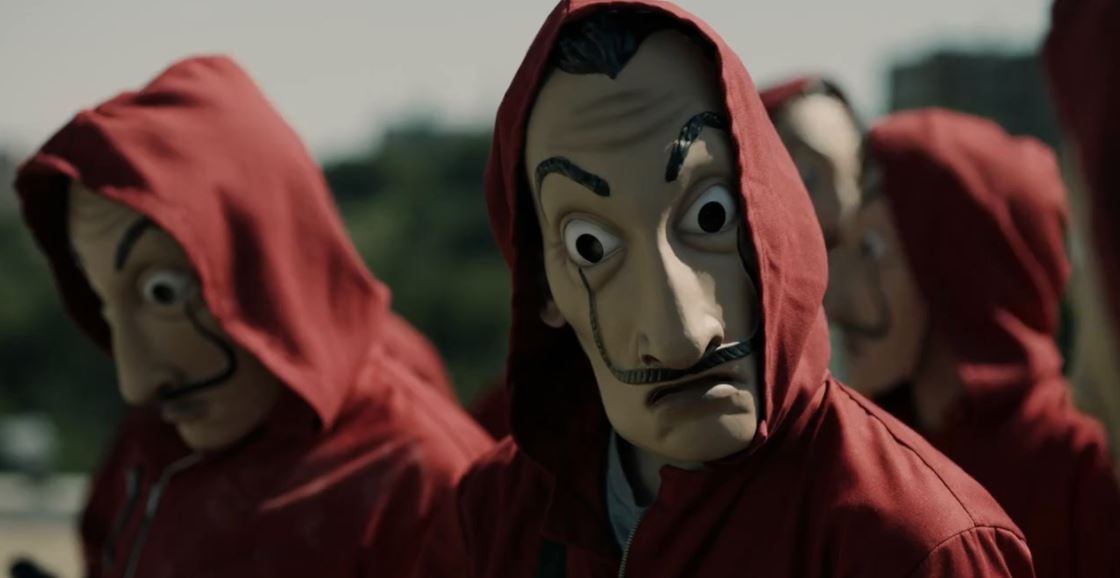 The acting was perfectly fine across the board, though not many of the roles appeared to be especially demanding. Most of the actors showed a slight hint of melodrama; though considering how widespread this was, and how it corresponds with both the soap opera and Almodovar styles, that’s not an issue. More nuanced expression was there when called for, though, most notably in a couple of minor characters: Mónica Gaztambide (Esther Acebo) and Raquel’s mother.

Back to what I was saying about The Professor’s rules… One of them is broken pretty much straight away, leading me to wonder at first if his terrific lessons were essentially outlining what was likely to go wrong; but trust me, Money Heist does not turn out to be a predictable show. Granted, there are TV tropes scattered throughout, not to mention a few cliches, but that doesn’t mean you can tell at any point what’s going to happen or how things well turn out. See, I enjoyed Money Heist a great deal (can you tell?), but that doesn’t mean I’m blind to its faults. I can excuse some of them, though. The tropes serve to make the viewer feel familiar with what’s going on in the show; and the more comfortable the viewer is, the more effective the surprises are. Some have called the show far-fetched, and yes, I guess so, but what action thriller isn’t, to some degree. In the case of Money Heist, though, the writing and direction are so tense and tight that it’s easy to simply accept what’s in front of you.

The writing is bloody good.

And yes, you can watch the entire Money Heist now on Netflix: what Netflix presents as Part 1 and Part 2 together comprise the whole of the series as broadcast late in 2017 on Spanish television. You may have heard about a third part: Part 3 will apparently be made up of new heists devised by The Professor, to be unveiled in 2019.