Over the Garden Wall Review

Over the Garden Wall is an animated mini-series, created for Cartoon Network by Patrick McHale. It is about two brothers looking for their way home through a fantastical forest, and it is a work of art.

Over the Garden Wall is an animated mini-series, created for Cartoon Network by Patrick McHale. It is about two brothers looking for their way home through a fantastical forest, and it is a work of art.

Somewhere lost in the clouded annals of history lies a place that few have seen; a mysterious place called The Unknown, where long forgotten stories are revealed to those who travel through the wood.

Those words, after a few seemingly random (they’re not) surreal images and a beautifully sung theme tune set the scene at the start of Over the Garden Wall… 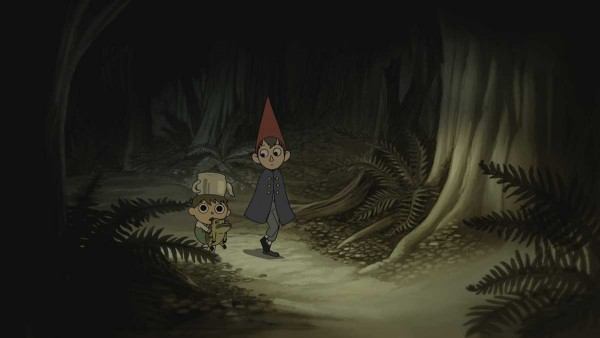 And there, we meet Wirt (Elijah Wood) and Greg (Collin Dean), two brothers, walking through the forest. Wirt is the one in the picture above with the red pointy hat, and Greg is the one with the teapot on his head (don’t ask). I would guess Wirt is fourteen or so, and Greg about five, but I don’t think many facts about them are ever given; their characters, though, are beautifully drawn, and equally well acted. Wirt is intellectual, and a doomed romantic at heart; in contrast, Greg is an utter joy, with as much optimism as imagination. He’s pretty much everyone’s favorite character (except for those who prefer the Rock or Greg’s frog). 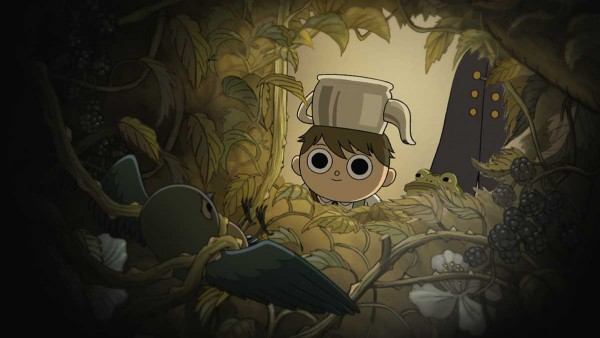 Wirt and Greg are walking through the forest to get home (though we aren’t told from where), but they’ve evidently lost their way; it takes ten short episodes to get them there. This is not a cartoon to dip into, but a complete and highly rewarding story arc. There are mysteries, adventures, creepy characters and talking animals along the way. Think Quantum Leap (yeah, but with animals), or – better still – The Wizard of Oz (and with just as many more songs). 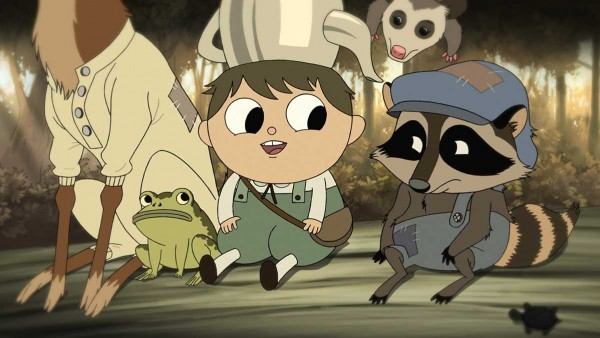 The songs! A mixture of jazz, ragtime, big band waltz, opera and childish nonsense (my son still sings “Potatoes and Molasses” nearly every day), there is a song in every episode of Over the Garden Wall, including a rather miraculous song by Greg’s frog, voiced by Jack Jones! They are all relevant to the plot: no time for boring fillers when each episode is less than eleven minutes long! 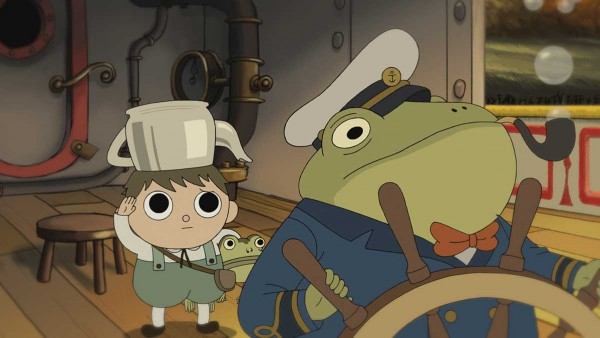 Yes, that was Jack Jones, the big band and early pop performer. And Wirt is indeed Elijah Wood of Lord of the Rings/Cooties/Maniac fame. There are more famous names and voices here too, though Cartoon Network (and now Netflix) do not make a big deal about them. Christopher Lloyd plays the pivotal role of the Woodsman, and John Cleese plays two (very contrasting) roles. Melanie Lynskey (who you may recall as the girl from Heavenly Creatures who did not grow up to be Kate Winslett) plays a tragic and sarcastic bluebird. And believe it or not, some less important characters are played by Tim Curry and Chris Isaak. 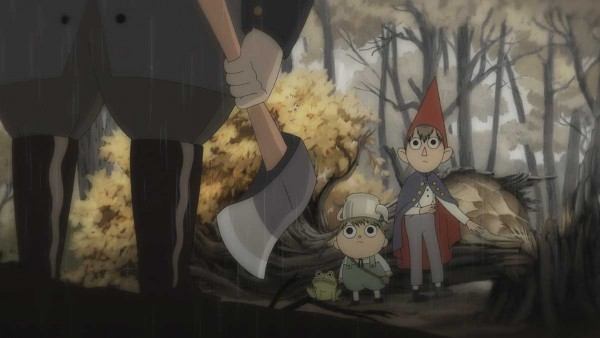 So back to the story. Each episode (or more correctly, chapter) is an adventure set at a new location on the brothers’ quest to get home; sometimes with them following clues and sometimes just following their noses. Some of the characters and settings may seem comfortably familiar, as though they had been inspired by Brer Rabbit, Huckleberry Finn, or maybe early Disney; yet none of those cultural icons are directly referenced. It’s like McHale had a great big Americana chowder one night and then wrote down his dreams the next day. (That’s not really how it happened… He wrote a pilot first, Tome of  the Unknown; Over the Garden Wall came sometime later.)

Alongside that fairy tale quest, there is a growing black cloud. The residents of The Unknown are in fear of The Beast, and it is apparent that Wirt and Greg will be more susceptible to his spell the longer they remain lost (I won’t tell you what the risk is, but oh you will shiver all over when you realize). And lost they are indeed, so there comes a time when finding their way home becomes desperate… Even more so when it is revealed how they got lost in the first place. The story is increasingly tense leading up to those final episodes, and truly emotional at the end. This is a series to watch with your child: don’t give it to them to watch on their own. 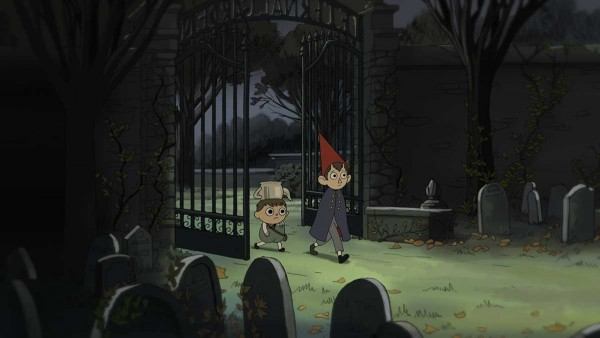 If you do watch this with your child, there is no doubt you’ll notice many sinister touches that would go over their heads. There are several classical references to death and the afterlife, for example; and a good deal of the more serious aspects of the show may not touch a child who only watched occasional episodes. That was the case for my son (who watched it about a year ago, when Over the Garden Wall was first repeated on Cartoon Network); but when he watched the whole thing with us upon its arrival on Netflix, understanding of what had been really going on in the Unknown crept over him and he spent the last episode in tears. Yet as I mentioned earlier, he still loves the show; the stressful ending has taken nothing away from the joy of animals playing instruments, rock facts, hunting for frogs, or the bluebird code. Death isn’t the only theme, mind you, just one to warn you about: there are also some more palatable ones about family relationships, honor, determination and seeing things in a positive light.

I realize I’ve not said anything yet about the animation… I haven’t got the artistic language to describe the style, so allow me to gush a little more: it’s a cross between color-rich paintings and a series of dreams. If you’re at all familiar with McHale’s other work, such as Adventure Time, that might make sense… If not, just trust me, and you’ll see. 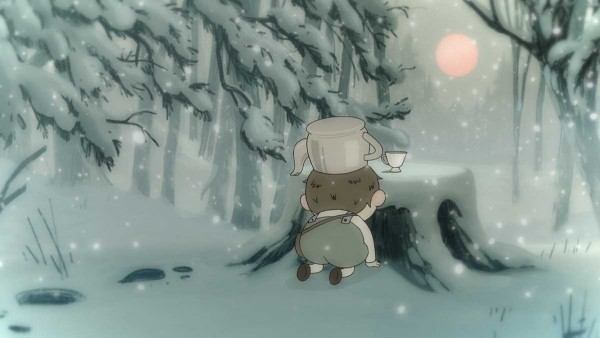 The story of Wirt and Greg in Over the Garden Wall is complete; I still find it remarkable just how comprehensive that story is in just ten eleven-minute episodes. But I was excited to discover that as well as the limited run of comics a couple of years ago (which filled in some gaps about peripheral characters), a new graphic novel is due out at the end of 2018. In the meantime, I’ll keep rewatching Over the Garden Wall, and recommending it to everyone.