A group of teenagers go for a weekend’s camping at a beautiful, secluded wood in Mexico. Two of them stepped over a line. What do you think happened next?

A group of teenagers go for a weekend’s camping at a beautiful, secluded wood in Mexico. Two of them stepped over a line. What do you think happened next?

How many Mexican horror films can you name? I have seen a few: Cronos (Guillermo del Toro), We Are What We Are (Jorge Michel Grau), The Devil’s Backbone (Guillermo del Toro), The Similars (Isaac Ezban). There are plenty more of course, but the films I have seen have led me to expect something tightly written at least, and with careful, unhurried production. Romina had some of that but was sorely let down by an ending that raised more questions than it answered.

It opens with a young woman, Romina (Francisca Lozano) being questioned about her perspective on an incident, presumably by a psychologist or similar. He says, “I need you to tell me if you were a participant, victim or witness of the multiple homicides that took place at Crystal Lake on June 27th, 2016.” And she just calmly shakes her head. The gesture caught my interest, despite the groan brought on by reference to Crystal Lake. Then we see a brief glance over the crime scene, and the rest of the film is the actual events themselves.

I think I’ve seen more horror/thriller films involving young people camping or hiking in the woods than I have Mexican horrors, actually. Friday the 13th is the famous one set at Camp Crystal Lake, of course; then more recently there’s Eden Lake, Redwood, Camp Killer, etc. Basically, put teenagers in the woods or near a secluded lake and there’s going to be trouble. There was so much that was familiar to me in the first half of the film that I knew it could go in one of several standard directions, but couldn’t tell which. I’m not going to say exactly what it brought to mind at that point, as the plot was so slight that it would very easily be spoiled.

That first half – like Ritual – focused on getting to know the group of campers. They are a mixture of couples and singles, some of whom like each other and some who don’t. As a group, the conversations and one-upmanship are pretty believable, but I couldn’t say I could distinguish one from another. Except that one of them who committed the misdeed wore shorts. There was one girl from school they didn’t invite; but strangely enough, she was staying there too. The acting was pretty good from everyone, so it’s a bit of an insult that only Lozano is credited on IMDb. Therefore, I can’t tell what roles each of these people played, but I’d like to credit them anyway: Oliver Nava, Arantza Ruiz, Claudia Zepeda, Walter Bercht, Roberto Beck, Victor Bonilla, Eduardo Negrete. 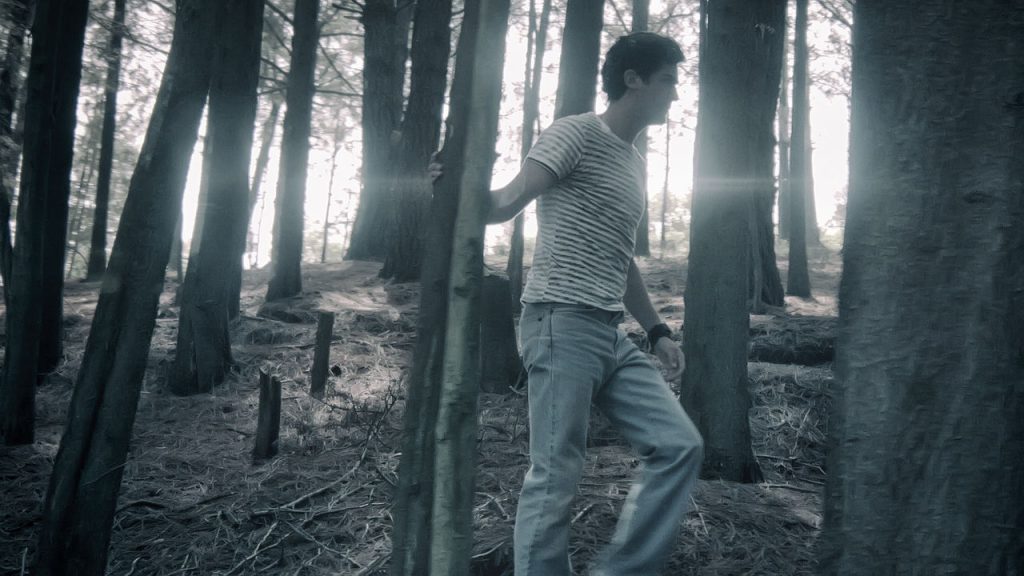 As the halfway point was passed, it steadily became clear that Romina belonged in the “slasher” subcategory. That said, most of the violence was not explicitly shown. I don’t know if this was because of a low budget, or because Diego Cohen (writer and director) wanted to avoid an 18 certificate; but there was nudity, and some misogynist rape jokes, so maybe that’s why Netflix designated Romina as “adult”.

The direction was pretty good, and I liked the attention given to setting the scene. That said, Romina was not an exciting film, and I didn’t even feel much sympathy for Romina herself, as the crime against her was not shown, and the script spent no time on her like it did with the others.

There was much less attention given to the characters in the second half, never mind motivation. And although I had been happy with how believable the dialogue had been in the first half, the script seemed to get far-fetched. Yes, I know slashers can be far-fetched by definition, but I’m still going to hope for something better; especially as the first half sparked some of that hope. I’m not so bothered about motivations being explained: if these things were happening for real, it’s unlikely the victims would be told what was behind it all, like with some James Bond villain. And if they all knew each other, there’s a lot that would be understood anyway. But it would be confusing for some people.

The camera work, the largely synth score, and the production, in general, were all perfectly decent. It was only the way the killings were carried out just out of view which gave away what may have been budget issues. Basically, Romina didn’t provide anything new, except for some sound young actors. I’ll happily look out for anything else written or directed by Cohen, in the hope that he has more resources for future projects. But if you’re interested in Mexican films, I’d recommend checking out Isaac Ezban instead, who has two films on Netflix at present.