There are a lot of lessons and inspirations that can be taken from Quincy, presenting a legend that created a legacy that will last a lifetime.

There are a lot of lessons and inspirations that can be taken from Quincy, presenting a legend that created a legacy that will last a lifetime.

In a recent podcast episode, we discussed multi-talented stars and whether they are born with it or if they achieve their skills with an unrivalled work ethic. The co-host, Jonathon Wilson, argued the former, that some people are just born with it. After watching Quincy, the latest Netflix original documentary, I’d argue that it is both. There are probably a lot of people out there who have the untapped potential, which is not realised due to unnecessary procrastination. If you learn anything from Quincy apart from the obvious, then you will learn that Quincy Jones held both unnatural talent, but accompanied it with energy that is difficult to compete with.

In fact, the documentary opens up with Dr Dre discussing the culturally significant American record producer, singer and film producer. The Netflix original is so soaked in respect that the feature is an appreciation of Quincy Jones, rather than a flurry of archived footage to build a narrative. It helps that Quincy narrates a majority of the documentary, making it his account of how the major events played out. Early on in Quincy, a person remarks along these lines: “There is no point in trying to compete with him; you will not be able to do it”. As the documentary progresses, it is difficult to argue against that. 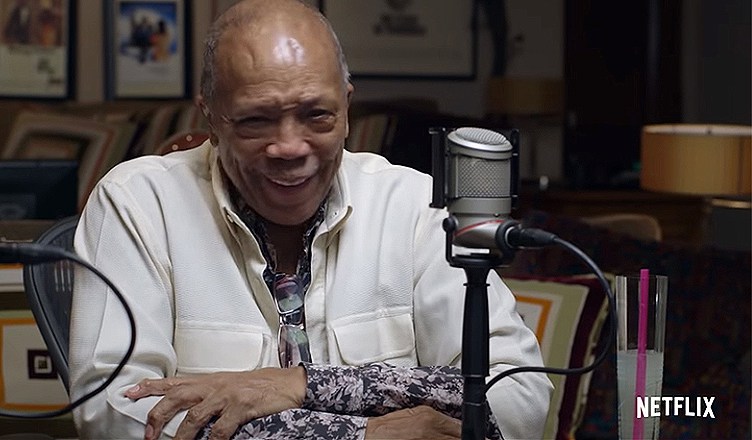 Quincy does show the downsides to the life of an auteur. The family is discussed in length, how his career did not enable him to fulfil his role as a father and a husband, causing breakdowns in his relationships. His mind was always working, which contributed to more collaborations and more fun. The Netflix documentary scopes it as a half-hearted negative to his career and instead angles it slightly in a way that marks it as a sacrifice. However, Quincy at various moments shows how being a workaholic has caused the legend to almost die too soon. The documentary faces you with footage where he nearly collapses from heart pains on stage; this is quite the chilling moment, witnessing the legend calling for his assistant as he struggles to keep standing.

Putting aside the negative side-effects to such a career-driven life, the documentary eventually articulates his collaborations; it is weirdly nostalgic to see the American producer work with the young Michael Jackson, and the influence Quincy Jones had on his records, and even the famous “Thriller” music video. It’s influential to see how his work-ethic broke down racial walls with his award nominations and the opportunity to orchestrate for the Oscars.

What is clear is that Quincy Jones is a one of kind. The Netflix documentary wants you to understand that his contributions will always live on. Quincy gives you a lesson on life, from the words of Quincy himself but outside of his trials and tribulations to his personal life, the documentary also shows what can be achieved if you work hard to live for your vision.