Jackson and his reluctant sister Angela offer a fake ghostbusting service to “cleanse” the homes of gullible Scots. But when Angela starts to see and hear things, is she losing it, or are there really ghosts? And if there are, what could they want?

Jackson and his reluctant sister Angela offer a fake ghostbusting service to “cleanse” the homes of gullible Scots. But when Angela starts to see and hear things, is she losing it, or are there really ghosts? And if there are, what could they want?


Malevolent is an unusual beast: it was made in the USA, filmed in Glasgow, directed by a man from Iceland; it stars just a couple of moderately famous faces and is the best Netflix Original horror film I’ve seen.

Honestly, I’d rather put this laptop down and go watch it again.

Ben Lloyd-Hughes plays Jackson, a resourceful yet cash-strapped young man, who has failed with a number of get-rich-quick schemes but has one now that works: he manages a little team who will “cleanse” homes of spooks and spirits. The main star of that team is his sister Angela (played beautifully by Florence Pugh), who pretends to have a gift of communicating with these spirits and can, therefore, ask if they “would consider leaving” the house in question. Then there are two others – Eliot (Scott Chambers) and Beth (Georgina Bevan) – there to look techy and wield equipment borrowed from the local university, where Angela is currently too distracted to pass her course.

We see a fairly typical assignment where they leave a homeowner satisfied – just to set the scene of who they all are – but during that gig, Angela starts to wonder if she really can see ghosts after all.

And then, Angela picks up a call from Mrs Green (the fabulous Celia Imrie), which is where Malevolent‘s main story starts. Mrs Green’s home used to house foster children, some of whom were apparently killed by a family member some years ago, but now she is hearing screams and – naturally – wants them to be quiet.

Of course, I’m not going to tell you what happens when they get to that house; and I’d suggest you avoid the trailer… just go with the images, the cast’s reputation and my recommendation, and watch the film. It’s not long, but it’s also unhurried, while still packing an effective punch.

Most of the cast is young, though extremely effective: every one is well cast, though Florence Pugh stands out. She’s been in some pretty serious dramas, including Marcella, The Falling and the lead in Lady Macbeth; and apparently, she’s going to go on to King Lear and Little Women next year (via a less serious role in The Commuter). In Malevolent, her Angela cares deeply; both for her family and the people her brother’s little initiative claims to help. She’s very clearly burdened and it’s heart-wrenching to watch at times… but she impressed me and I’m going to seek out those other titles.

Celia Imrie, of course, is a British acting treasure; most familiar in comedy television shows, though over the years has picked up roles in large films too. In Malevolent, her Mrs Green is a fairly traditional Glasgow woman who keeps everything locked away; quite appropriate for this role. This film has given me an increasing respect for her, though I’m never going to see her the same way again.

Malevolent was directed by Olaf de Fleur, a name I’d not heard of until now. He’s been responsible for quite a variety of dramas and documentaries, though I believe this is his first horror. I couldn’t say how familiar he (or the writers) are with the English language but there seemed to be no issue in this film. The direction is smooth and marries with the writing, acting and production so well that it’s difficult to see exactly where the quality lies. There are sinister people and creepy sets and – just as the developing story demands – there is a lovely ambiguity about whether the unsettling things we see are the result of characters losing their grip, or whether ghosts are really there; and of course that uncertainty means the viewer does not know what to expect, or what they saw either (I found myself rewinding, just to be sure, once or twice). 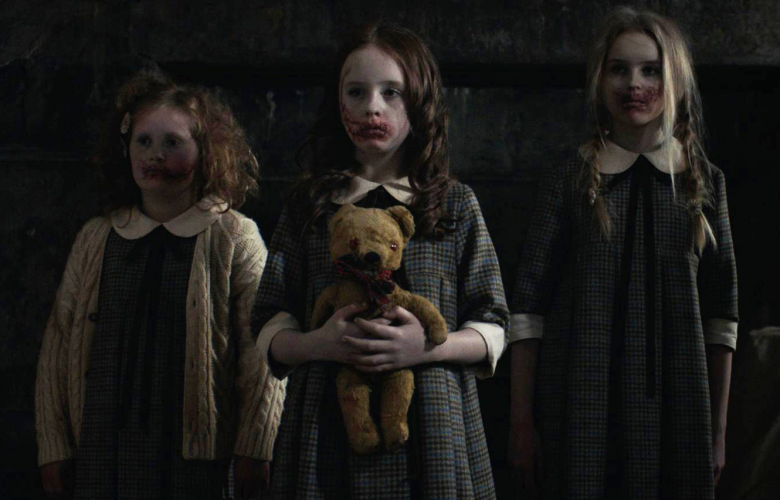 And yes, it is bloody creepy. And bloody; though the violence – when it comes – is not too explicit. But bear in mind that Malevolent is not just about the possibility of ghosts, but also the reason for them to be there: remember The Sixth Sense? There was no explicit violence, but some deeply nasty images which made clear what had happened to the deceased; in the same way, Malevolent is not one to enjoy over Halloween with kids!

Trust me, damn near everything in this film is effective, though; even the odd jump scare (especially the very first). The reactions to ghosts and revelations are believable, the effect of injury is realistic… but even the slightly unrealistic or unexplained elements (old teddy bears left conveniently in the cellar) are so sharply realised that I don’t mind at all. Al Hardiman’s score made a huge impact on the atmosphere: gentle songs at times, light choral music at others, and incidental music which was rarely overdone. I wish more horror films were given such careful treatment: they would be granted much more respect.

There were, naturally, a couple of issues; but only one I can raise without risking a spoiler: I cannot see why Malevolent was set in 1986. The only reason I can think of is to remove the easy out of a mobile phone (or easy cliche of poor phone reception). But maybe there was more of a reason given in the book it was based on. Nevertheless, the flaws are minor: watch the film, and let me know if you agree.

I’m going to watch it again.