House of Cards season 6 has one major unavoidable problem, but Robin Wright does the absolute best to bring it home.

House of Cards season 6 has one major unavoidable problem, but Robin Wright does the absolute best to bring it home.

When the last season drew its curtains with Francis Underwood in a contained rage, many of us felt dirtily selfish regarding the news of Kevin Spacey caught up in a fire of sexual assault accusations. As Dave Chapelle claimed in his latest Netflix stand-up, we all wanted to see how this played out. Instead, justice was served, and rightfully so, but the less important result is that we got a re-constructed House of Cards season 6, which plays on an almost separate timeline of events that feels depressingly disjointed.

The question pursed on a number of people’s lips will be whether Netflix has managed to weather the scandal and salvage a story that many saw as one of the greatest. Unfortunately, that means being the elephant in the room; House of Cards season 6 is simply good – well-written, in places featuring awards-worthy performances, and articulates a storyline we’ve all become accustomed to in the Netflix series. The issue is that the latest instalment is not great, which is at no fault on the show’s writers. House of Cards has that unavoidable void which is shaped like Francis Underwood.

This is no blemish to Robin Wright’s skill at acting; in fact, if anyone pitched a series where she was the core character from the beginning, I believe a number of executives would snap her up. Her character Claire Underwood is not only the first female president of the United States but unprecedently she is facing the repercussions of the sudden death of her husband, Francis. Madam President’s first task is not only to run the country but to face her critics and those who actively protest against her due to tense political times. Claire’s ultimate task is to rid the memory of Francis Underwood but also rid the subpoenas and legal challenges that come her way due to the mess he left behind.

Unfortunately, Claire Underwood’s objectives make the latest and final season of House of Cards far too ironic; in one hand the show recognises the memory of Francis Underwood but on the other plays a story where Claire is trying to remove him from the history of the show. House of Cards season 6 is almost a reflection of the ordeal the show’s producers were facing; the entire series up until now was induced by Francis’ world and his sinister twisted vision, that to try and continue the story and make him a spirit of the script makes the final season feel empty. Robin Wright did all she can to perform her socks off in order to give it a deserved farewell, but this is the first time she looked directly at the camera to the audience and spoke. It’s difficult to separate and forget how that felt under her predecessor.

The story is fine, which is the minimum I would expect. The themes centring around female empowerment and overcoming the world of men were to be expected. There are also a few flashbacks that revert back to Claire’s childhood, which is designed to help the audience connect with the president. I found issue with the fact that Claire Underwood, as we know, is not necessarily a nice person, even if her husband orchestrated most of the plotting, so this idea that we can understand from a perspective of sympathy is undone by her speeches to the camera. 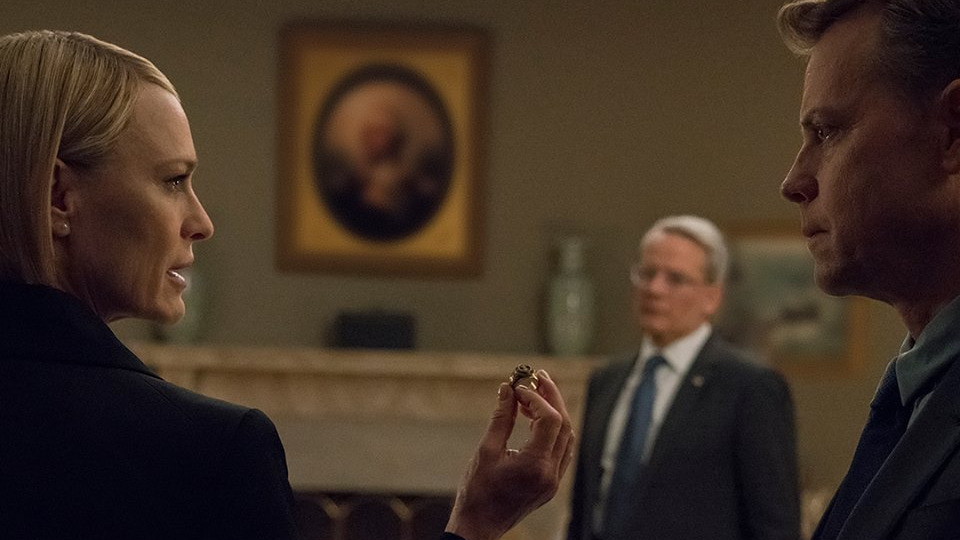 The usual suspects return: Doug Stamper (Michael Kelly) is exiting rehab and battling with Francis’ memory whilst at the same time is trying to give himself a place in the White House; you are not entirely sure for a few episodes what his true motives are. Vice President Mark Usher (Campbell Scott) is a troubling character to gain a grip on, as he’s too nice to be wholly manipulative but he serves as a nuisance to Claire Underwood due to his strong ties to the newly-introduced siblings Annette (Diane Lane) and Bill Shepherd (Greg Kinnear), the inheritors of an industrial conglomerate and members of a family with the power to influence American politics.

House of Cards season 6 presents a lot of challenges for Claire Underwood to deal with in its final curtains, however, the insurmountable challenge was to deal with the obvious. The House of Cards boss has recently been quoted as saying that it would have been a big mistake to just erase Kevin Spacey from the final season, but maybe, just maybe, it was a bigger mistake running this series into the ground.