“Doomsday” was the most character-driven episode of FBI, while also providing an interesting sabotage plot that broached the debate on legality vs. morality.

“Doomsday” was the most character-driven episode of FBI, while also providing an interesting sabotage plot that broached the debate on legality vs. morality.


This recap of FBI Episode 5, “Doomsday”, contains spoilers. You can check out our thoughts on the previous episode by clicking these words.

“Doomsday”, the fifth episode of FBI, opens with a classic switcheroo. At a nuclear power plant, armed intruders are braying on the doors and vital systems are shutting down. It’s all a training exercise, obviously, but when it’s over, the alarms keep blaring. Outside, there’s a woman with a very real hole in her head.

The woman’s name is Cameron Porter, an investigator for the Inspector General’s office. She’s also radioactive. Evidence points to clear sabotage while she was on-site, which is a problem because she wasn’t even supposed to be on-site – the plant wasn’t due an inspection, and there’s the persistent “catch-22” of nuclear plants in general; they provide power to a whole city, but if something goes wrong, they can destroy that same city just as easily.

Special Agents Maggie Bell (Missy Peregrym) and Omar Adom ‘OA’ Zidan (Zeeko Zaki) are, as always, on the case, which is interesting because anyone who had the expertise to sabotage the plant didn’t have a motive – most of the staff live locally, and would be the first to suffer in a disaster. Cameron argued publicly with one of the employees, but everyone else seemed to like her. She was a driven careerist and spent most of her time alone – “Sound familiar?” quips OA to Maggie – but she was regarded as fair and reasonable. It doesn’t make much sense that she’d allow someone into a restricted area to perform a calamitous act of sabotage.

Except, of course, if that someone was her boyfriend, Jake Fletcher, a nuclear engineer and a proud entrant on the FBI’s most-wanted list after having leaked plant security information. He considers himself to be a whistle-blower who was set up for exposing malfeasance, but during his overseas exile he has been known to meet with unsavoury characters from unsavoury countries, so OA, not unreasonably, surmises that he’s a traitor out for revenge against his country. 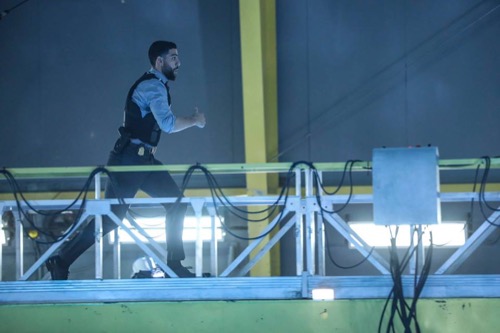 One of the themes underpinning “Doomsday” is the debate about whether revealing state secrets is just if those secrets reveal potentially dangerous or incriminating realities. Almost everyone who knows Jake believed he was doing the right thing and isn’t capable of an attack on his country, let alone the murder of his girlfriend. As always, Maggie and OA come down on opposing sides of the issue, at least for a while. Gradually, these two are becoming well-rounded characters; Maggie makes mention of a husband in “Doomsday”, and of “putting off” having children, one assumes for too long, while OA reveals that his background deep undercover is what has fostered his zero-tolerance attitude towards anyone who might have revealed America’s weaknesses to its enemies.

The plot of the episode thickens, but “Doomsday” is by far the most character-driven hour of FBI so far, and it really becomes a debate on legality vs. morality. Maggie’s aforementioned husband was an investigative journalist who wouldn’t be shooed away from the truth, which puts her perspective in direct opposition to OA’s. Of course, this largely being the Maggie Show, the twists and turns of the sabotage plot reinforce her point of view, and lead OA to question his. But this largely works from a character perspective, and helps to offset the faintly silly sting finale, which succumbs a little too much to cheap drama.

Still, FBI works so well as a procedural – and it undeniably does work – because of how it manages to at least raise these national debates and talking points. It would have been all too easy to cast MS-13 or ISIS as the villains in every episode, but with each, and with “Doomsday” in particular, Dick Wolf’s show is allowing his characters to have worthwhile conversations about national issues. The format might prevent any of these things from being explored in appropriate depth, but sometimes a simple acknowledgement that there are at least two sides to every story is worthwhile in itself.