I may like electronic or industrial music now, and I may have listened to little but Paul Simon as a kid, but the music of Queen joined the dots for me at every stage of growing up. They taught me about pushing boundaries and finding my place, about being myself and about connection with others. Queen kept me company when I was homesick, and Freddie… well, he was a model – if ever I needed one – that it doesn’t have to matter what others think.

So despite booking tickets for the opening night as soon as they were available, I was nervous going in to see Bohemian Rhapsody tonight: I was half expecting to be let down, expecting to see caricatures or a nearly-good tribute act. As it turned out, I hardly stopped grinning all the way through; well, except for a couple of scenes where I couldn’t help weeping, and one where I struggled to breathe.

Queen is in the blood of every Brit, whether they know it or not, whether they are fans or not: we can’t help but know the music, and many of us know (or think we know) the band. In all odds, most of us just know bits and pieces from gossip, newspapers or the occasional documentary. Bohemian Rhapsody does not present a new story, but it puts all the pieces together; largely with respect, and certainly with affection. It takes the history of Queen from the day Freddie Mercury introduced himself to them up to the day of Live Aid (their peak, some might say); it’s not the full story, by any means, but the main body of it, leaving an image which is worth remembering them – and him – by. 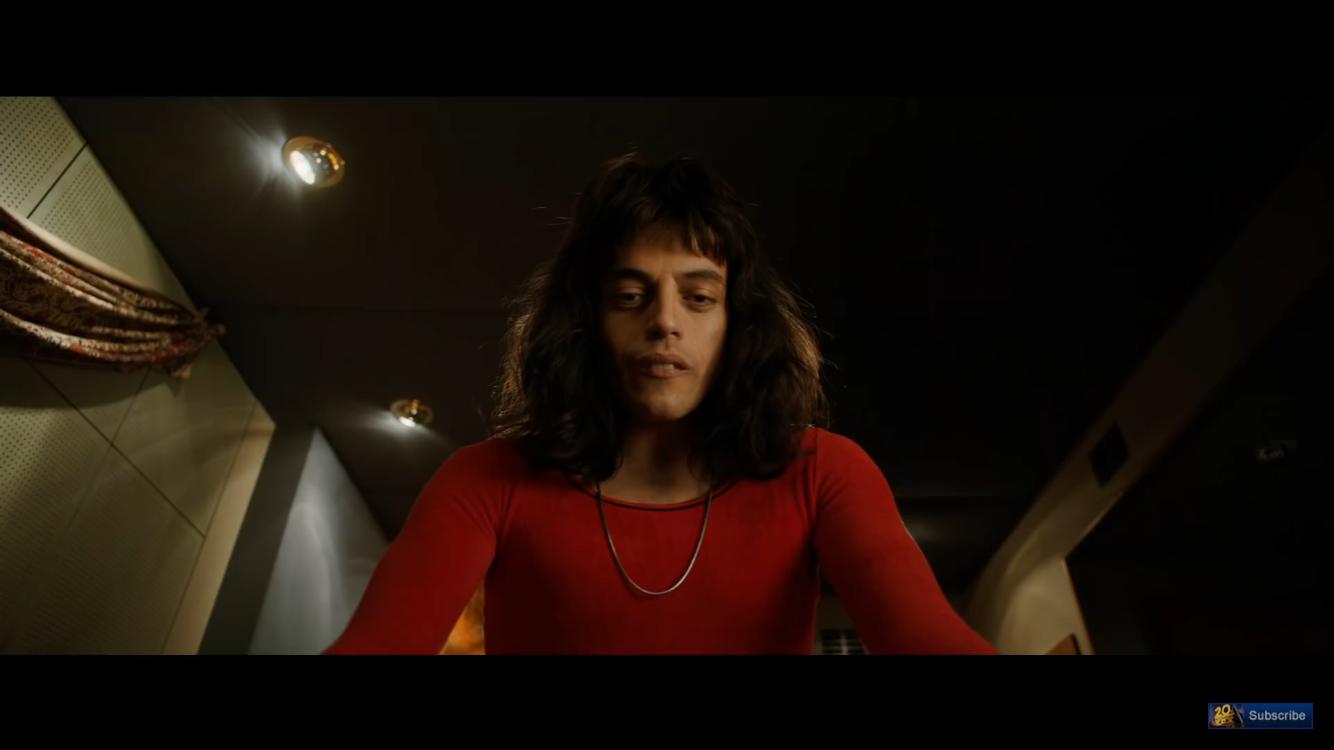 Here’s what fans will be asking about: Rami Malek plays Freddie Mercury extremely well. Extremely. He has the mannerisms, he has the expression, and he carries the look like a natural. I am not going to claim that Malek “channels” Mercury, or that he “becomes” him: he is a damn fine actor, playing a role; and he is well cast, for both his appearance, his skill and his background. I have admired Malek in all three seasons of Mr Robot, but not once did it feel like I was with Elliot Alderson; though for a few split seconds, his character from Buster’s Mal Heart bled through a little, when he spoke of loneliness and “in between moments”. Rami Malek is clearly one of those rare actors who does actually play a different character for each role, and I hope he gets awarded for this depiction.

The rest of the band members were cast equally well: Joseph Mazzello as John Deacon, Ben Hardy as Roger Taylor and especially (in my opinion) Gwilym Lee as Brian May. I wasn’t familiar with any of them as actors before, but they could have been twins to the band members at times. In the case of Hardy’s Roger Taylor, this was equally his appearance and manner; in the case of Lee’s May, his facial expressions were spot on. There was no problem at any time accepting these people as who they were representing; indeed the same can be said of minor parts such as Kenny Everett and Bob Geldoff.

We (my husband and I) couldn’t even see the join when it came to playing music and singing; whether Mazzello was actually playing the bass or not, it certainly looked like he was; and ditto Malek’s singing. A good deal of what we heard was Malek’s voice, but it blended with original Mercury very smoothly. My music producer hubby commented that the equipment and instruments shown were also authentic, especially in the scenes where “A Night at the Opera” was recorded (“wouldn’t surprise me if those were actually May’s”, he said). And not only did it look and sound like the band was really making that music, but it also looked like they were really putting themselves into it and having fun doing so; even when they were arguing.

The senses of time and place were definitely major successes in the production of Bohemian Rhapsody: costumes, cars, music, hair… pubs, even. We knew where we were straight away and at no time was the setting confusing; the story moved forward with natural progression through the years. The production, in general, was respectful to – nay, in worship to – the band: even the Twentieth Century Fox title jingle was rearranged to match Queen’s style; and some of the visual effects (announcing tour cities, for example) flirted with the period with style.

Sometimes, the cinematography was a little deceptive though: the introduction to Bohemian Rhapsody was a journey following Freddie Mercury to the start of Queen’s Live Aid set, peeping in close-up at details along the way, such as sunglasses, wheels on equipment cases and microphones. The directors (Bryan Singer and Dexter Fletcher) are telling us to expect details, intimacy, I thought. Intimacy was only hinted at though: we got to hear some of what was on Mercury’s mind, and saw his isolation; we saw nothing at all of the other members’ families or lives away from the band at all.

Actually, there was quite a bit of clever manipulation in the script, most notably in the presentation of Mercury’s family. At the start, his father was shown to be disappointed in Mercury’s lifestyle; then a hug on the day of Live Aid brought tears to my eyes, even though I could see what the writers were doing. Did they also apply that to Mercury’s own rise and fall? There are those who say his is a classic cautionary tale against the perils of hedonism – yes, really – and there are certainly moments when both Mercury’s friends and colleagues raise their eyebrows and warn him about his behaviour. But we will never know if the story here closely represents what actually happened: the man it focuses on can no longer give any response. Freddie Mercury died of AIDS, but that does not mean he brought it on himself.

The character of Freddie Mercury is a major feature of Bohemian Rhapsody: the film shows him to be shy at first while struggling to feel his way in life, and then over-compensate with dramatics. It shows him to need his friends (especially the “love of his life”, Mary, played by Lucy Boynton) and to fill his life with strangers when they deserted him. It also showed his coming out as bisexual to Mary and struggling to manage his sexuality, struggling to make it a natural part of his life. I’m sure all these things happened – they felt authentic, like nearly all the film – but to what degree? We’ll never know. I wish he was still around.

As a bisexual person myself, Freddie Mercury has always been a figurehead (Bi Visibility Day is held every year on his birthday for a good reason, after all), and I’m glad they were bold enough to use the word in Bohemian Rhapsody. However, his character in the film spoke it as if it were an easier, halfway statement to being gay, thus creating and diluting that representation all at once. The representation wasn’t great in terms of his ethnic background either: although Malek’s background is as close as one could probably get to Freddie Mercury (Parsi descent, from Zanzibar), the actors playing his parents are both from South-East Asia; a bit ironic when we hear he was (inaccurately) teased as “P**i” at times.

Of course, there was a great deal to the story of both Queen and Freddie Mercury which did not feature in the film: fifteen years or so cannot easily be condensed into just over two hours. Although we see some of Mercury’s solo career (and how it didn’t satisfy him), there is no mention of its successes. There is also no mention of soundtrack work, such as Flash Gordon, Metropolis and Highlander. Only a couple of albums are mentioned, and a couple of tours shown. But what they do show of the music and shows in Bohemian Rhapsody is fabulous and very well chosen: it starts with Doin’ Alright in a pub, we see them making A Night at the Opera, devising the audience participation aspect of We Will Rock You, and finally an abbreviated version of the Live Aid set, as well as a few other pieces along the way. I grinned and silently sang along all the way through, and – as I said earlier – whether it was Malek or Mercury singing, it made little difference to the enjoyment.

Overall, I have to say Bohemian Rhapsody is a must see… not just for music fans, but for film fans. It is beautifully made, and even if it had been fiction, I would have been sucked in by the drama; but it was (at least mostly) true. Do not go in expecting to see a perfect copy of Freddie Mercury and the others. Watch a concert or interview for that; this isn’t like Nick Cave’s 20,000 Days on Earth, where the camera followed him and his band for a period. This is a dramatisation of a major figure’s life, within the life of a major band: of course, there are some liberties with exactly what happened or when; and it is only natural that the band members who are still around had an influence. If you accept the film as what it is, you will enjoy the ride immensely.