The much-anticipated sequel to the 2014 found-footage hit, Stephen Cognetti takes another documentary crew back to the site of the tragedy, this time with a medium, and one team member from the first crew.

The much-anticipated sequel to the 2014 found-footage hit, Stephen Cognetti takes another documentary crew back to the site of the tragedy, this time with a medium, and one team member from the first crew.

When I discovered an interest in found footage films a year or so ago, rumour told me that Stephen Cognetti’s Hell House LLC was one film that I must watch. And I did; even placing it at number seven in my top ten. I had some issues with the writing, but it was well made and scary enough (those clowns!) that I didn’t regret watching it at all.

Hell House LLC II, though, was another matter.

I try to give a balanced view in every review, look at every angle – plot, themes, cast, characters, direction, production, music, etc. – but I’m afraid the resulting film is pretty unbalanced in this case… Let me see what I can do.

Like the first film, Hell House LLC II: The Abaddon Hotel is presented as a “found footage” film; or at least superficially. There is a caption on the screen which declares the footage to have been assembled by Russell Wyatt, and that views expressed do not represent Wyatt Associates. Hmm: so it’s essentially a mock documentary, and we now have a new name to contend with. The documentary on this occasion follows a new team visiting the hotel (the venue for the Hell House haunt attraction in the first film) to find out what happened several years earlier. That team includes an independent film crew, the editor from the first documentary team, and a popular medium with his techie.

But here’s my first problem: the assembled footage starts with the interview of a parent of a missing kid, then goes on to the TV panel show that the independent team watched when they decided to visit the hotel… and also includes a view of them discussing whether to go! Who filmed that? So, in a roundabout way, the plot involves Jessica Fox (Jillian Geurts) and her colleague Molly (Joy Shatz) contacting former editor Mitchell Cavanaugh (Vasile Flutur) and vain medium Brock Davies (Kyle Ingleman) about investigating the hotel (after having receiving an anonymous tip and watching the panel show), they go to the hotel, are very spooked, and not all of them emerge. 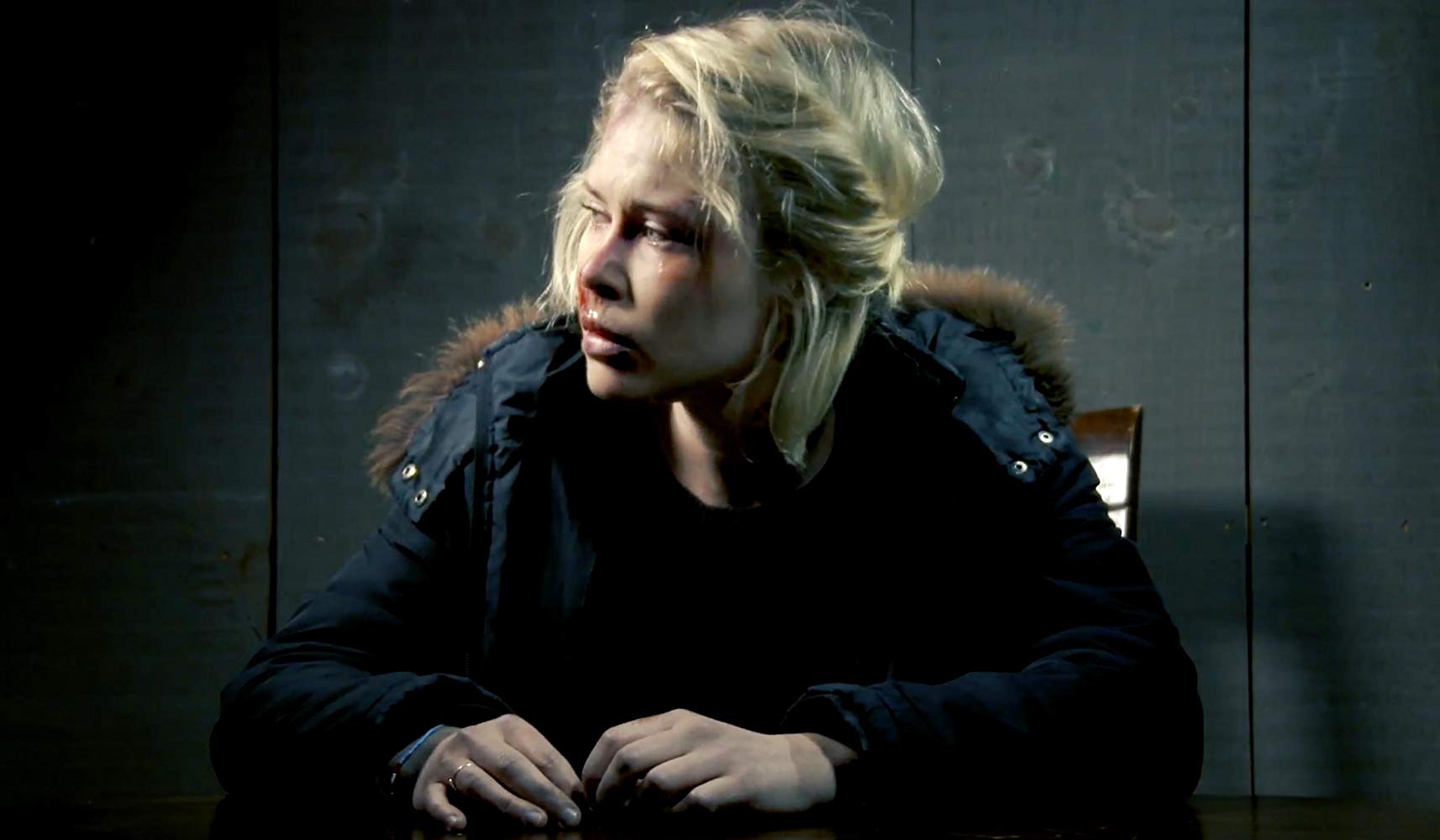 We know from very early on in this film who survives, as there is a police interview intercut with everything else, so little suspense there. The main body of the film is about what the team goes through at the Abaddon Hotel and how this person survives. But the answer to why she survived turns out to require a huge leap of faith and is frankly ludicrous. The supernatural “reveal” is presented in a very heavy-handed way, and extremely poorly acted. Really, found footage is one of those film styles that demands suspension of disbelief; and that is truly impossible if the acting is poor.

Talking of poor acting… Hell House LLC II‘s panel show scenes, hosted by Suzy McCombs (Amanda K. Morales) are interesting, and show how the incidents from the first film could have been interpreted by those who weren’t present (like the “true crime” reports in Dead Night, funnily enough); but they also highlight the very patchy quality of the cast. Suzy McCombs comes across as a bimbo anchorwoman, but it turns out she’s no different away from her desk. The medium Brock Davies is a shallow character, and the actor seems to be just reading lines throughout, rather than acting them. And as for the guy from the city council, Arnold Tasselman (Brian David Tracy)… he acts – if you can call it that – as though he’s stepped in at the last minute, into an unfamiliar script.

The acting is just as patchy once they get to the hotel, with hysterical Molly going over the top, and down-to-Earth David (Dustin Austen) being the most believable character – rational about his work, and keen to get some tacos – but unfortunately a very small role. The hotel (unsurprisingly) is where the best production is to be found, though; and this is where the two stars come from, rather than plot, acting, etc. The location is very well put together – I think I could find my way around if ever I went there – and the spooky props and effects as effective as they were before, especially when kept subtle. But there aren’t many of those subtle effects, and too many of the screams take place in the near dark, making it impossible to tell why they are screaming. 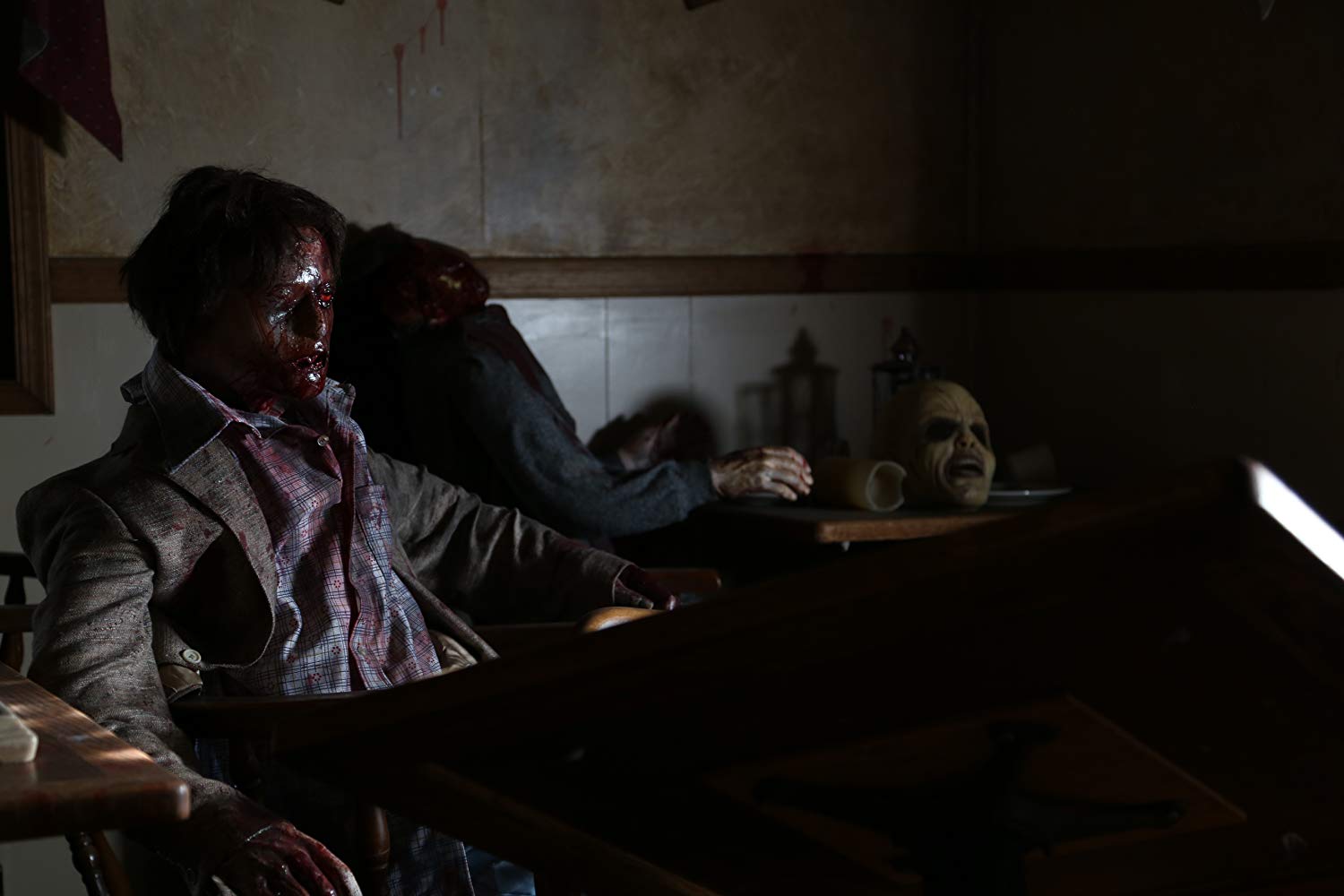 The original film had a dedicated fan base, some of whom subscribed to Shudder especially when they heard the sequel was about to land there. Many were disappointed. Personally, I feel a little conned that I sat through that only to find that there is no resolution to the story: we have to wait for the third film for that. Apparently, it will come next year, and focus on Russell Wyatt, who allegedly assembled this film’s footage. I’ll watch the third one, sure; but I’ve got little hope of a satisfying film after this one… fingers crossed Cognetti surprises me.

So my bottom line: if you’re a fan of Hell House LLC, don’t risk getting that good impression dulled… don’t watch this film. You don’t need the questions answering this badly.

THIS REVIEW IS PART OF OUR #31DAYSOFHORROR FEATURE WHICH IS RUNNING ALL THROUGHOUT OCTOBER. CHECK OUT THE OTHER ENTRIES.