The description for Edge of Fear looked intriguing and it was new on Netflix: I have now learned these alone aren’t good enough reasons to watch a film.

The description for Edge of Fear looked intriguing and it was new on Netflix: I have now learned these alone aren’t good enough reasons to watch a film.


Edge of Fear is the story of a man who fights back against a vicious gang who invades the home he’s visiting with his wife. Unfortunately, it’s like watching a cheap and dated TV movie. It is directed by Bobby Roth, who is mostly known from TV action shows and stars a number of names from Prison Break etc.

The gang in Edge of Fear have helped spring Novak (Robert Knepper) from a prison transport with the plan to deliver him to Mexico, but – wouldn’t you know it – their car fails, and they walk across hills and dales to a pretty cabin in the woods. There, they meet Mike Dwyer (Rockmond Dunbar) who has invited his doctor friend Patrick Chen (Shen Lin) and his wife Laura (Zhu Zhu) to stay for a couple of days hunting. It was never going to go well, especially with Robert Patrick leading the gang… but the Chens hold their own.

But honestly: Netflix’s own description tells you in advance that Patrick will be fighting back with a knife in his chest. If you want to see one or two people stand a chance against a gang of crooks with any suspension of disbelief, try You’re Next or No One Lives: in those, the hero’s ability to win made some sense. Still, there is a decent (albeit completely low brow) story here to watch when you don’t want to think too hard.

The only intellect you will need to apply is for a few subtitles. The Chen couple is apparently Chinese, though I don’t think there was any particular driver for that in the plot. (That said, at least the writers didn’t resort to a cliche such as Chinese hero must use martial arts.) 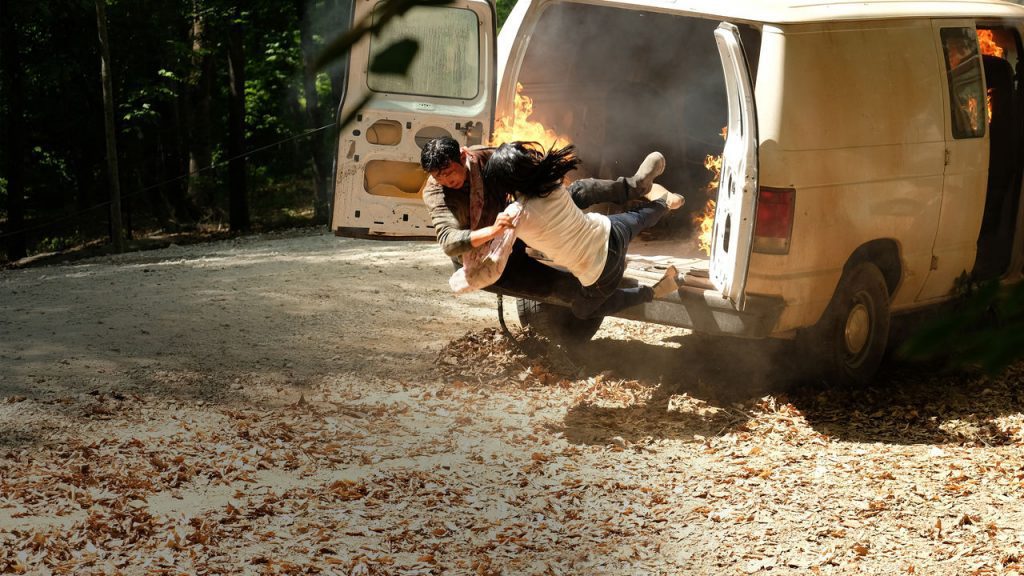 The acting in Edge of Fear is reasonable throughout, though I think I only saw fear itself shown once, briefly. Actually, what I mean is that the acting is reasonable considering how mediocre the dialogue was and how unbelievable some of the action was. The best actor was Robert Knepper, but that may just be because we don’t see enough of him to spoil the initial impression.

All that aside, Edge of Fear is actually an entertaining film. Because the action is largely unbelievable, that means there are plenty of surprises to be had. There’s a little sex, a little romance, obvious good guys and bad guys, plenty of violence and not much gore. Like I said earlier, a made-for-TV quality: sometimes that’s what you need to pass the time, but after that, it will probably be forgotten.