Million Dollar Baby boasts wonderful acting and character writing, but a frustrating treatment of themes within a plot adapted from two short stories.

Million Dollar Baby boasts wonderful acting and character writing, but a frustrating treatment of themes within a plot adapted from two short stories.

On the surface, Million Dollar Baby is a film about novice boxer Maggie Fitzgerald (Hilary Swank) and her progression as far as a life-changing title fight under the training of an old-fashioned manager Frankie Dunn (Clint Eastwood). It’s a rags-to-riches story, with a large chunk of relationship drama and a smaller – but no less significant – chunk of a cautionary tale. There are other themes and elements too, though; and they don’t all weave together well.

When I first started watching Million Dollar Baby and the main characters were introduced, I thought aha, if Gran Torino was Eastwood’s film about accepting people from other races, this is his gender equivalent: way to satisfy Hollywood commentators and awards panels. But Frank’s initial reluctance to train “girls” was glossed over once Maggie had persuaded him with her sheer persistence. I don’t know if the original story was about the gender gap in sports, or if the main character just happened to be female. The marketing for the film certainly led me to expect a film about “women in sports”; but perhaps that was the easiest of the many themes for them to portray.

Perhaps a film about women in sports should be made by a woman (e.g. Girlfight), or at least be full of women (e.g. Whip It). But this one isn’t even about Maggie, it’s more about the men surrounding her, especially her trainer, Frank. It’s not really about boxing either: the sport is the device used to tell the story of Frank’s search for redemption, and of the high and low tides of his relationship with Maggie. But when Million Dollar Baby does focus on Maggie’s character, it is about her determination, and about her finding something which she can love to pull herself out of an unsatisfying “trailer trash” life, not her gender at all.

The acting and character writing were both superb, though perhaps we’re all familiar enough with Hilary Swank and Clint Eastwood that we don’t expect anything else. Funny, I made a similar comment to someone about Widows earlier, too; but unlike Widows, Million Dollar Baby‘s minor characters, such as Maggie’s family, and the other boxers at the gym, were pretty much two dimensional. 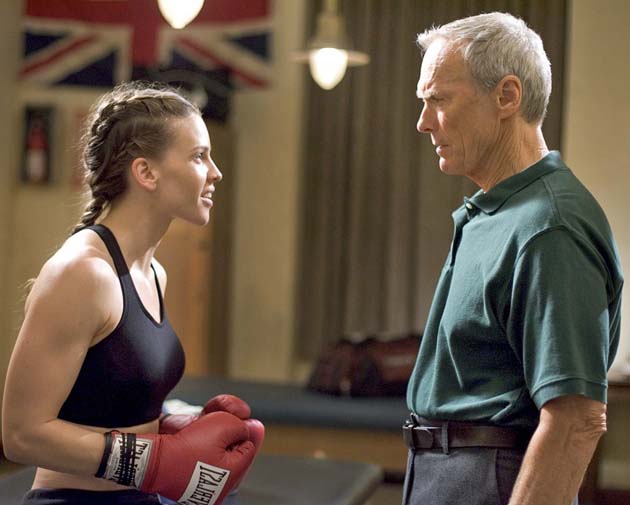 Morgan Freeman had a secondary role, as Eddie the ex-boxer partner in Frankie’s gym. He plays virtually the same personality as we’ve seen in nearly every other role of his. That in itself is fine (it ain’t broke, as they say)… but why did they have to give him a voiceover to read? The voiceover is extremely annoying: I nearly switched off the film fifteen minutes in. It gradually dwindled – fortunately – but came back right at the end to give a little bit more roundedness to Frankie’s backstory. But I really wish it wasn’t there at all, it grated on me very badly. What made it worse was the (excuse the mild spoiler) revelation that the voiceover was actually Eddie reading/writing a letter: the letter as context trope really should be left – in my opinion to when it is actually integral to the plot, such as Dangerous Liaisons; or as the electronic media was in Searching. It’s been done enough, and as an emotional drama, Million Dollar Baby could have been a better film without the letter trope and the voiceover.

Clint Eastwood’s direction keeps the story flowing together very well, so smoothly in fact that I can’t tell you why it works: it just does. The direction, combined with the writing, draws us in to Maggie and Frank’s lives. But I must warn you: if you watch Million Dollar Baby and feel yourself getting sucked in, it is only a film. You will hurt when these characters hurt. I was expecting a film about success from a poor start (like The Blind Side perhaps), and it took me as a viewer so far (and so naively) in that direction that I was angry when the tone of the film changed. I have very mixed feelings now about that change in tone. For one thing, along with the mixture of themes, it obscured what the film was trying to do, and the plot could have been more successful if it had been simpler; maybe that’s a risk in adapting two stories together. But on the other hand, when a film affects me emotionally, that shows it has a subtle quality, one I didn’t see coming.

The boxing itself is worth a mention, even though I said earlier Million Dollar Baby isn’t really about boxing (but what sports film is truly about its sport?). In terms of the duration, less than half the film must take place in a ring; so when the fighting does take place it is interesting to see how Maggie’s skill develops, and how Frankie’s advice varies as they get to know each other and as the competition changes. I took an unexpected interest in how the tactics of the game played out: I was never a fan of the Rocky films, but I don’t remember any of the fights from being particularly distinct from each other, and more entertaining than interesting. The fights in Million Dollar Baby were not about entertainment, but about personal satisfaction in the characters and dramatic development in the plot. They were shown to be made of both fitness and skill, not thuggishness. And when difficult consequences arise, they were not presented as a warning about boxing, but instead a warning that accidents and bad players can feature in any sport, any aspect of life. Frankie’s number one rule is wise: protect yourself.

Clint Eastwood clearly knows how to direct a film, not least from all those years on the far side of the camera. I won’t be watching Million Dollar Baby again but I’ll certainly watch other films with his name attached. And I might protect myself by keeping expectations in check.