Fast-paced, dark and fresh – Netflix series Hero Mask could well be the must-see anime of the year, introducing an intriguing plot shrouded with mystery and cool characters.

Fast-paced, dark and fresh – Netflix series Hero Mask could well be the must-see anime of the year, introducing an intriguing plot shrouded with mystery and cool characters.

Well, I have to say, I am pleasantly surprised. Netflix anime Hero Mask opens up cooly, like a James Bond movie, with a pulse-racing soundtrack to open up the title screens. The Japanese animation has a theme in mind, and that is a fresh, grisly action series that is difficult to put down. Netflix has played the right hand here with Studio Pierrot.

Induced in mystery, Hero Mask introduces the two leading protagonists supported by other characters that slide their way in to add depth to an intriguing story. I was surprised by how Hero Mask relies on the emotional angle to introduce a story about mysterious bio-masks that allow the user to change their face.

Detective James Blood (voiced by Yasuyuki Kase) is clearly a stubborn moving character. In the opening episode, he is tracking down a suspect and takes matters in his own hands despite going against the protocol of his agency SSC, irritating his boss Lennox Gallagher (voiced by Junpei Morita). The SSC has a clear admiration for him, despite the reluctance to remain under control.

Hero Mask also introduces you to Sarah Sinclair (voiced by Y?ko Kaida), a character who clearly has an urgency to investigate and dig deeper into the mystery of the bio-masks. She refuses to acknowledge orders to remove herself from the investigation, due to her own emotional tie-in to the entire scenario. 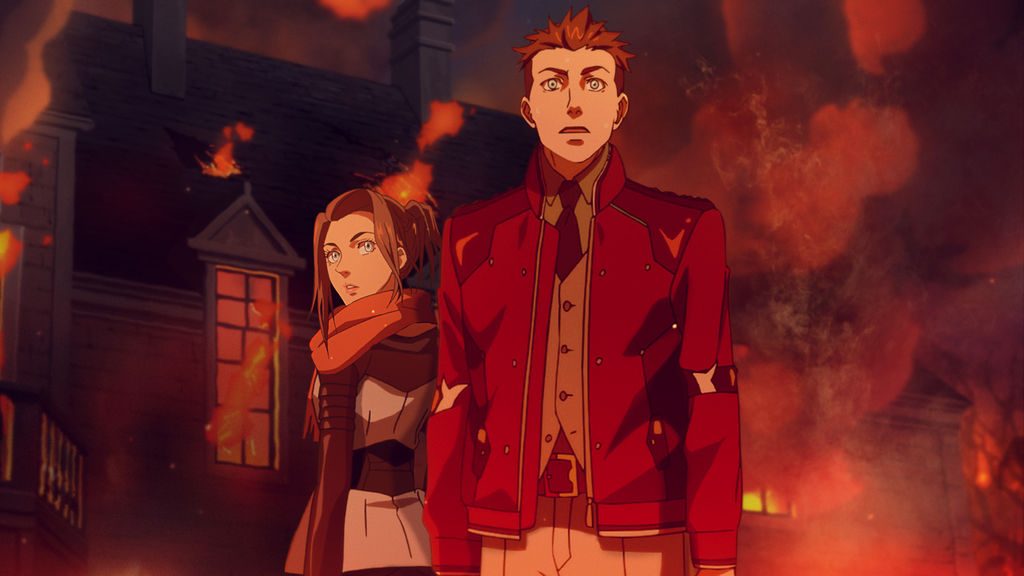 Hero Mask’s tie-in and what brings both characters together is the death of Monica, a colleague that conveniently suffers from heart failure after securing a key witness in an investigation. Sarah has many reasons to believe that the bio-mask and the death of her friend are linked. The tie-in is where the anime starts to play the violent aspects, introducing the first use of the bio-mask, used by an ex and presumed dead convict called Grimm, who causes havoc using his mask, determined to hurt James who initially arrested him.

Hero Mask is cool, it’s violent, and the mystery remains credible. I usually have an issue with some animations that fail to keep the story progressing at a pace that keeps me engaged, but Hero Mask’s primary tool is to keep the music moving, the scenes advancing and the characters adding to the thriller.

There is a scene in particular in the later episodes, which involves a car chase, and the anime convincingly pulls it off almost like a real-life representation of what a hunt would look like in a feature-length film. The style of the animation is sharp, stylish and ultra modern, which suits the action-led contemporary storyline.

As the series progresses, the truth behind the masks becomes clearer. I guarantee Hero Mask will be a binge watch rather than a tentative play. If there is one anime series that you watch on Netflix this year, then this is it.