There are moments in Chloe Zhao’s The Rider that is so beautifully shot that I have a feeling the character Ricky from American Beauty would wonder what the hell he was thinking when he filmed that plastic bag floating around in the wind. Her film is the very definition of poetry in motion.

Zhao’s film begins with a man named Brady Blackburn (Brady Trudeau), a young cowboy trying to get back into the rodeo circuit after suffering an accident that has him prone to seizures and loss of motor function in his right hand. His rodeo career appears to be over; he has a metal plate in his head but still struggles with giving up on his dream, even if he is told by his doctors one more fall could kill him.

The problem is Brady feels like life is breaking him in the same way he breaks in his horses, which leads him to the realization that there’s not much difference between him and the bucking broncos he rides. If they are both injured, they lose their purpose in life, and he might as well be put down like the rest. His father, Tim (Wayne Trudeau), wants him to quit, even if they are having trouble paying the rent and are on the verge of being evicted from their single-section mobile home. His sister Lilly (Lilly Trudeau) has autism, and his best friend Lane (Lane Scott) lives in a long-term care facility after suffering severe brain damage from a similar injury. He is a constant reminder of what could happen if he doesn’t give up on his dream, and dreams are what make life tolerable. 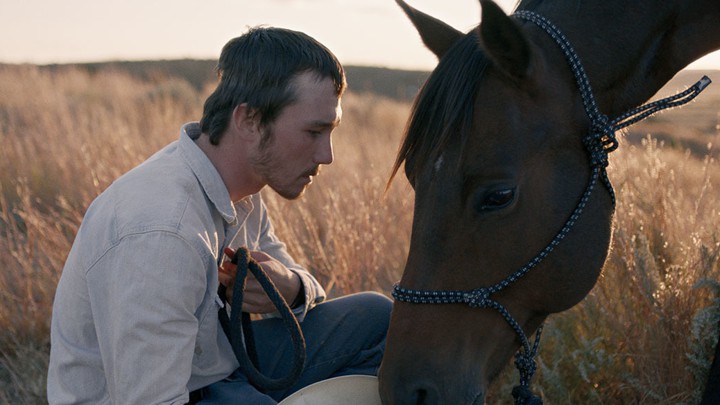 The film was shot in The Black Hills of South Dakota, and Zhao discovered most of her cast while shooting her first feature, Songs My Brother Taught Me. She reportedly met a group of men from the Pine Ridge Indian Reservation who were also cowboys; one of the men was Brady Trudeau, who was training horses, and years later, he was thrown from a horse which leads to his head being stomped (there is no other eloquent way to put it) on. Remarkably she fashions a story around Brady, his family, and his friend Lane a couple of years later, with stunning results. Zhao achieves a grounded modern western that is not contrived, never disingenuous, which is even more remarkable considering the roles are played by the untrained actors who have lived it.

The Rider premiered at Cannes Film Festival in 2017, and I saw it in April of this year when it was given a theatrical release. When I re-watched it, I was struck by how time away from it has only enriched my experience with it. Beautifully photographed, whose artistic choices and widescreen shots make for some of the most wondrous cinematography in recent films. There are such moving scenes, carry so much weight, and are so overcome by the sheer power of the reality behind them. They linger long after it’s over. Chloe Zhao’s choice of the final scene to close out her sophomore effort is nothing short of extraordinary. Her film is as a salt of the earth as it is poetry in motion. Let it sweep you away and take you for a ride.