The Rookie continues to be popcorn TV, but “The Ride Along” is enjoyable, which is all that matters in the circus-like cop drama.

The Rookie continues to be popcorn TV, but “The Ride Along” is enjoyable, which is all that matters in the circus-like cop drama.


This recap of The Rookie Season 1, Episode 7, “The Ride Along”, contains spoilers. You can check out our thoughts on the previous episode by clicking these words.

Okay, I give up. Despite its trashiness, I like The Rookie. Okay, the episodes are comically misdirected, the characters are unbelievably cartoonish in how they deal with life issues, and the way the police force operates is probably insulting. Although I wouldn’t know, I am not a cop. Episode 7, “The Ride Along”, lives on the edge of comedy, yet had a tragic outcome.

John Nolan (Nathan Fillion) is feeling sorry for himself yet again, unable to process his break-up with colleague Lucy (Melissa O’Neil). It’s almost pathetic if I am honest. In the opening of “The Ride Along”, the mid-life man kind of heavily moves himself about. What strikes me is he clearly feels inadequate due to the age gap, which is affecting him more, but his relationship was not that long at all, making his entire mourning ridiculous.

Despite the fact that his middle-class friend gives him a kick up the arse, he still looks depressed. That’s until the rookie is assigned to a VIP Ride Along with a film executive. Now, I am not sure if this happens in reality, but the concept of a Ride Along seems wild to me. The film executive is acutely aware that John and Talia Bishop (Afton Williamson) have been tasked to not allow him near a dangerous mission, but by luck, and privileged bribery, he gets his wish anyway.

“The Ride Along” is absurd, as they take a call from a family disturbance where one of their children is mentally compromised, unable to handle the fire alarm going off, and is wielding a knife and threatening everyone. 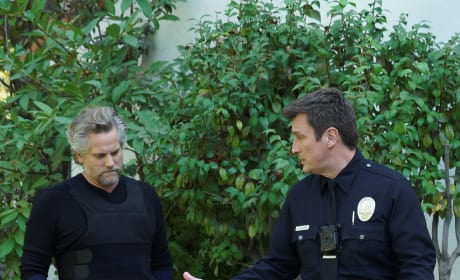 The film executive decides to thank John by giving him an insight into the police force by inviting him to a lavish house party, but the next day he decides to take matters in his own well-suited hands by offering money to the family to help out with mental health facility costs for their kid. This leads to the film executive getting attacked due to his misplaced kindness, and also taking a bullet, which he seems happy about.

Anyway, besides the madness, there is progress on Tim Bradford’s (Eric Winter) scenario with his estranged drug addict wife. In “The Ride Along”, she has been arrested for possession with the intention to provide sale of drugs. Tim is clearly emotionally torn and considers finding her extra stash of heroin so she can potentially be let off. However, Lucy gives Tim wise advice, explaining that corrupting the case against his wife will not fix her, and will harm him in the long run. Tim reluctantly decides to not help his wife.

As the episode concludes, John is clearly enthused by his brief socialising with the film executive and seems less grumpy. He decides to spend the night on a video call with his son. Meanwhile, Tim is in a depressed place, and a couple of the other training officers put their arm around him and suggest drinks. “The Ride Along” was a tale of opposite stories. It was bonkers. But like Taco Bell, sometimes cheap can be good, and it really depends what mood you are in. The Rookie returns next week for a mid-season finale I believe.