The adaptation of the last four titles in Lemony Snicket’s famous series of books is beautifully made and a satisfying conclusion, thanks to Daniel Handler and Barry Sonnenfeld.

The adaptation of the last four titles in Lemony Snicket’s famous series of books is beautifully made and a satisfying conclusion, thanks to Daniel Handler and Barry Sonnenfeld.

This review of A Series of Unfortunate Events Season 3 is spoiler-free. You can check out our thoughts on the previous season by clicking these words.

For any fans – of the books or TV show – I can now reassure you: Season three completes A Series of Unfortunate Events beautifully. Within fifteen minutes, I was laughing out loud; and for nearly the full duration of the seven episodes, I was either grinning with delight or gazing wide-eyed at the fabulous production.

Yes, seven episodes. “The Slippery Slope” (dir Jonathan Teplitzky), “The Grim Grotto” (dir Liza Johnson) and “The Penultimate Peril” (dir Barry Sonnenfeld) are all adapted into two episodes each, as per the first two seasons; and “The End” (dir No Welch) is adapted into one episode. That might seem odd, as the thirteenth book was easily as big as the twelfth, but trust me: nothing significant is lost at all. There are some changes in the content, moving from page to screen, but they are all applied with care and with affection towards the original tone and content. Not only that, but some changes were inevitable: the books were not initially planned as a set of thirteen; more depth was added as popularity led to the growth of the series, and some of the books (ducking now, in case of offending bigger fans than me) were not as well plotted as others. So the adaptation of the entire series of books into three fairly seamless seasons of Netflix TV provided an excellent opportunity to iron out wrinkles and improve continuity and consistency. That said, there are times when sticking to the quirks of the books’ inconsistency is worth keeping, for the sake of both plot and humour (Count Olaf declares, “this is no time for some late-series backstory!”) and they do it with style. Again, there is a joy to be had in spotting details from the books; and there are also plenty of details to be enjoyed that weren’t in the books.

I mentioned three fairly seamless seasons: the main cast have clearly not tired of their roles, but grown into them well as the characters have developed. The children have grown – fortunately – at about the same rate as the characters in the books. Malina Weissman is well into her teens and her Violet now gets the chance for a little love interest (treated with the same adorable discretion as the book). Louis Hynes’s Klaus still mumbles somewhat (and Hynes is probably the poorest of the three main young actors, but to be honest, I can imagine mumbling being part of Klaus’s genuine adolescence. The absolute stand-out star amongst the Baudelaire orphans is, of course, Sunny (Presley Smith): how she could have been so perfectly selected at such a young age (and for a three-year project), I don’t know; but Smith is developing into a true child actor, with her character being much more now than just a prop or a joke.

The cast in general grows in A Series of Unfortunate Events Season 3; adult and children, main characters, secondary and minor characters alike. Neil Patrick Harris’s Count Olaf is played just as flamboyantly as before, though, and we get to see a lot more of what is going on in his head as the story develops. Olaf seems to get more desperate as the story goes on, though: desperate to succeed, desperate to impress. The dynamic with those in his circle (which changes a lot in this season) is fascinating: we get to eavesdrop on loyalties and motivations being questioned, and a number of new connections between unexpected characters are formed… no wonder Olaf becomes a little unhooked from his moorings. 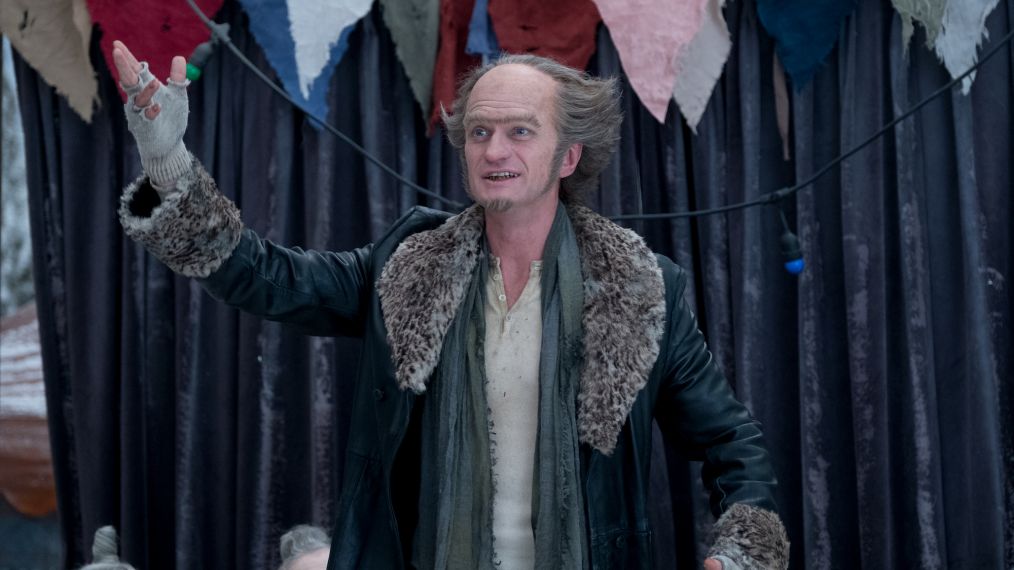 Season three has some marvellous minor/cameo roles again of course. Max Greenfield plays the manager(s) of the Denouement hotel (though I don’t recall him being quite so good-looking in the book). Peter MacNichol (who I first saw in Ally McBeal) plays a slightly suspicious hippy guru, and it is wonderful seeing him in something other than a suit for a change! That’s something this show has done for nearly every member of its cast: portrayed their characters against their usual type. Just wait until you see Richard E Grant in this new season: you will not recognise him! The minor characters are brought to life more vividly than in the books again, just as Jacques Snicket was in season two. Sometimes this is done by making alterations (to gender, age, etc.), but sometimes it is just a little extra depth or richness to the character writing. A beautiful relationship blooms which wasn’t in the book (or at least not developed so clearly), but I don’t mind: it is beautiful, and it aids in the development of both characters.

This part of the Series of Unfortunate Events shows the Baudelaires – especially the older two – becoming more mature; not just in age, but in recognising that the right decision to make isn’t always obvious. There is a delicious moral complexity (just complex enough to be suitable for adolescent minds) that threads throughout the stories in season three; starting with the orphans, though others pick up on it as well. It was there through the books, and translates very successfully to the screen. Honestly, if fans still had any concern about the success of the adaptation, I’m sure looking back on it at the end they will be satisfied. There are some who want every detail included in the adaptation, but I’m of the opinion that a precise adaptation may not have fitted quite so well in the television medium. Even the ending is faithful to the books, though a little ambiguity was removed: readers may have been comfortable with that in a way that television viewers may not; so again, I have no trouble accepting that decision.

I mentioned earlier the fabulous production in this series. As in seasons one and two, the sets and costumes alike are richly designed and sublimely realised. The story which stood out, for both sets and cinematography, was the Penultimate Peril (episodes five and six). Hotel Denouement would not have been out of place in a Wes Anderson film… though actually, this is the story directed by Barry Sonnenfeld, responsible for the Addams Family films. The opening of episode five had the most exquisite camera effects, setting the scene for tension and misdirection to come.

As Snicket declares in his introduction to episode one, this is the final season of A Series of Unfortunate Events. For me, personally, it is very satisfying to see a book or book series adapted to screen this faithfully, without the producers and writers tempted to extrapolate it into new directions (such as The Man in a High Castle), or rearrange the order of significant events to make it more dramatic and fit season lengths (such as American Gods). I have an inkling that the other series about Lemony Snicket could be dramatized; but if it isn’t, that would not impact this one: it is complete and comprehensive in its own right, and a bloody good job they did too.