Netflix original series Wolf serves a weak script in its six chapters, but it is propped up by an action-led plot.

Netflix original series Wolf serves a weak script in its six chapters, but it is propped up by an action-led plot.

I am confident that the international series’ are overtaking English and American releases on Netflix. This observation is hardly a negative; the streaming platform is doing a thorough job of releasing binge-worthy stories for the masses, and if you can pick between dubbed or subtitled then you have your weekend sorted. When I read the premise for Netflix original series Wolf, otherwise known as Börü, I was prepared for the ride; a story about a Turkish special operation unit that tackles the growing threat of terrorism in the country.

Unfortunately, I felt to a large extent let down by the Turkish series. Unlike the dark, shadowy world of Dogs of Berlin, Wolf lacks general substance. The opening episode opens up with narration explaining how sometimes monsters win, and I purposefully shackled myself to the sofa ready to be left breathless by some established plot involving terrorism.

Wolf concentrates exceptionally well on the action; giving obstacles and camera angles true to a video-game as the special ops team Börü have to overcome plenty of gunfire. Each episode is a different terrorist scenario, but in the first chapter, where the special ops team are dealing with a school hostage scenario, you fully understand what type of ride you are on. Wolf prides itself on its gunfights, its masculinity and the environment of war, but when it comes to the story and the characters, the Netflix series fails in its writing, which is extremely poor. 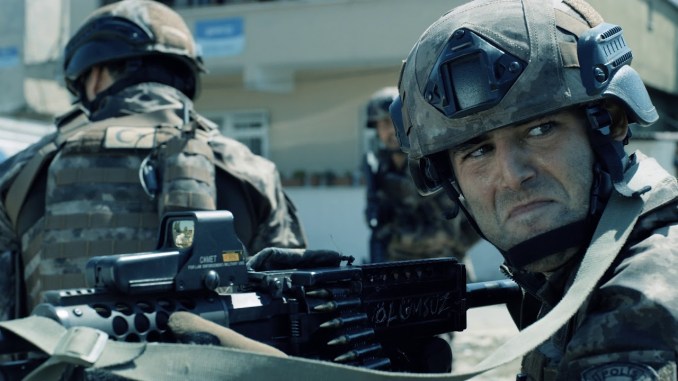 That’s not to say Alper Caglar‘s series is not worth the “Add to My List” option, because if you are ready to be immersed in good action sets, well played-out missions and the odd cheesy line, then Wolf should appease the masses. Its grittiness, excitement, and scene-setting provide enough entertainment to get through each hour-and-20-minute episode. As far as Netflix goes, Wolf lacks that temptation to binge – you could watch one episode and then leave the rest for a rainy day.

As a final point, I did decide to experiment with the dubbed and subtitled versions of the show to see if the dialogue was a different experience, but unfortunately, it’s just a weak script, giving insulting exposition, but propped up by a decent budget providing easy-on-the-eye theatrics. Wolf is at least worth a try.