While it’s puzzling that some are comparing the latest Neeson notch in the action bed-post filmography to Fargo, I admired how it showers the viewer with its cold/dark humor. Still, Cold Pursuit felt like it dragged on far too long to embrace its surface-level story and brutal style. Worth a rental.

While it’s puzzling that some are comparing the latest Neeson notch in the action bed-post filmography to Fargo, I admired how it showers the viewer with its cold/dark humor. Still, Cold Pursuit felt like it dragged on far too long to embrace its surface-level story and brutal style. Worth a rental.

Cold Pursuit is Liam Neeson’s latest notch in the old action bed-post filmography in a remake of a Norwegian film from director Hans Petter Moland (who is also at the helm of this American version). His film is admirable because it embraces its brutal dark humor into something unusual and different. Unfortunately, though, for every moment of dark comic goodness, you find yourself looking at unprecedented cartoonish-villain foolery from Tom Bateman.

Neeson plays Nels Coxman, a snow-plow driver who keeps the winding, ice- and snow-covered roads in the mountains near a ski-resort clear in the town of Kehoe, Colorado. Coxman is a quiet man who has little to say to his wife at home or when he hunts with his grown son. So much so, he hates the idea of giving a speech at the Kehoe Citizen of the Year Gala, being held in his honor (I mean, my Dad drove a snow-plow in Buffalo; you know, the city that INVENTED snow, but I don’t remember any awards on the mantle for that growing up).

Almost immediately, his son is kidnapped from his job at the airport, held against his will, shot up full of heroin for his troubles, and his dead body was left positioned sitting at an outdoor Denver-area establishment with a coffee in front of him. Nelson and Grace (practically a cameo by Lauren Dern) are told their son was a druggy, just another statistic on a long line of drug-related deaths in the city lately. Nels is distraught, goes to the office, and is ready to put a bullet in his mouth when he learns the truth behind his son’s death and sets out in pursuit of some cold, hard justice.

I like most about Cold Pursuit because of its incessant need to spin dark humor into every kill Coxman completes, on his way up the food chain, like some deranged Norwegian role-player video game. The film has a strong sense of timing and even pace, using the area’s natural backdrop as a character in the film all its own. Neeson is perfect in the brooding vengeful father role, saying more with his eyes than he does with his mouth. Any film with the foresight to cast William Forsythe as Nel’s brother gets a vote of confidence in my book, while Cardinal’s Tom Jackson is strong as the stoic White Bull, who can emphasize Nel’s plight.

The script uses actors Emma Rossum and John Doman playing off each other, and it is amusing how Rossum plays with a detective’s feelings to get ahead. Doman’s sensitivity objects to her cold heart. However, the best supporting turn goes to The Wire veteran Domenick Lombardozzi, Viking’s right-hand man and personal bodyguard, who gives a more particularly low-key performance than usual; his character stand out even more because of it. 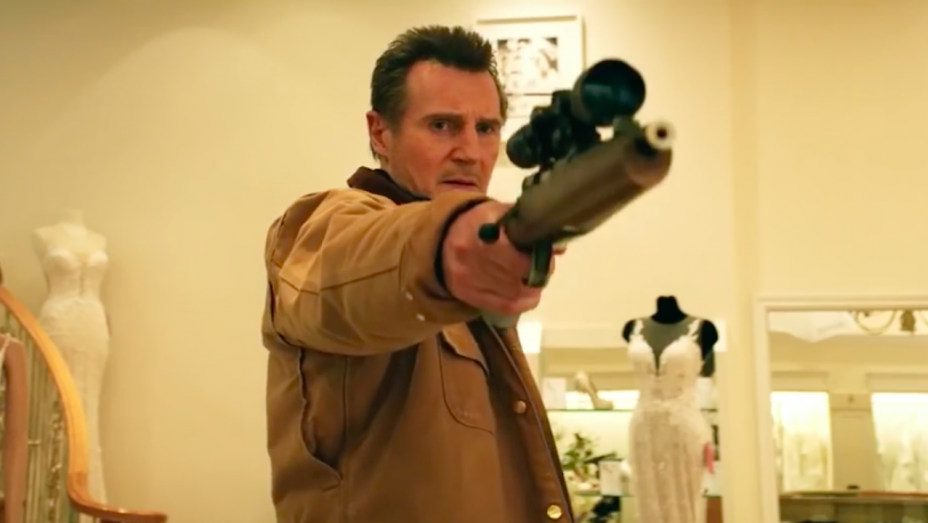 Where the picture falters a bit is on the shoulders of the wildly over-the-top performance by Tom Bateman (Murder on the Orient Express) as Viking and his criminal empire running around like a bunch of cocksmen swinging their dicks everywhere trying to take down anyone who gets in their way. Bateman’s performance may have been accelerated like gasoline on the fire by a script that has him saying lines about eating grapefruit and snorting three lines of coke is the breakfast of champions, to telling his elementary school son he is “not that smart.” He restricts his son to certain diets and even his choices in entertainment. If that wasn’t enough, he is bluntly racist to almost anyone he meets.

It is so excessive at times that an interaction with an African-American character, in particular, seemed so out of the left-field it seems obviously only put in there to let the viewer know this is a bad guy. You should know he is a villain (as if killing the Nel’s child, being a drug kingpin, and how he treats his own family wasn’t enough clues). Then there is the odd choice of accent, deeply monotone and villainous, so much so if you close your eyes, you might think Batman went off the deep end. Frankly, it’s so overtly out of place it almost changes the film conceptually.

Cold Pursuit’s streaks of brutal cold humor have more bite than your average dark-comedy that I have admired, though the film would have been better served better at a brisker 90-minute running time for a quicker pace to match its cold and calculated style. Unfortunately, you could easily think of a handful of scenes during the second half that could have been cut, causing the film to become more taxing than intended, which doesn’t help its surface-level plot lines.

The original (In Order of Disappearance) starring Stellan Skarsgard is on Netflix right now and is a better film if you want to save some coin. If you are a fan of Neeson and want to watch something a little different, spend your hard-earned money on it. No judgment here. Moland’s American reimagining, though, is only worth a rental for my buck.