The Politician Season 1, Episode 8, “Vienna”, the finale, is a creative, fun and well-told story to end an impressive Netflix series.

The Politician Season 1, Episode 8, “Vienna”, the finale, is a creative, fun and well-told story to end an impressive Netflix series.

This recap of Netflix Series The Politician Season 1 Episode 8, “Vienna” – The Finale, contains significant spoilers. You can read the recap of the previous episode by clicking these words.

Okay, so let’s re-run Payton’s (Ben Platt) situation in the finale of The Politician. Episode 8 moves forward three years; he’s in New York, singing and playing the piano intoxicated every night and his only saving grace is that Skye and Infinity visited him to see how he’s doing. Skye, fortunately, escaped jail, and Infinity made a successful book about her survival from Munchausen’s by proxy. But Payton is an alcoholic. His privileged life that tasted a heavy defeat crushed him.

But then Episode 8 smartly sidetracks; Senator Dede Standish gets to meet the Senator of Texas. The Texas man explains it is hard to get re-elected on liberal views, and he wants Dede to be her running mate for the Presidency. But before Dede accepts, the Senator of Texas wants to know if she is “squeaky clean”. Her Chief of Staff confirms there is nothing traceable or wrong on her. The truth is, she’s in a threeway marriage.

And that’s how McAfee joins the picture in Episode 8, “Vienna”. She joins Dede’s campaigns office and soon realizes that it isn’t a campaign office at all. All they do is post flyers every year (because they always win and there is no opposition) and they run their election data on Windows 98. When McAfee tries to speak to the Chief of Staff, she is heckled out of her office and told to do her job.

Anyway, back to Payton in Episode 8. His depression deepens when he receives an invitation to Alice’s wedding. One of his roommates tells him to sober up and go get her, and so he does. On his road trip, we learn he still talks to River within his conscience, giving him wise words on how he is feeling. Payton is not used to having so many feelings. 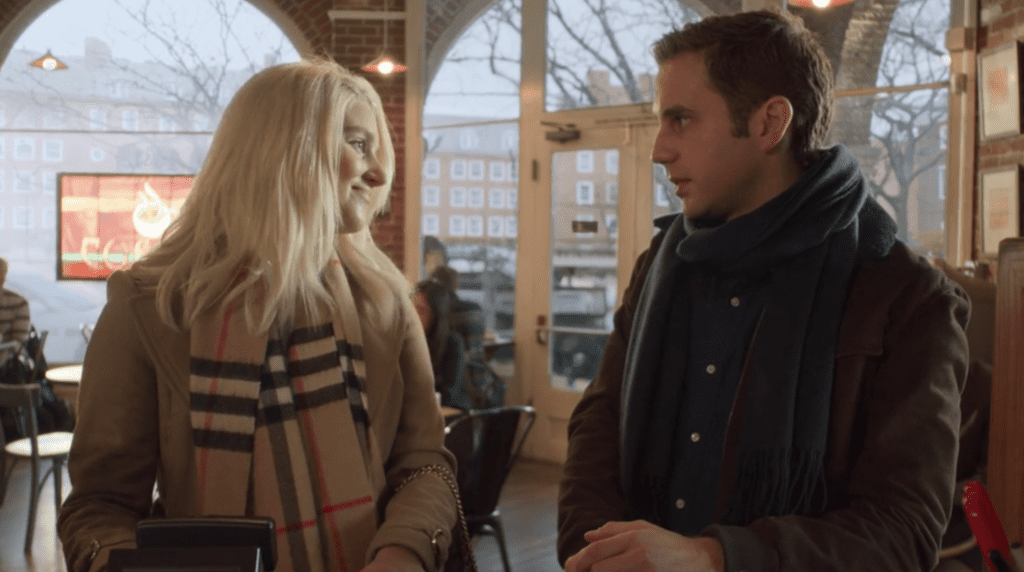 When Payton visits Alice in The Politician finale, he sees her partner too. He asks Alice not to marry Thad. Payton knows how much Alice loves him, but she returns some damning words: “You will never love me the way that Thad does”. Alice reminds him about the time that they agreed to do a pretend break-up and how he promised to look back in the corridor as a saving grace, but that he never did. As she walks out of the cafe they were in, she weeps, “maybe we can have an affair or something,” which was a well-delivered comedic moment.

“Down in the dumps” Payton returns to New York. James and McAfee have a political offering for Payton — to fight for State Senate due to the complacent Dede Standish. He rejects the offer. James and McAfee rally the troops — they call Skye, Astrid and Alice.

Alice, who is flagrantly attached to Payton, runs away from her wedding to go to New York City.

When Payton returns from a shift, the whole gang is in his apartment. Astrid emerges from the bathroom and states that she knows that Dede Standish is in a three-way marriage.

Payton is reborn — he will fight for State Senate.

The Politician Season 1, Episode 8, “Vienna”, was an unexpected, well-put-together chapter that was fun, and while I understand this is an anthology series, meaning the second season will be an entirely different story, I do hope Netflix consider continuing Payton’s political career. The last two chapters truly represented that there is nothing wrong with losing, and in fact, it can make you stronger for when you are ready to win.

You can read our season review by clicking these words