To the Stars (NewFest 2019) Review: A Beautiful Look Inside the Pains of High School in the 1960s

With a good-enough script and a beautiful piece of cinematography, this black-and-white film is a solid entry into the coming-of-age genre.

With a good-enough script and a beautiful piece of cinematography, this black-and-white film is a solid entry into the coming-of-age genre.


The last decade has provided us with some incredible black-and-white films, and you can be sure to add director Martha Stephens’ To the Stars to that list. This new coming-of-age drama first premiered at Sundance and has been running through the festival circuit, in competition for the Audience Award at this year’s NewFest.

To the Stars, written by Shannon Bradley-Colleary, follows Iris Deerborne (Kara Hayward) and her friendship with the new girl in town named Maggie Richmond (Liana Liberato). Iris and Maggie become fast friends, despite the fact that Iris is labeled as “social suicide” and an “untouchable” by the other, more popular girls at their small-town school in rural Oklahoma.

It doesn’t necessarily reinvent the wheel, but rather paints it in a new color. The themes, the conversations, and the characters are manufactured from previous high school films. There are some serious Mean Girls-esque conversations at the school dance, in the locker rooms, and at the lunch tables.

The two girls learn about each other, about the lies each of them has told, about Iris’ deteriorating confidence, and about the abuse that Maggie endures from the hands of her father, an absolutely stone-walled performance by the TV comedy stud Tony Hale. Maggie gives Iris a makeover in a classic nerdy-girl-becomes-beautiful montage, but it still feels sweet and genuine.

The LGBTQ elements of this film aren’t even realized until the latter half, when we see Maggie have a tender moment, followed by several more closed-door moments, with the town’s hairdresser Hazel Atkins (Adelaide Clemens). In comparison to the other films at NewFest, it could be argued that the lead of To the Stars is Iris, and Maggie’s sexuality subplot takes a major backseat. 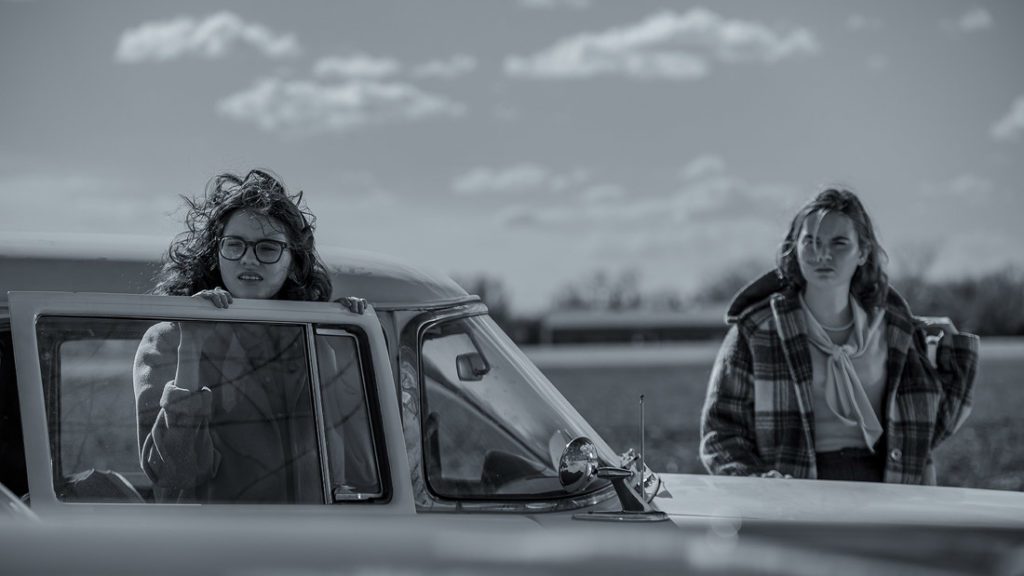 Stephens and Bradley-Colleary clearly do have lots to say about small-town ideas along with small-minded people, but they aren’t giving their characters enough time to toy with those concepts, and you end up wishing that Maggie or Hazel stood up to the traditional thoughts of middle Oklahoma.

Nothing in the film is shocking or unexpected, but the hatred towards the two women is palpable and frustrating to watch. Even the ending doesn’t come as a surprise, but these characters are given enough background for us to root for them, and be happy for them that things have turned out all right.

From a purely watchable standpoint, this movie checks all the boxes. It’s in black-and-white and shot with an eye for simple and natural beauty. The entire team behind the film does a fantastic job of creating the feel of the 1960s, as everything points to a specific period in time. The shots are stunning and you find yourself in awe of these indie filmmakers.

It must be mentioned that To the Stars features a rotating cast of formidable and respectable actors, all doing more than a fine job within the film. These actors include the aforementioned Hale (Veep and Arrested Development) as Maggie’s father, Jordana Spiro (Ozark) as Iris’ mother, Lucas Jade Zumann (20th Century Women) as Iris’ love interest, Shea Whigham (too many roles to recount) as Iris’ father, and Malin Akerman (Billions and Children’s Hospital) as Maggie’s mother. The acting overall is just superb, including the chemistry between the two lead girls.

To the Stars won’t make any waves as an instant classic, but it’s an enjoyable, well-acted, and certainly beautiful look inside the thoughts of middle America in the 1960s.