Just Mercy Review: A Moving Film of Integrity And Injustice

While succumbing to a small amount of melodrama, Just Mercy is ultimately a moving film about integrity, injustice, and the indictment of our criminal justice system.


Very early on in Just Mercy, you are doused in two engrossing and powerful scenes. The first is of our hero of this fact-based story, a lawyer named Bryan Stevenson (Michael B. Jordan), driving into a death row max facility in Montgomery, Alabama and seeing a dozen or so prisoners, all African-American, working in a field with guards surrounding them as they perform their manual labor. The other is a wholly demeaning visual of a prison guard making this young man strip naked as the day he was born before entering the facility to see his clients that has an uncommon power as the result of someone else’s pure ignorance.

Just Mercy chronicles the beginning of real-life and civil rights legend Bryan Stevenson’s career while starting at the Equal Justice Initiative (EJI) in Montgomery, Alabama after his graduation from Harvard Law. In his first case, and with the help of a local advocate Eva Ansley (Brie Larson), they take on the conviction of Walter McMillian (Jamie Foxx) for the murder of 18-year-old Ronda Morrison. The case wasn’t a solid one — in fact, there were more cracks in the case than a floor in a condemned home. With a lion’s share of evidence proving his innocence, he was sentenced to life in prison without parole, put on death row, and no one was willing to take on the politics of overturning an infamous murder; until, of course, Stevenson arrives in town defending about a half-dozen men facing capital punishment charges.

Just Mercy was directed by the man responsible for Short Term 12, Destin Daniel Cretton, and co-wrote this adaptation with scribe Andrew Lanham (The Kid); their most recent collaboration was the ill-reviewed Larson vehicle, The Glass Castle. Their new film is an improvement in almost every way, basing their screenplay on Stevenson’s memoir. It’s raw, fairly straightforward without a big musical score to enhance any significant turns in the narrative. It smartly relies on the natural power and suspense of the drama that’s legally based on a true story of a wrongful conviction.

While I enjoyed its grounded approach, I would have liked a tighter script that dealt with more clarification on why such evidence was not presented and ignored. For instance, why a tape of the main witness swearing MacMillian didn’t do it and only changed it when he was threatened with a death row charge; though, it’s obvious if you connect the dots between politics, racism, and legalized laws that practically scream Jim Crow. A more nuanced approach addressing each legal strategy that was denied would have lent more suspense and a deeper connection with the fight to set McMillian free. The script also gives way to a small amount of melodrama that wasn’t there previously by film’s end. 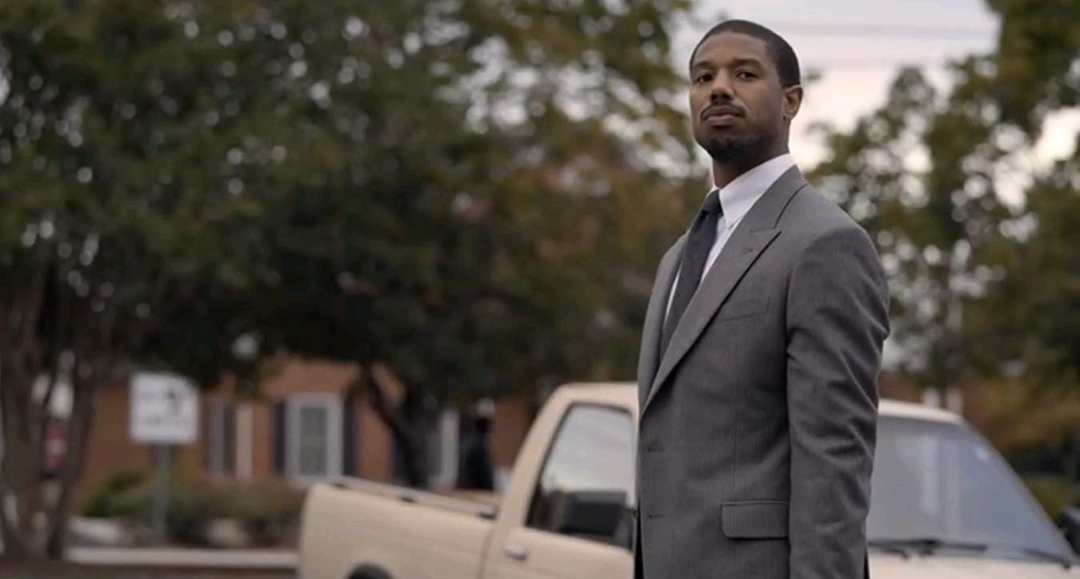 You don’t pay theatre ticket prices to watch a courtroom film to quibble over details, but for the sheer nature of its storyline and the showpiece it offers for its talented cast. This might be Jamie Foxx’s best role in years, and he commands your attention to the camera in the limited screen time he has in every frame. It’s a nice reminder of what a talented actor he has been after his string of big-budget flops.

The casting of Brie Larson brought an interesting quandary for me as here is a person who reportedly had a larger hand in the development of EJI and the cases that were displayed in the film. On the one hand, her association with the director and star power is welcomed in the film, and the studio could have demanded an expanded role that would have made the film’s script disjointed or uneven. Although, underwriting her role in the story is disingenuous and undervalues a woman’s role in a real case, which is a shamefully common practice in most Hollywood scripts.

Michael B. Jordan does what the role asks of him; he’s slightly naive, young, idealistic, polite, yet grounded, and stoic. You can see parallels to the strength he brings that’s similar to the film’s setting of To Kill A Mockingbird and the protagonist Atticus Finch. He shines as a real-life hero of great poise and conviction. It’s very hard to portray integrity without succumbing to a grand, divine plea before the court; I think he would have made Harper Lee proud of his interpretation of a real-life Finch, and I’m sure Stevenson does as well.

Just Mercy is well worth your time and money based on its raw power and stirring performances from its top-notch cast that doesn’t even address the standout supporting turns from Tim Blake Nelson, Oshea Jackson Jr, and a deeply felt Rob Morgan (Mudbound) as a death row inmate Herbert Richardson. Ultimately, it’s a moving film about integrity, injustice, and the indictment of the criminal justice system against the nation’s poor and its minorities.