All the characters seem to be putting plans in motion in Better Call Saul Season 5, Episode 4, “Namaste” in another brilliant chapter.

All the characters seem to be putting plans in motion in Better Call Saul Season 5, Episode 4, “Namaste” in another brilliant chapter.


This recap of Better Call Saul Season 5, Episode 4, “Namaste” contains spoilers and information of how it ended.

It opens up with Saul browsing an antique store — determining what is heavy and what is not. He buys three old bowling balls and asks if he can have three for $75. This obviously becomes important later.

After their intense drinking session from the previous episode, Saul and Kim wake up hungover from the night before and brush their teeth together. When they leave the house, Saul tells Kim he will be doing lunch with Howard. Kim explains she will be fixing the issues surrounding Mesa Verde.

Saul meets two of his clients in prison and gives them a break down of how he can reduce their sentence, which includes rehab. Saul reckons he can get them 12 months in prison (down from 5 years), and it could go down to 6 months with good behaviour and the prison overcrowding. Four grand is the fee, and both prisoners complain at the cost, referencing the 50% offer. Both clients say they will get a “free lawyer”. Saul puts on his usual act, gets passionate about his fee and states how he is one of the best lawyers. He pretends to walk out and his clients predictably do a U-turn and ask him to stay to agree on the deal.

Saul is best when he does this.

At the midway point, Saul meets Howard who wants to know who Saul Goodman is. Saul gives a good byline — “Saul Goodman is the last line of defence for the little guy”. Howard markedly asks if Jimmy McGill could have done the same thing and then admits that his firm tainted him and that they should have hired Jimmy. Howard wants to offer Saul a job. Saul questions the offer, especially with the past between them. Howard asks Saulo to think about it, and as he drives off, Saul notices his license plate says “Namaste”. 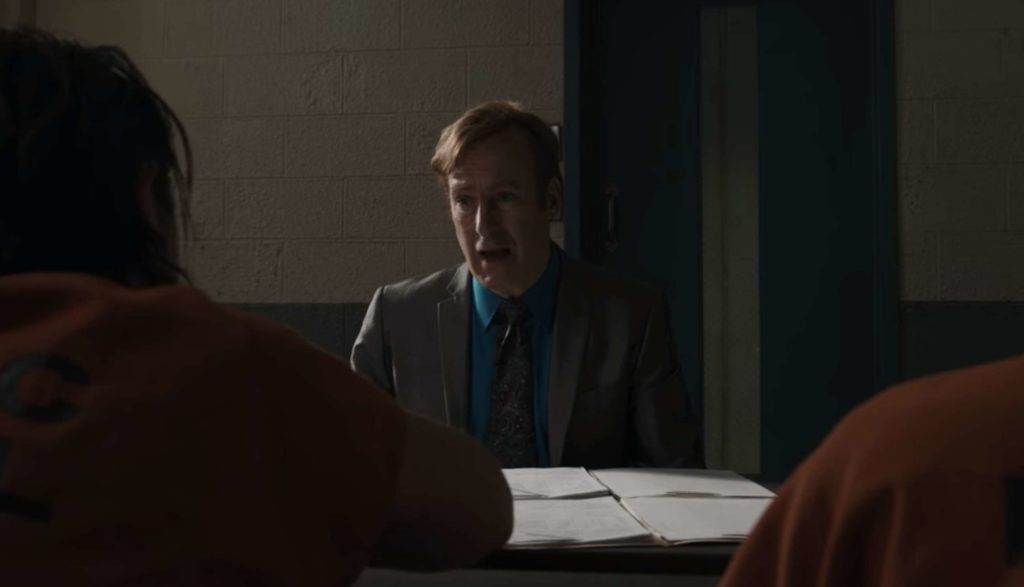 Kim is still fretting over the Mesa Verde scenario in “Namaste”; in a meeting, she provides a proposal and suggests moving the location of the call centre. She tries to sell it for an excellent investment. Kim tries stating there is a reputational risk of Lot 1102 with Everett Hackett. Kevin disagrees, saying the land is the company’s and he wants to proceed with the current plans.

Kim is struggling with her moral compass.

And she decides to watch Saul in court as he proves to the judge that the main witness falsely identified his client. Kim waits for Saul and he is happy as the case against his client is dropped due to “mistrial”. Kim looks on the edge and wants to discuss her Mesa Verde case with him.

Anyway, looks like Hank is part of the furniture now for Better Call Saul — he and his colleague are doing a late-night stakeout on this money drop from the info they received in the last episode. They start taking photos of the man doing the drop-off. Meanwhile, Gus tensely waits for a phone call. The man sees Hank and his colleague and speeds off in his car. Hank and his colleague lose the man but they get the cash and arrest three men. Gus receives an update regarding the money.

As stated in the last episode, Gus had no option to allow his money to be found or it would have given away his spy.

As we near the end, Saul heads to Everett Hackett’s house and says he wants to be his lawyer. Saul has a proposal and says he hates Mesa Verde and wants to stick it to them. Saul secures Everett as a client and updates Kim.

Kim is suddenly happy to work with Saul again with these scenarios.

Afterwards, Saul heads to a house and starts throwing the bowling balls over the gate and hitting a car — it’s Howard’s estate.

Better Call Saul Season 5, Episode 4, “Namaste” closes with Mike walking home drunk again and the same men try to confront him. This time they all beat him up and one of them stabs him. Mike wakes up, laid in a bed, his wound patched up, in the middle of nowhere.