The making of the biggest selling gospel album ever, reconstructed into an 89-minute film many years later. A great listen, a fascinating watch, though not entirely successful.

The making of the biggest selling gospel album ever, reconstructed into an 89-minute film many years later. A great listen, a fascinating watch, though not entirely successful.


Amazing Grace is the film of Aretha Franklin recording her landmark gospel album in Los Angeles in 1972. That’s it in simple terms, but that’s actually too simplistic; the history and production of Amazing Grace are complex and layered.

Franklin was already famous in 1972 for soul and R&B music and determined to take a musical side-step back to her gospel roots for her next project. The recording of this album took place not only in a church (the New Bethel Baptist Church, Los Angeles), but with a well-known choir (the Southern California Community Choir) supporting her, with Rev James Cleveland as MC, and all performed in front of a church congregation. Whether this is self-indulgent on Franklin’s part, commitment to her musical genre or scene-setting with a cherry on top, it all adds to the gospel atmosphere for the performance. The songs are traditional American Christian tunes (albeit from various eras), given added power by the Queen of Soul’s voice; and her faith – as well as those of the people around her – is clear to both see and hear, giving a degree of weight to the songs’ meaning.

Sydney Pollack was hired to direct the recording of the album, Amazing Grace; but due to a combination of his inexperience with music films and issues with the technology used, the film was not finished at that time. I won’t go into what the problems were (there are plenty of other articles out there should you be interested), but the outcome was that about twenty hours of 16mm footage was put away for about twenty years, along with the audio to match (but which could not be synced to the film in production). The resultant jigsaw puzzle was picked up years later when technology made it possible, though there were legal issues with Franklin and her family to resolve too before it could progress far. The final film was edited by Jeff Buchanan and directed by Alan Elliott: both deserve equal credit in my opinion. Neither is perfect, but it’s close to miraculous that they were able to complete a project started decades earlier.

Enough about the history: I want to tell you how I feel about Amazing Grace. The background is important though; the film is a result of two principal teams in very separate eras, and the issues in the film can be explained by that history and informs my opinion too. 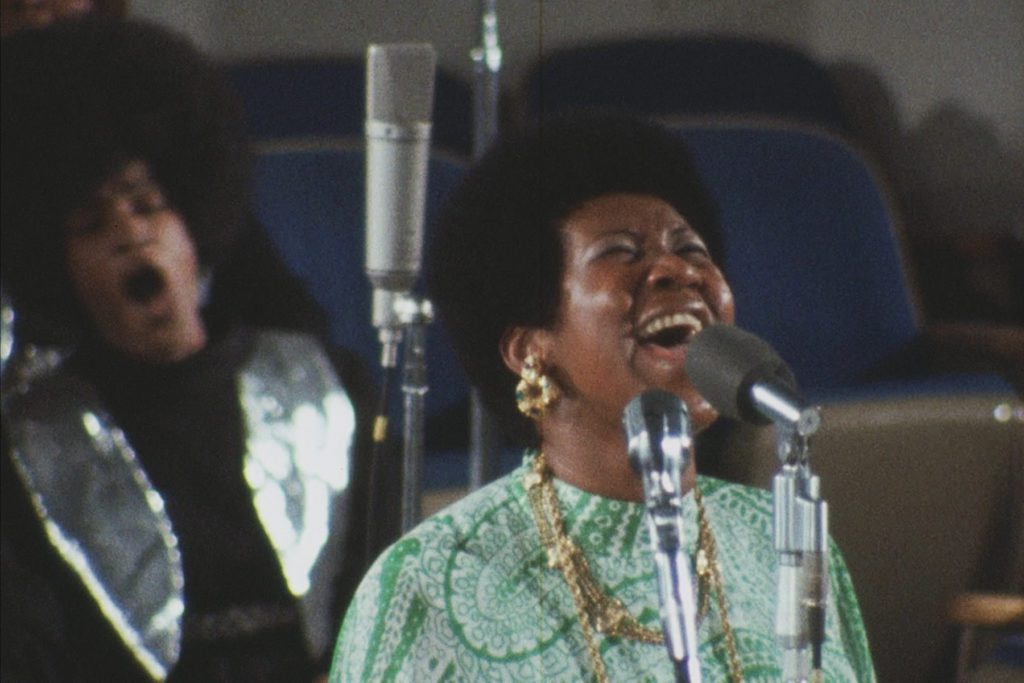 I’ve called Amazing Grace a jigsaw puzzle, and for the most part, it’s put together very well, with hardly any joins showing at all. There is a break halfway through, announcing “the second night” of filming; and the film opens with introductory captions giving a little context to the artist herself and the event. So we are not simply watching and hearing Aretha Franklin and choir sing what became the Amazing Grace album: we are seeing the birth of that album, watching it come to life. Consequently, it is a little disjointed: if I closed my eyes simply to enjoy the music, I would open them now and then, wondering what was going on. The oddest, most disjointed moments are two instances of split-screen which occur during the second half. Just two, no explanation or benefit to them.

Apart from those split-screen moments, Amazing Grace allows us to observe the event with a mixture of admiration and intimacy. The camera lingers on shoes, faces, instruments; then pulls back to the whole crowd at times, the room, the equipment, the choir getting carried away. The intimacy is not warm, though: it’s the sort you find in a doctor’s surgery. I felt like a gatecrasher at times, like I didn’t belong there. Granted, I have no faith myself anymore, and neither do I share any cultural background with Aretha Franklin, Clara Ward (who also appears at one point) or most of the other myriad faces on the screen; but it’s probably worth noting that Pollack, Buchanan, and Elliott are all looking at the gospel event from outside its usual culture base too. Perhaps it’s the influence of the 1970s team, but it often has the feel of an anthropology piece in which a visitor is invited to observe a cultural ritual or custom, rather than share it.

Amazing Grace isn’t a vehicle for an artist to show off, like Madonna’s Truth or Dare: Franklin hardly speaks or looks at the camera, putting all her energy into the music and its recording. The film has been described as a documentary by some and a concert film by others, but it’s not strictly either: there is no narrative or examination of what is happening beyond what the Reverend tells the congregation. Rather it is a snapshot of a moment in an artist’s career, somewhat like Stop Making Sense or Rattle and Hum. It’s strange that we see it so many years later though, as though the remarkable voice and “concert” were sealed in a time capsule until another century had arrived.

So it’s a fascinating film to watch, both in its own right and with the knowledge of its problematic birth and delayed delivery. Enjoyable? Well yes, and it’s great to see the formidable woman behind the powerful voice, giving it everything. But in my opinion, the music did not need or benefit from the addition of this lost-and-found footage: the film makes the music somehow smaller, undeservedly.