With production green-lit, Hollywood season 1, episode 5, “Jump” deals with the complications of running a “controversial” picture.

With production green-lit, Hollywood season 1, episode 5, “Jump” deals with the complications of running a “controversial” picture.

At first, Avis makes a decision — she will not be casting Camille and she does not want to be the first woman in history to bankrupt the studio.

Richard Samuels passionately asks her what are her personal risks — she’s fine financially regardless.

And then Ellen chips in, stating that Avis can look back at her life and know she made the right decision. Avis changes her mind, Ace Studios are casting Camille and making Meg.

In a somewhat touching and also surprising scene, Claire tells her mother that she’s made the right decision and that she is proud of her. Avis tells Claire that she’s cast in the picture as Meg’s best friend.

What does this mean for the studio?

Richard tells the board that Meg will take a financial risk so they need to stay “on a budget” with some theatres pulling the plug.

Later on, Richard is annoyed at the budget increasing, asking the production crew to reduce hairstylists, etc.

Does Rock get a part?

Indeed he does — four lines. He is really happy about at least getting a role but Henry brings him down to earth saying he shouldn’t be happy and that his teeth are crooked. Henry takes Rock to the dentist.

Richard also wants to amend parts of the script.

His main issue is the film’s main message — a “colored girl” who fought for a career and then ended it all; a young black girl watching this film will think that giving up is fine.

Archie is persuaded to the realization that Meg needs to climb down from the Hollywood sign rather than killing herself — it would make a better movie.

This scene is representative of the times; they realized that when the film presented a white female lead, the suicide scene made sense, as white women are always cast in films. But a black woman killing herself in this particular story for the studio’s first black lead would have the wrong ramifications culturally. 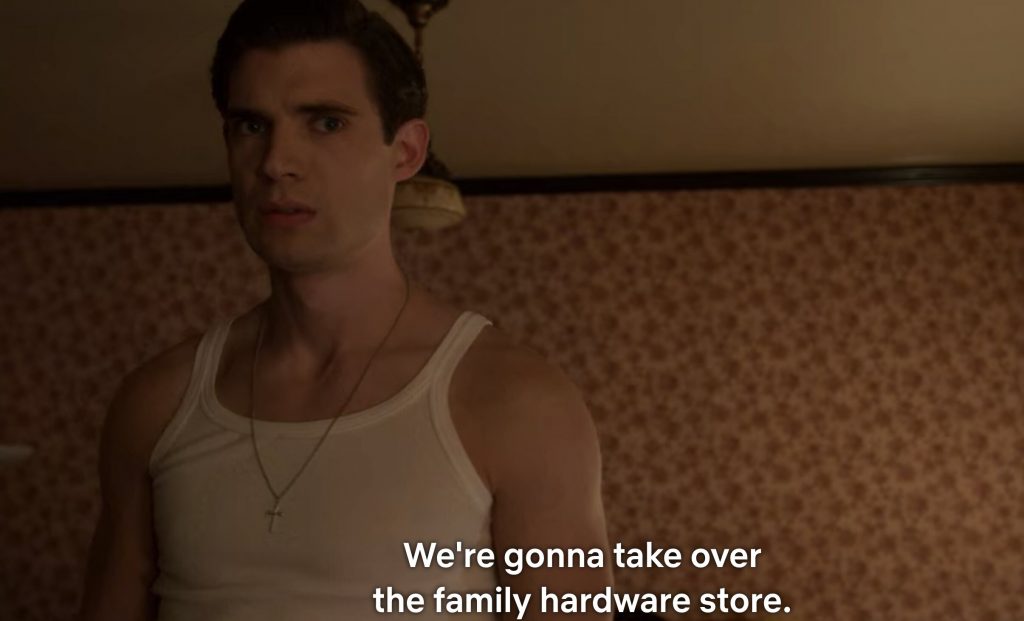 Jack is in hot water.

Avis, Ellen, and Richard tell Jack that a story will be leaked to the papers about being caught by the police for solicitation.

Henry is called in to save the day, recruiting the mafia to physically hurt the reporter who is about to release the paper. The story is killing; Jack’s crime and Avis using the gas station services.

But Henry does nothing for free…

No, in return he wants to be the producer of Meg and his name above Richard in the credits — Avis agrees.

How is Raymond doing with the budget in “Jump”?

Not well. He has a problem with the Hollywood sign as without scaffolding, they cannot shoot the camera at Camille climbing it. He asks the production crew to alter it.

When Richard learns of this he publically fumes at Raymond and tells him he can pay for the additional budget to pay for the sign. Archie tells Jack and Raymond they need to return to the gas station to recoup the costs.

And Ellen has a “thing” for Richard?

As we approach the end, Ellen makes a move on Richard but is rejected. She raises how they are both best friends and single. Ellen also implies that if Richard is gay, she doesn’t care.

Richard explains that he cannot be with anyone and assures an emotional Ellen that their friendship is not ruined due to this conversation. Richard leaves her house, sobs, and then drowns his sorrows at a bar.

It’s sad to see Richard so conflicted at such an old age about his sexuality.

Jack is concerned that his wife is too friendly with her ex-colleague at the cafe. He asks her about him and she spills the beans; that Jack makes her feel lonely and Erwin makes her feel loved and they’ve grown close. She also drops the clanger that the twin babies are Erwin’s and she is going to leave him to pursue her dream and run a hardware store with him.

Jack is noticeably shocked and heads to Archie’s house and asks if he can sleep on the couch.