13 Reasons Why season 4, episode 8, “Acceptance/Rejection” is ironically and thematically relevant to the protests happening in America right now in a timely chapter with plenty of social commentaries.

13 Reasons Why season 4, episode 8, “Acceptance/Rejection” is ironically and thematically relevant to the protests happening in America right now in a timely chapter with plenty of social commentaries.

How does 13 Reasons Why season 4, episode 8, “Acceptance/Rejection ” open?

Episode 8 begins with Clay narrating about a distant dystopian future and the earth is under attack from an alien army. Bryce (who is a sentient robot) tells Clay that they should fall back, retreat and fight another day — apparently Bryce has a flaw; he has a conscience. They continue to throw their friends into battle and watch them die. Clay wakes up and narrates he’s had a different version of that dream for days. 13 Reasons Why season 4, episode 8, “Acceptance/Rejection” draws metaphorical comparisons to a dystopian future, which is a little crazy.

Diaz asks Tony and Clay why they believed Tyler was buying illegal guns; they find out that Tyler was an informant. Standall says that the entire community is safer because of Tyler’s sacrifice.

Alex’s family celebrates as Alex gets into his college. Alex is worried about the family and finances. When Justin and Clay wake up there’s a letter for Justin; he got into his college. Their parents mention Gordon Lightfoot and it freaks them both out how they know that name. Clay narrates how bad sh*t is about to happen. Meanwhile, Winston tells Estelle and Diego that Jessica sent Justin to kill Bryce but both are not convinced by the theory.

Diego confronts Jessica about how she is blowing him off; Jessica tells him that Justin’s mother died and she’s trying to be supportive. Diego tells Jessica that Winston believes she has been blowing him off due to getting too close to the truth about Bryce. Meanwhile, Tyler is out of school and reminds Tony and Clay about having faith in their friends. The strange thing is that 13 Reasons Why season 4 has had the least problems with Tyler; it’s the other characters failing to keep their heads together.

Tony thinks he is Rocky Balboa

Tony wants to continue to fight but his boyfriend raises concerns — he feels like he only has fighting left. In his next fight, Tony is dropped instantly. Tony gets up and knocks his opponent down — another knockout. Afterward, a man offers him a scholarship. Tony doesn’t take the scholarship because he has responsibilities. 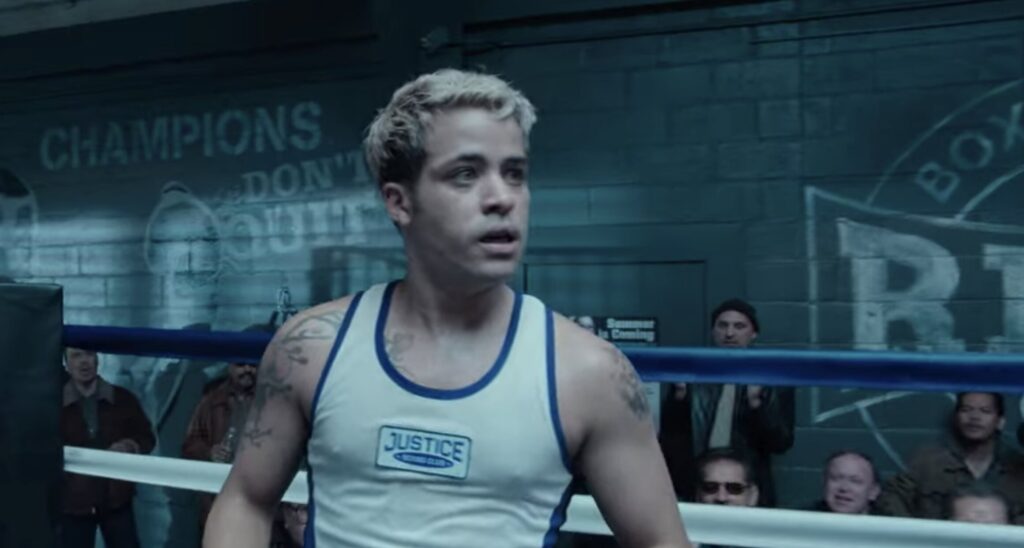 Jessica speaks to Justin as she’s worried about him. Justin tells Jessica that he can tell she likes Diego; he states he isn’t going to get better so it’s better for her to be with him. Jessica tells Justin that she’ll always come looking for him. Justin tells her to go “f*ck Diego” but she refuses to leave but he forces her anyway. 13 Reasons Why season 4, episode 8, “Acceptance/Rejection”sees Justin’s addiction get the better of him.

Clay’s parents go out for date night and Clay is suspicious of all the nights they keep having. Clay follows his parents who end up at the school. They are attending a security innovation parent group. Dean Foundry talks about the apps to track their kid’s laptops, mobiles, and everything that everyone communicates on. Clay’s father explains how Clay did not react well to the lockdown drill. Clay tells Jessica that their parents have complete access to everything and they need to get everyone together but Jessica raises that the group is truly fractured. Alex tells Jessica that he overhead that Diaz is thinking of reopening the Bryce case.

Diego confronts Justin and raises the theory that he killed Bryce. Justin tells Diego that he has no idea what he’s talking about. The pair fight in the corridor; one of the officers picks on Diego because of the color of his skin and arrests him. The students hold a corridor meeting with Headmaster Boland — Jessica and Clay saying they are not going back to class in protest to Diego’s treatment and the increased security. Boland states that Diego will be released and the officer will be disciplined. Clay, Jessica, and Justin say they are not going back to class and state they are not afraid. All of the students walk out of school. 13 Reasons Why season 4, episode 8, “Acceptance/Rejection” exemplifies why a diverse cast is important to tackle key issues in society.

Jessica starts a speech about how they are p*ssed off and the crowd gets behind her. Jessica asks Boland to remove the security infrastructure from the school because the laws are bad. Meanwhile, Alex and Zach start smashing up the school and then run away from officers. Riot police turn up and the protestors stand their ground throwing stuff at them. 13 Reasons Why season 4, episode 8, “Acceptance/Rejection” is ironically and thematically relevant to the protests happening in America right now in a timely chapter with plenty of social commentaries. Inside the school, Zach prepares himself to face the police as he lets Alex run away.

How does 13 Reasons Why season 4, episode 8, “Acceptance/Rejection ” end?

Justin passes Clay the megaphone and tells the students not to be scared and to fight –“F*ck it all”. Alex finds Charlie on the ground and he isn’t getting up. Suddenly the headmaster’s car blows up. It then flits to Clay speaking to his therapist Ellman and he states he doesn’t know who blew up the car. The therapist shows a video of Clay setting Boland’s car on fire — Clay says he doesn’t remember, at all. The therapist says he has a problem here. Flashbacks show Clay did the graffiti, destroyed the cameras, and blew up the car. Ellman says Clay has been keeping secrets from everyone and himself. Episode 8 ends with a predictable twist.