Focused around the love that Walter Mercado brought throughout his life, Mucho Mucho Amor: The Legend of Walter Mercado gives the larger-than-life astrologer another worthy moment in the spotlight.

Focused around the love that Walter Mercado brought throughout his life, Mucho Mucho Amor: The Legend of Walter Mercado gives the larger-than-life astrologer another worthy moment in the spotlight.

This review of Mucho Mucho Amor: The Legend of Walter Mercado contains some minor spoilers.

If you heard the name Walter Mercado during your childhood, you heard his voice, too. In Latin households specifically, he was everywhere. In grandmother’s homes, Mercado was everything. His phrase of “Mucho, mucho amor” became nearly as iconic as his capes, a way to identify his superhero ability to light up the TV screen enough to fill the room the TV sat in.

For those that don’t know Mercado though, Mucho Mucho Amor: The Legend of Walter Mercado would be the right place to start. The documentary, made by Kareem Tabsch and Cristina Costantini, is a brisk 96 minutes of joy, peppered with the eccentricities and difficulties of Mercado’s life. Covering the entirety of his life, the doc spans the majority of the 87 years Mercado graced the ground he walked on until he died last November in 2019. Up until his final days, he attempted to perform and share his love for the people around him, and all of his fans.

It’s incredible to watch the influence one person can have on a large swath of society, especially a person whose story might be new to you. He was willing to hug and kiss those that loved him, and he trusted completely. From this perspective, he’s a rare, pure soul that somehow floated throughout this earth. It’s shocking to watch someone with this uncommon positivity and unbridled joy to simply be living. As he said, “Heaven is today. Heaven is now.” 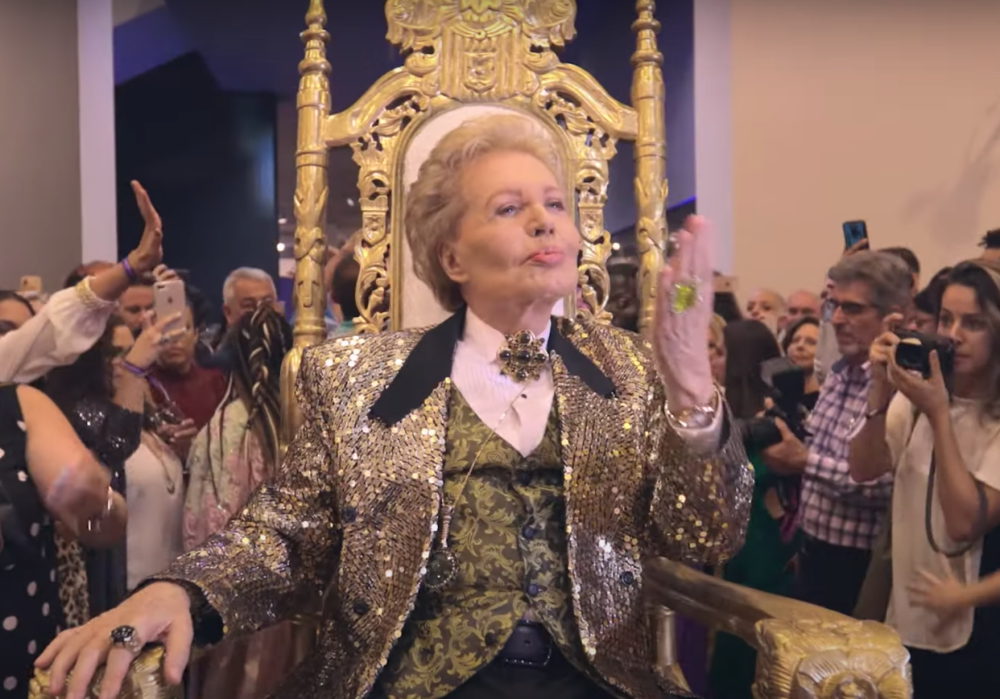 The film starts with Mercado’s rise as a television personality after being introduced to the possibilities as a kid. It follows his phone call infomercials, his relationships to his manager (bad) and his assistant (good), and the advice and decisions that led him to lose control of his own name, likeness, and brand. These moments move the story along at a serviceable rate, but the fascinating elements of the film come out when the directors dive into the minute details of his personality and his sexuality. As they say, Mercado thrived in a religious, somewhat misogynistic culture, yet he was a non-binary, asexual human being, with feminine tendencies and fabulous clothing. For many people in this community, he was a hero, and though the homophobia and anti-LGBTQ comments remained prevalent during his run, he continued to be more than just widely popular — he was beloved.

As someone who didn’t grow up with Walter Mercado, though I have a vague memory of hearing his name in my grandparents’ house, Mucho Mucho Amor brought a smile to my face. It gave me hope for a brighter future, as long as people like Mercado continued to exist. He possessed this magical ability to make you feel like he’s talking directly to you any time he opens his mouth. He had the power to make non-believers listen and fully take in what he said.

The documentary hopes to show the impact that one man had on the world, but it works best when focusing on individual members of his following, from Lin-Manuel Miranda to the bartender making drinks named after the astrologer. In these moments, especially those in the last 15 minutes of the documentary, you feel the weight of Mercado’s existence, the way that entire cultures looked at him with awe and love. This support and affection reinforced the idea that we don’t believe in ideas, but we do believe in people. And plenty of us believed and will continue to believe in Walter Mercado.