A subtle low budget sci-fi horror that first intrigues and then chills, despite the cheap effects.

A subtle low budget sci-fi horror that first intrigues and then chills, despite the cheap effects.

It’s a rare time travel story in which everything turns out peachy. Similar to Volition and Timecrimes, Shifter is a film in which the protagonist discovers something has gone wrong and tries (via a number of “shifts”) to resolve it. But in this film, it isn’t a timeline that needs to be fixed, but the effect her time device has on her body.

Nicole Fancher plays Theresa, who – before Shifter starts – has built a “device” simply because she could. We are never explicitly told what it does, or what it might do for her; but the first time we see her use it, she is amazed to see her cat has appeared inside, and we can put two and two together. I really like the way we are not told everything here: Shifter is not one of those indie horror films which lay everything out in a heavy-handed way, and we roll our eyes, saying, “Yeah OK, I get it.” Instead, it is intriguing and sparse; and there lies its success.

Fancher herself also deserves credit. She allows herself to play Theresa with irritating quirks as well as an overall endearing personality, thereby making her utterly human and relatable. The film gives us more than just her quantum physics “curse”: we get to observe the breadth of her character, from her interest in old cinema to her discovery that she likes to date more than one gender, through her loss of interest in her job. Shifter also quite cleverly shows us how her curse affects all these aspects of her life. 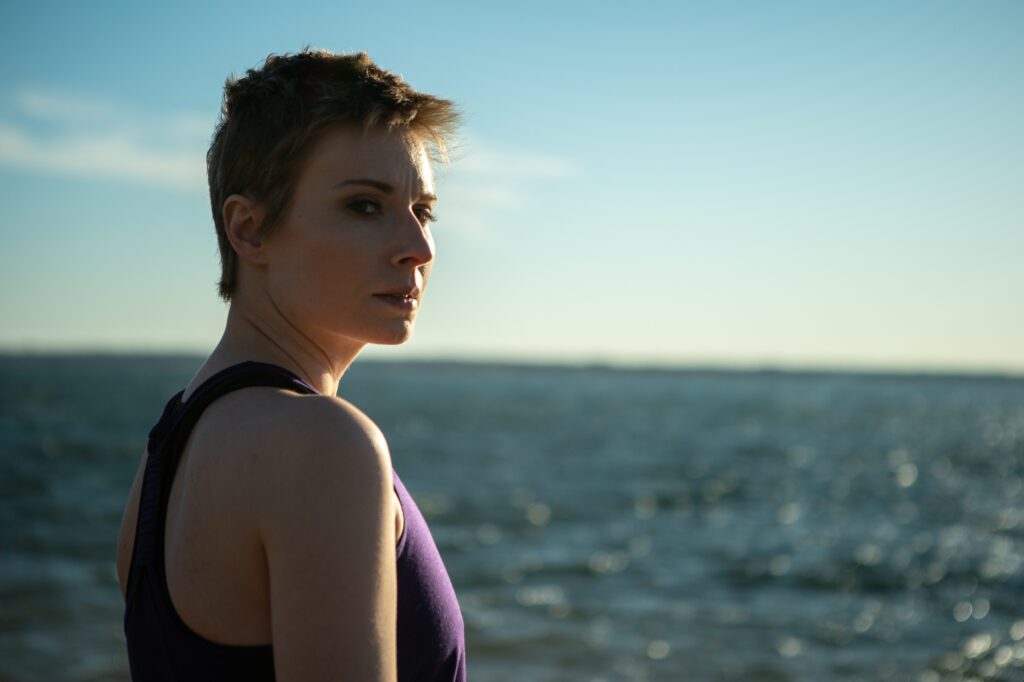 The cinematography and soundtrack help to keep the film patient and subtle, too; which I’ve found can be unusual for low budget films (especially horror). And this is one of the lowest budget films I’ve had the privilege to review, coming in at a budget of less than I earn in a year. On that basis, especially, this was an impressive film.

Jacob Leighton Burns, Vinnie Hogan, and Zachary Burns are the filmmaking team behind Shifter (and a few other features and shorts). Jacob Burns directed and filmed Shifter and co-wrote it with his brother, Hogan was behind the music, and all of them produced it. Based on this title, the only one of theirs I’ve seen, they are a team to watch; especially if they find themselves with more funding.

There are (just) a couple of issues with Shifter, which hold it back from four stars. The main one of these is the special effects: there are moments when what happens to Theresa is chilling, but the majority of what we see is applied in such a way as to almost pull me out of the film. The character and the intrigue prevented that, but only just. The other issue is the only-just-above-average quality of the acting. In the case of Fancher herself, she held her own and the role was not terribly demanding; but the supporting cast was not great, even giving poor screams.

But they were all written well. Shifter has a story that held my attention, moving from intriguing to downright chilling; it was delivered with patience and it had a believable cast of characters. As microbudget indie films go, that’s a win.