Bob needs to take a load off in “Camp Bananas”, but will Abi let him? Meanwhile, a sibling rivalry causes complications at MaxDot, and a surprising new friendship emerges.

Bob needs to take a load off in “Camp Bananas”, but will Abi let him? Meanwhile, a sibling rivalry causes complications at MaxDot, and a surprising new friendship emerges.


This recap of Bob Hearts Abishola season 2, episode 4, “Camp Bananas”, contains spoilers. You can check out our thoughts on the previous episode by clicking these words.

You only need to glance at Bob to know he’s not in the best of health, so it shouldn’t come as much of a surprise that his medical examination reveals dangerously high cholesterol. He thinks the simple fact that he’s alive is enough, but Abishola feels differently. She’s adamant that he needs to make some changes, and she sits his entire family down to explain how they can help. Reducing the booze and junk food in the house is a start. Helping him to manage his stress would also be useful, but of course, nobody is really listening.

It’s Bob himself who has the best idea. He proposes that he and Abishola take the day off work — what better way to relax than to spend a free day with the woman he loves? Well, if she’ll let him, that is. She immediately shoots down all his quintessentially romantic ideas and suggests going to the laundromat instead, since checking things off her to-do list is her idea of fun. On a picnic, she’s genuinely worried about his stress levels, but they’re able to blow off steam a bit by harassing people at the park who aren’t busy enough by their standards. But how they’re eventually able to properly relax is sitting in the laundromat, Abishola studying, and Bob making angry work calls. Some habits are easier to drop than others. 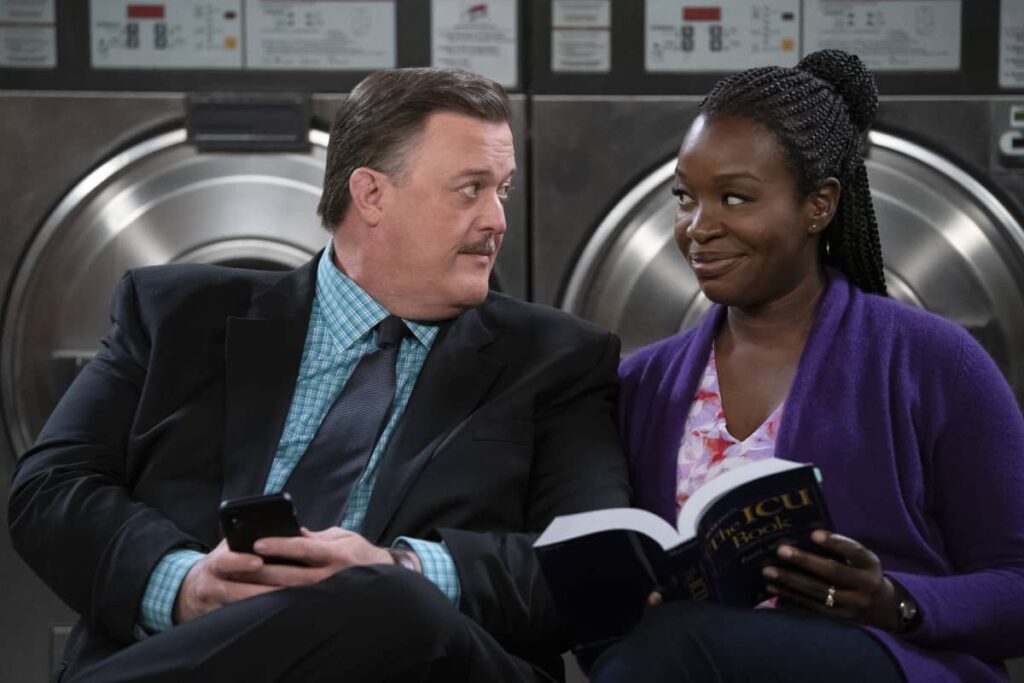 “Camp Bananas” also makes room for B and C plots. In one, Gloria sits in with Dottie, and the two of them get on surprisingly well. They have similar backgrounds but have had radically different experiences predicated mostly on race. It’s an unusual dynamic — we rarely get to see Gloria interact with anyone other than Abishola and Kemi — and I actually quite enjoyed the pairing.

At MaxDot, meanwhile, Christina tries to mingle with the warehouse staff as Douglas has, but she isn’t able to make the same kind of impression. She decides instead to try and exert her authority over Douglas by instructing him to get her lunch and turning his former office into an employee lounge, but he doesn’t bite, which only makes her more incensed. When Kofo and Goodwin are clearing out the office, though, they find pay stubs that reveal just how much more Douglas and Christina make than the warehouse workers. This gets them back on the same page, as they have to try and find a way to appease the staff without having to share out their bonuses. Some things just never change, do they?

Thanks for reading our recap of Bob Hearts Abishola season 2, episode 4, “Camp Bananas”. For more recaps, reviews, and original features covering the world of entertainment, why not follow us on Twitter and like our Facebook page?