“Time to Move Forward” is as much a family drama as a legal one as the weight of Aaron’s bottled-up emotions finally becomes too much burden to carry.

“Time to Move Forward” is as much a family drama as a legal one as the weight of Aaron’s bottled-up emotions finally becomes too much burden to carry.


This recap of For Life season 2, episode 4, “Time to Move Forward”, contains spoilers. You can check out our thoughts on the previous episode by clicking these words.

As I mentioned last week, I’m pleasantly surprised by the direction For Life seems to be taking in its second season. “Time to Move Forward”, which certainly lived up to its title, felt more like a family drama than a legal one at times, addressing many unspoken issues and lingering tensions while also delivering an involving-enough case in the meanwhile. It was, in many ways, a big release of accumulated anxiety, the deep breath you take when you’ve tried to stay underwater a touch too long. Aaron’s reunion with his mother might have been positioned as the climactic moment of the episode, but that was just a fake-out. Instead, Aaron finally unburdening himself to Marie, laying out how he really feels and why, was the real emotional climax of this hour, and it once again leaves the show in a very different place.

For Life, at least in this season, is all about understanding. We, as the audience, understand why Aaron is annoyed that his mother never visited him in jail, but at the same time we understood her apology and justification – and so did Aaron. The show is keeping us on the same page as its characters. Similarly, we understand why Aaron didn’t want to talk to Darius, if not necessarily why Darius was so adamant about speaking with Aaron. He should have known that what he did was a betrayal, perhaps a worse one even than Marie’s. Knowing Aaron so well as a person, Darius must have known how he’d feel; must have known, also, that if the shoe were on the other foot, he wouldn’t have behaved the same way. 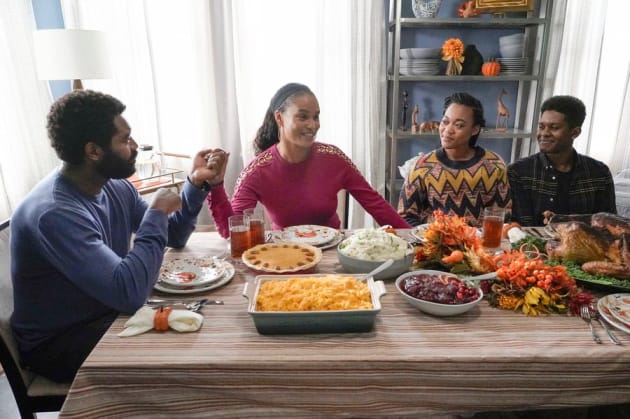 Some might see Aaron reading Marie’s text messages as a violation, but the point there is he didn’t discover anything elicit. He didn’t discover sexy pictures or sex tapes or anything of that sort, but just a domesticated couple going about their family business. But the family was his, not Darius’. You’d never have known from the messages, and that’s what hurt the most. That’s the same sentiment that Aaron took to Marie, eventually. Her moving on was one thing. But her moving on with his best friend was something else. She couldn’t bring herself to move Darius’s belongings out of the house when Aaron came home as quickly as she moved Aaron’s out when he went away – before his appeal, even. There’s no way Aaron could just sweep that under the rug and carry on as normal, which is what it seemed like Marie wanted him to do.

This is partly related to an overarching theme that persists in “Time to Move Forward”, which is Aaron’s lingering connection to prison, prison life, and his fellow inmates. Marie has an issue with his loyalty to Jamal, which really is no different from the loyalty he once felt towards Darius, and she never had a problem with that. Later, it’s mentioned that Aaron isn’t going to be able to make headway in his legal career while he’s still shackled to the prison, but it’s a case he takes at Jamal’s request that becomes the legal subject of the episode. Ironically, prison is the only thing continuing to give Aaron trust and consistency. Jamal reaching out for a favor might be seen as him exploiting Aaron, but it might just as easily be seen as Aaron having only one person left in the world who truly trusts him.

There’s a part of me that’s relieved this case wasn’t the usual social justice issue, since For Life has dabbled in that arena already and will inevitably do so again, and other shows like All Rise are doing it consistently week on week. This case essentially being predicated on both a misunderstanding and a lingering fear of Albanian gang violence felt fitting for how closely related it was to Aaron’s time inside, but the fact he was defending a staunch family man made for a neat parallel to his own situation. He was able to get Ben off and return him to his children; if only he could smooth things out for himself in the same way.

Thanks for reading our recap of For Life season 2, episode 4, “Time to Move Forward”. For more recaps, reviews, and original features covering the world of entertainment, why not follow us on Twitter and like our Facebook page?