Hunter Hunter review – a traditional rural family, and other animals

A film that could be seen as a fairy tale, a horror, a survival thriller, or a dish of food for thought, Hunter Hunter is tough to watch, but tense and ultimately satisfying.

A film that could be seen as a fairy tale, a horror, a survival thriller, or a dish of food for thought, Hunter Hunter is tough to watch, but tense and ultimately satisfying.

The title Hunter Hunter is an interesting one: it tells you clearly a major theme of the film (I prefer those to titles made up of a person’s name) and suggests that there is more than one. Indeed I think I observed four types of hunters.

The most obvious hunters are the Mersault family in the story: Joseph (Devon Sawa), his wife Anne (Camille Sullivan), and their adolescent daughter Renee (Summer Howell). They live in the middle of an unnamed North American forest (Hunter Hunter was filmed near Winnipeg), they live off the forest and make a living from it, trapping animals for fur. This is a home, a trade, and a tradition that has come to Joseph down his family line, and though his wife is starting to crave the stability of town life, it is being passed on to Renee. Anne has had little to do with the trapping, skinning, and hanging of game until now, focusing more on the business and housekeeping side of things. But when Joseph heads out hunting for a predator that’s eating what they catch, Anne has to become protector and provider; and she really does.

So here’s the other main hunter: a wolf. From what nearby rangers say, I gather bears and wolves are native to this area and have a right to be there (more than the Mersaults do, some say), but this particular wolf is “mean”. Anne seems to feel the wolf is stalking the family, though the only thing there is real evidence of is that when he steals from their traps, their livelihood is affected; so in a way, it’s no wonder she takes it personally. As well as these key hunters, it also looks as though there’s another predator at work, as people in the nearby town have been going missing. This hunter must be at home in his environment, as the local law enforcement doesn’t know where to direct their hunt until one of them is hurt. 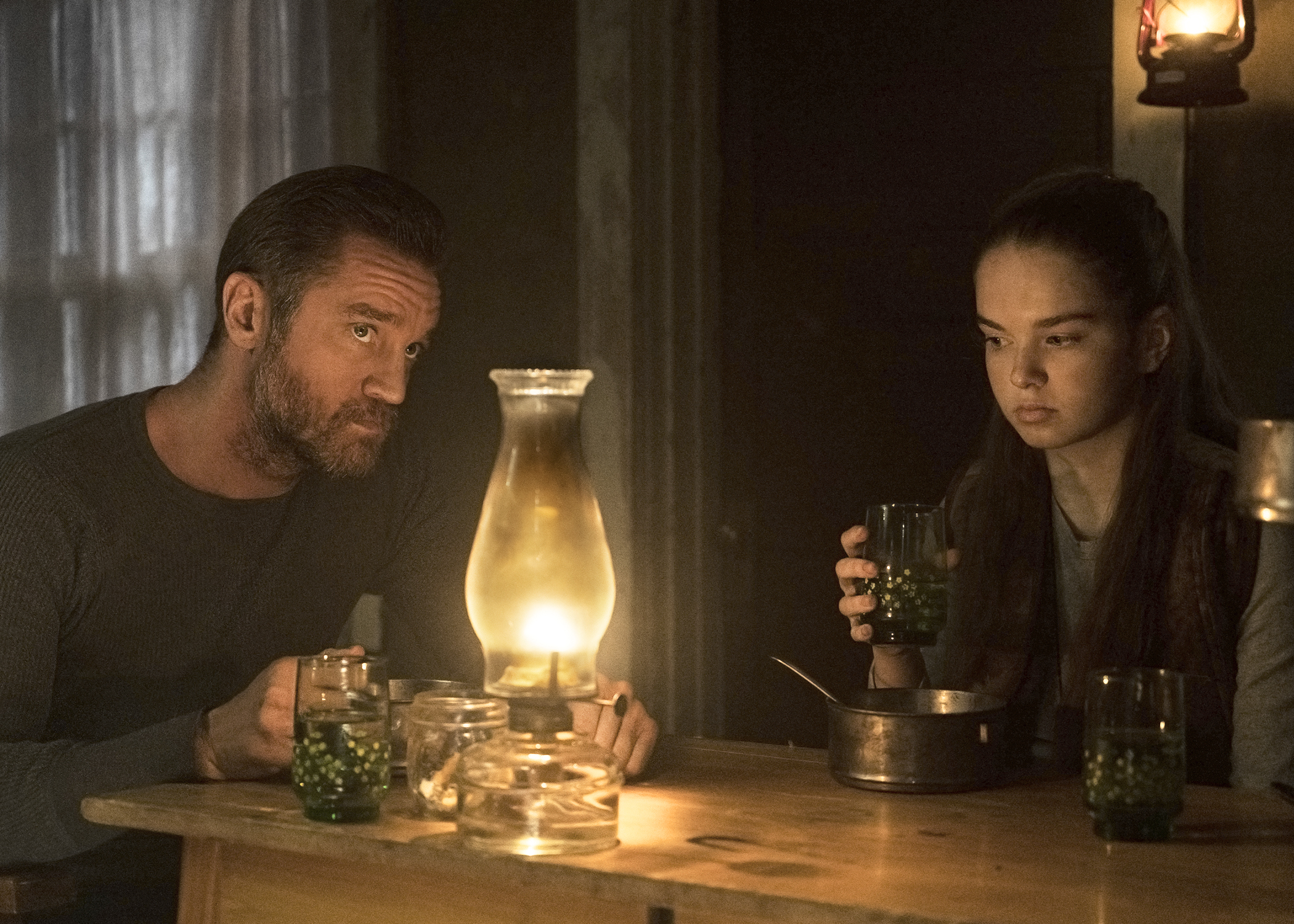 Despite the small cast, there’s a lot going on in Hunter Hunter, with interlinking subplots and interests. These layers are uncovered fairly slowly for what is essentially a ninety-minute film, and none of them are given much detail: the depth is in the characters’ personalities, the contrasts, and the surprises. It started out with clear echoes of Leave No Trace; there were also similarities with the more recent Rose: this family stays isolated (though for different reasons), has a lifestyle that is not easy to maintain, and their routines are rocked by a stranger (Nick Stahl). Hunter Hunter is a survival thriller – at least once the spotlight is on Anne – though I have to say that writer/director Shawn Linden’s goal to produce a grown-up fairy tale in that style was met, for sure. Although this story is about the real world, rather than fantastical, it uses simple elements in a time and place that could be almost any, to give an audience something to think about.

As you might expect from both the title of the film and what I’ve already described, violence towards animals (including trapping, killing, and skinning) features heavily in Hunter Hunter; more prevalent (but perhaps not quite as extreme) as the violence towards people. The explicit nature of these scenes is chosen to raise questions in the viewer about what forms of hunting are reasonable: is it acceptable to hunt for food, for survival, for tradition, for profit? What about hunting to inflict deliberate pain, out of anger or revenge? The contrasts between different people’s attitudes are thought-provoking, to say the least; and these relate to the country/town/city lifestyles in general as well as towards prey.

There may well be other themes here too if one looks close enough: parenthood, tradition, respect for Nature. These are very easy to overlook, though, when the viewer is confronted by the shocking violence. It occurs occasionally in the first half of the film, explicit enough that we know this film isn’t going to go easy on us, but fairly small scale. Then some shocking images which don’t quite fit with the setting are introduced and it becomes difficult to know where the film is going to go. You might be reading this because you’ve heard Hunter Hunter described as one of the strongest horror films of 2020, and by now you may be wondering why. I certainly did when I watched it but understood why when I reached the end, though it’s definitely a film that straddles the thriller/horror borderline.

I mentioned the fairly simple writing earlier: unfortunately, I think an extra explanation or two might have helped me, at least, as I felt I missed something in my understanding towards the end. That said, the all-around solid performances and luscious cinematography made up for that so well that I didn’t mind: perhaps ambiguity works for the plot here, just as it does for the moral treatments.