It suffers for its length, but Superman: Doomsday is a fun and exciting take on Superman’s last hurrah.

It suffers for its length, but Superman: Doomsday is a fun and exciting take on Superman’s last hurrah.

Superman: Doomsday is a DC Universe Animated Original Movie. Check out the full archive by clicking these words.

Like most of DC’s original animated movies, Superman: Doomsday is based on a popular story arc from the comic books or graphic novels – in this case, the iconic 1992 storyline The Death of Superman, which was recently butchered in live-action by Batman v Superman: Dawn of Justice. It’s an admittedly loose adaptation, but if you have even a passing familiarity with the character you’ll recognize most of the major dramatic beats: Superman apparently meets his demise at the hands of Doomsday, Metropolis is forced to adapt to life without him, and then he eventually returns, as Superman always must.

Full disclosure: A “passing familiarity” is all I really have with Superman and, for that matter, all of DC’s and Marvel’s superheroes. I didn’t grow up reading comic books, I couldn’t give a single discount f**k how you or anyone else thinks any given character or story should be presented, and I’m approaching these movies the same way I approach every other comic-book adaptation: as an ignorant, oblivious outsider. And from that perspective, Superman: Doomsday kind of works.

Don’t get me wrong, it’s hardly a classic, but as a movie of two very distinct halves, I can safely say that at least 50% of it is a damn good time and the rest only falters because of its own misguided ambition. It also quickly establishes itself as a more mature, considered interpretation of the character than you might be expecting given the format; I’m not sure I’d necessarily say it’s for adults, but it’s not strictly for kids, either. If you imagine a Superman story pitched quite directly at older teenagers who are more or less ready to look at the world from slightly more complex perspectives but are only willing to do that through familiar leftover prisms from their childhood, you have a pretty accurate idea of where Superman: Doomsday positions itself in terms of tone. I mean, one of the opening scenes is a non-too-subtle conversation between Supes (Adam Baldwin) and Lois Lane (Anne Heche) about how best to do the no-pants-dance without Lois accidentally being snapped in half.

These introductory sequences are easily the film at its most confident and engaging. Others include a surprisingly brutal introduction to Doomsday, the genetically-engineered alien super-soldier unwittingly dug up by LexCorp scientists; and Lex Luthor (James Marsters) himself, who, outside of an opening monologue, is first presented to viewers as he proudly discusses how best to turn a newfound miracle cure for muscular dystrophy into an extortionate lifetime treatment. Classic supervillain stuff. 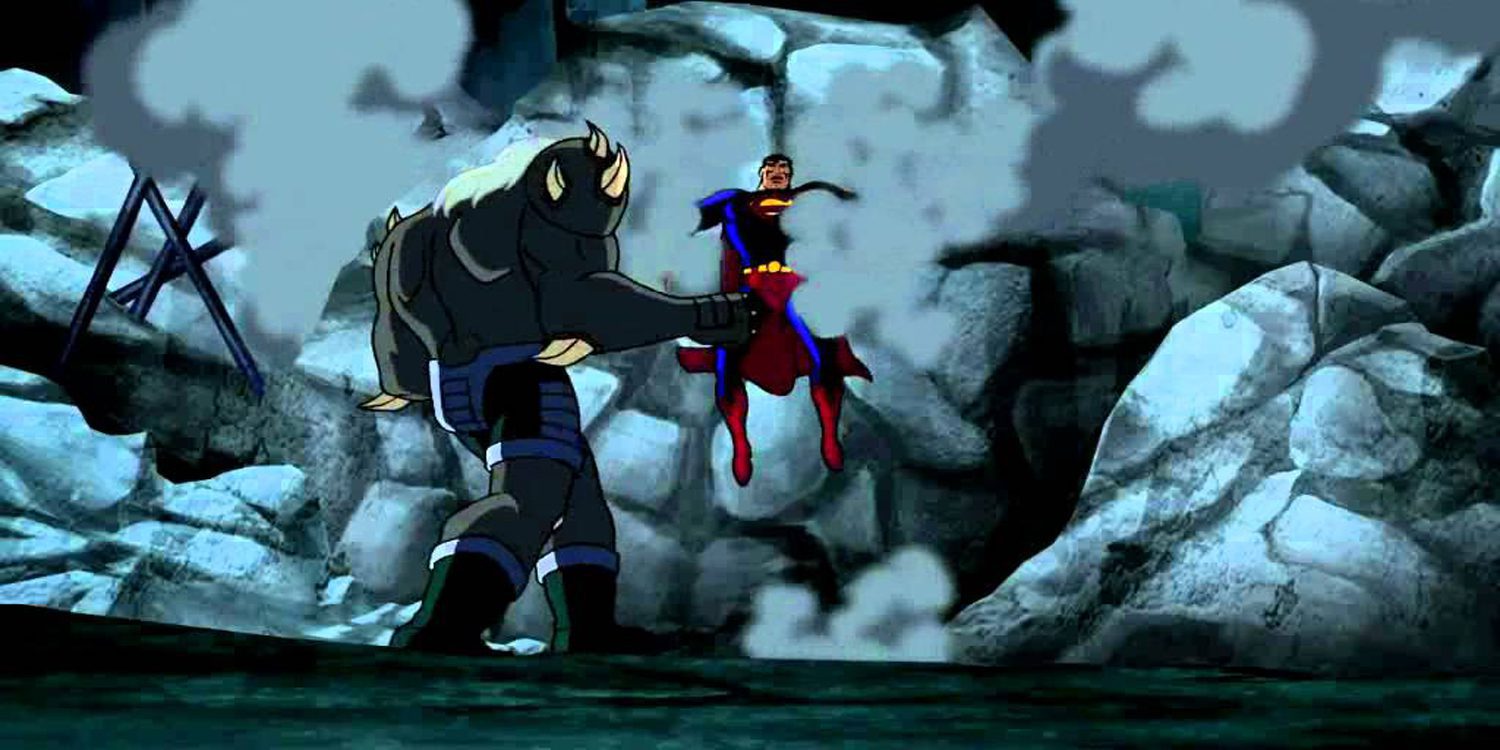 Some of this feels noticeably underwritten, but it effectively introduces the necessary components for a bombastic, city-wide showdown between Superman and Doomsday, which is a lot of fun. Bruce Timm and his co-director, Lauren Montgomery, clearly understand these characters, and how best to mine weighty, satisfying action out of animation. It’s essentially a ten-minute destructive wrestling match which levels half of Metropolis and culminates in a German suplex from f*****g space. Yes, Superman: Doomsday was smashing cities to bits and causing incalculable loss of innocent life way back in 2007, so you have to wonder why people got so uppity when Man of Steel did it.

Anyway. An unfortunate consequence of Superman’s death is that it punts the movie into a second half which can’t properly accommodate its repercussions. And there have to be repercussions – Superman isn’t just a character, he’s the walking embodiment of patriotic American idealism, and there has to be some explanation of what the absence of that means, both personally, to Lois and his adoptive mother, Martha (Swoosie Kurtz), and philosophically, to the people of Metropolis. Superman: Doomsday wants to touch on this, and it tries to, but seventy-five minutes don’t offer enough time or space to do so in a way that feels satisfactory.

More problematic is a subplot that deviates from the original source material and sees Lex Luthor, annoyed at not having killed Superman himself, create a clone of the Man of Steel which he periodically tortures with kryptonite knuckle-dusters. It’s not a terrible idea, and the fake Superman is an enjoyably smug, self-righteous tosser, but it’s another packed-in aspect of the movie’s second half that feels undercooked and unsatisfying. (The most annoying of these is a ludicrous explanation for the whereabouts of Clark Kent, but I’m long since numb to the fact that a building full of investigative reporters can’t figure out that Clark Kent is actually Superman).

Whatever. The Death of Superman has always been a thematically ambitious Superman story, largely because his eventual resurrection literalizes the messianic qualities that had previously been just a reflection of America’s noble and heroic ideals back at itself. There was never really a chance that an hour and fifteen minutes of animation was going to be an appropriate treatment of that. But Superman: Doomsday does an admirable job of it, and despite its disappointing latter half, it’s still a well-drawn and reasonably compelling take on Superman’s last hurrah. If nothing else it provides some legitimately exciting action, and an answer to the eternal question of how Superman and Lois Lane have super-sex, so if you’ve ever wondered about that it’s probably worth the watch.