Justice League: Crisis on Two Earths works as a fun alt-universe adventure thanks to being divorced from any broader continuity, and if it feels a little thin, it mostly makes up for it with action and a ballsy ending.

Justice League: Crisis on Two Earths works as a fun alt-universe adventure thanks to being divorced from any broader continuity, and if it feels a little thin, it mostly makes up for it with action and a ballsy ending.

Justice League: Crisis on Two Earths is a DC Universe Animated Original Movie. Check out the full archive by clicking these words.

If there’s any one thing that has prevented me from getting properly invested in comic-books over the last twenty-six years, it’s a profound fear of multiverses. Parallel timelines, alternate dimensions, crossovers – they all terrify me. It’s difficult enough to catch up with almost a century of stories that encompass a whole host of heroes and villains across two major comics companies. When you couple that with the crippling fear that at any moment the entire continuity could be detonated, its beloved characters jettisoned into nothingness or, worse still, smashed together with other, alternate versions of those characters, the point of getting into any of it starts to elude me. So, you’ll excuse me if Justice League: Crisis on Two Earths, from its title alone, had me a little bit worried.

Thinking about it, I shouldn’t have been concerned. One of the distinct advantages of these animated originals (this movie is the seventh of them) is that they’re generally adapted from iconic storylines or high-concept one-shots; they’re not intended to serve any broader continuity or even establish a new one of their own. They’re originals. And that means that an alternate-timeline narrative, like the one found here, can work in the way it was intended to work: as a fun inversion of familiar characters, that functions on its own terms and has no lasting effect on the status quo.

As such, it’s easy enough to buy into the idea of a noble, heroic Lex Luthor (Chris Noth) when he turns up from alternate earth with a problem: The Crime Syndicate – evildoing, mob-styled doppelgangers of “our” earth’s Justice League – are f*****g things up. They’ve eradicated the various versions of the heroes across the entire multiverse, and all that remains to thwart their superpowered tyranny is Luthor, who was the leader of his earth’s Justice League, and the usual DC stalwarts: Superman (Mark Harmon), Batman (William Baldwin), Wonder Woman (Vanessa Marshall), Flash (Josh Keaton), Green Lantern (Nolan North) and Martian Manhunter (Jonathan Adams).

Crisis on Two Earths is loosely based on both the Crisis on Earth-Three arc of Justice League of America, scripted by Gardner Fox in 1964 and Grant Morrison’s 2000 graphic novel JLA: Earth 2. It was also initially intended to serve as a bridge between the two TV series’ Justice League and Justice League Unlimited, which I mention as a possible explanation for why the picture is so devoid of meaningful character development or interaction. Without a series to prop up these versions of the familiar characters, and without any real effort to acclimatize a new audience to them, you’d be forgiven for mistaking our earth, and our Justice League, with one of its alternates. The downside of the otherwise-advantageous original format is that these things have to be taken on their individual merits.

Then again, how much development is really necessary here? It’s simple enough to grasp the moral underpinnings of an alternate universe – the villains are the heroes, just in a worse mood. And even though the group dynamics and interpersonal relationships could use a little more fleshing-out, our Justice League functions as a group thanks mostly to a decades-long presence in the popular culture. We know why Batman’s sulking – because he’s Batman. We know why Superman is so eager to save millions more lives – because he’s Superman. The Flash can make comic-relief jibes and Green Lantern can fret about interdimensional jurisdiction, and it’s funny because even someone like me, with only a cursory understanding of this mythology, knows that’s more or less what’s expected of them. 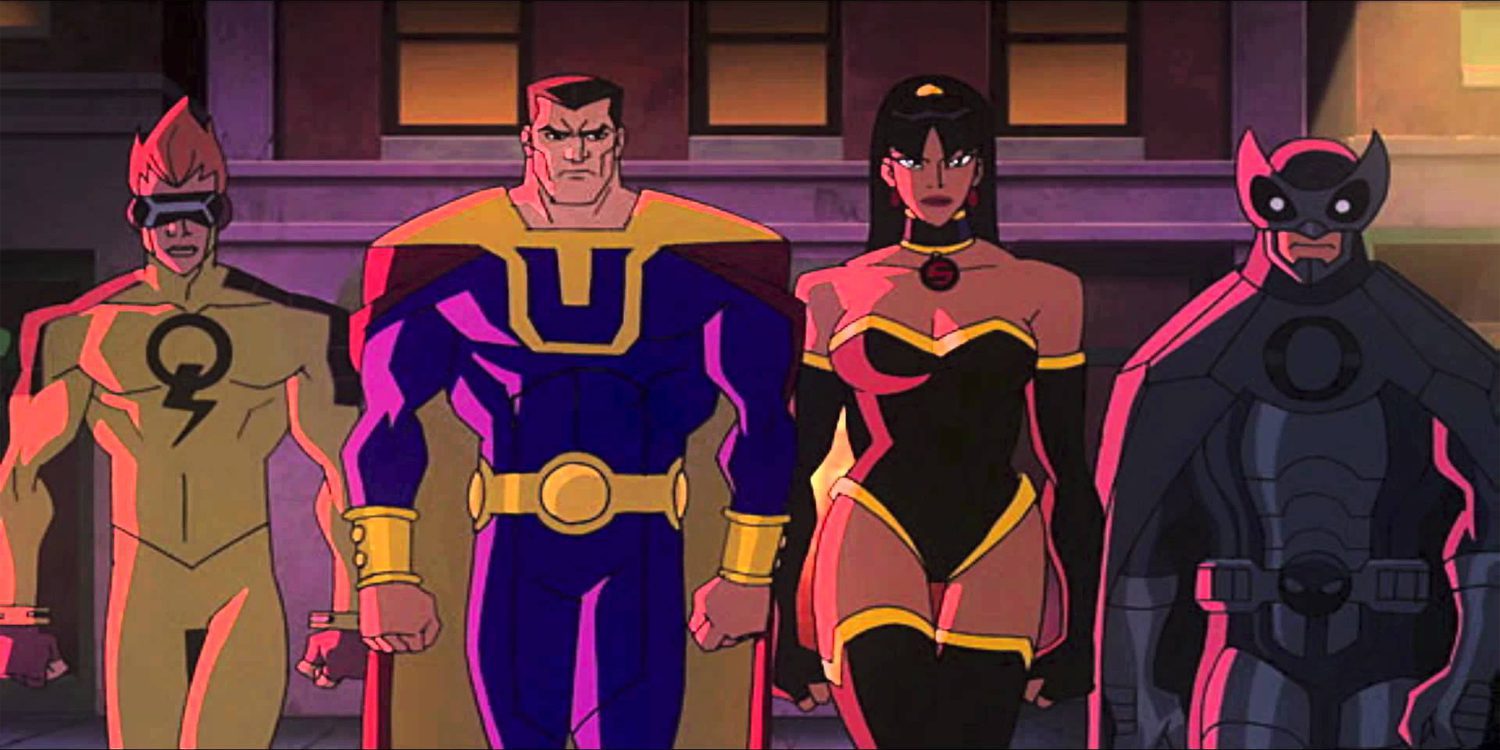 More fun, then, are the villains, organized as regional kingpins with teams of superpowered underlings beneath them. Ultraman (Brian Bloom) is alt-Superman, Superwoman (Gina Torres) is alt-Wonder Woman, while Owlman (James Woods), Power Ring (Nolan North again) and Johnny Quick (James Patrick Stuart) are alternates of Batman, Green Lantern, and Flash, respectively. Like Superman/Batman: Public Enemies before it, Crisis on Two Earths’ premise is essentially a line on which to hang a handful of epic superpowered smack-downs between the heroes and their darker counterparts, and the direction, courtesy this time of both Lauren Montgomery and Sam Liu, handles that as capably as ever.

Elsewhere, there are tokenistic subplots that attempt to weave in the upper-echelons of supervillain management and an alt-earth President who’s afraid to stand up to the Crime Syndicate, but they feel notably underwritten. The rich character work and thoughtful plotting you might have come to expect from Justice League properties just isn’t here, and while writer Dwayne McDuffie does a reasonable job, with particular credit being directed towards Owlman’s well-articulated arguments against the whole multiverse concept, you never get the sense his job was to do much more than set up the action sequences.

That having been said, this feels like a more well-rounded and intelligent picture than Superman/Batman: Public Enemies did, even though both rest almost entirely on facile thrills. At the very least, Crisis on Two Earths eventually heads in the ballsy direction of having its heroes act decidedly unheroically, and that’s something, even if it isn’t very much. The bottom line is, if you liked the previous six animated originals, you’ll almost certainly like this one. It isn’t the best of them, but it’s far from the worst. And you can take some solace in the fact that, by design this time, none of it really matters.