Surprising absolutely nobody, The Emoji Movie is an insulting travesty without a shred of wit, intelligence or worth; a shameless, unfunny slab of advertising that exists entirely to slobber all over the shiny corporate c**k whose limp spurts of digitised e*******e droop from the movie’s saccharine façade like the tears of all those parents who were dumb enough to buy tickets for their children to see it.

Having said that, it did surprise someone: Dan Hart, my very own colleague here, who insisted live on air that The Emoji Movie would secure a Tomatometer score of over 50%, and even bet ten pounds of Her Majesty’s finest sterling on the matter. I can’t get back the 90 minutes I spent watching this appalling aberration, but at least I’m up ten quid.

Well, okay then. What’s it about?

Many moons ago, when I would drink and take drugs and scrawl bizarre, elaborate text messages to women of my general acquaintance, I often thought that there might be a teeming metropolis within my phone whose denizens were conspiring against me. I was, as I say, on drugs at the time, but The Emoji Movie uses the paranoid fantasising of a drunk, womanizing nitwit as its central conceit. In the phone of Alex (Jake T. Austin), a 14-year-old schoolboy who lusts after one of his classmates, is Textopolis; here, all the various emojis live, waiting to be called upon to fulfil their singular function of communicating one very specific thing. Gene (T.J. Miller), the film’s nominal hero, is a “meh” emoji, like his parents (Steven Wright; Jennifer Coolidge). He’s cool and indifferent. He’s the kind of emoji a 14-year-old might send to his crush. But Gene is irritatingly exuberant, and can’t settle for one emotion; when Alex uses him, he panics and contorts himself into so many expressions that it’s impossible to determine what he represents.

You’d imagine that Alex could remedy this situation quite easily, perhaps by sending a follow-up message, or a different emoji, or simply communicating with his mouth, rather than his phone. He could cut out the middleman and just send the eggplant. But The Emoji Movie is unconcerned with trivial matters such as how actual human beings might think and behave. It imagines that what goes on inside one’s phone is as pressing an issue as what one’s toys or pets get up to when their owners aren’t around; Hollywood’s typical animated formula, easy to imagine and easier to sell, but shrunken to an iPhone display, because these days, so many eyes don’t stray beyond one. I wondered, almost immediately, if anyone outside of Sony Animation had ever pondered this notion, and concluded quite quickly that the world has no use for such a thing. 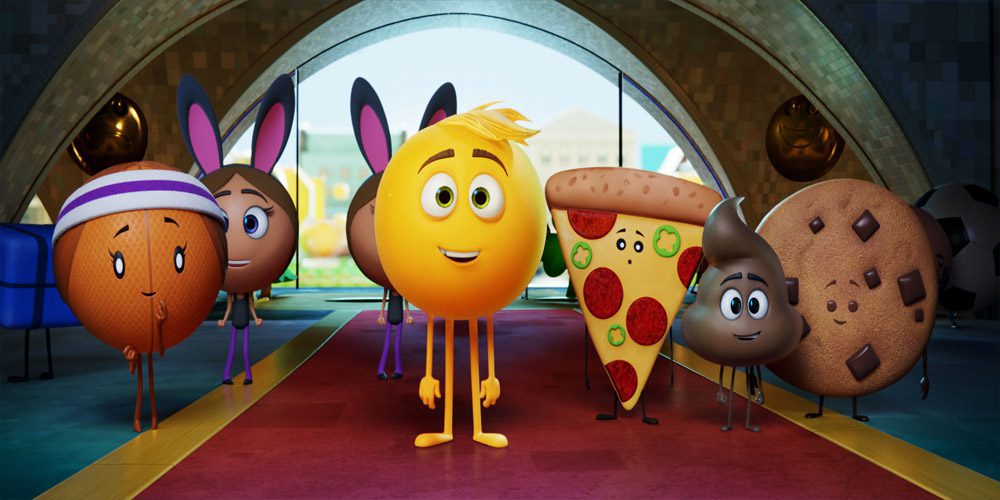 But what happens to Gene?

Fearing his malfunctioning, and what it might mean for the other emojis, Smiler (Maya Rudolph), the grinning, somewhat psychotic leader of Textopolis, decides to have Gene deleted. Were life fair, that’s where the movie would end. Gene would be deposited in a recycle bin, and as his dumb, cheap-looking face cycled desperately through expressions, he would wink into nothingness, never having found the exact face to summarise how worthless and exploitative his existence really was. Alas, life is not fair, and as such he meets the once-popular Hi-5, another outcast, who informs him that a master hacker, Jailbreak (Anna Faris), can reprogram him. Hi-5 is played by James Cordon in a performance so insufferable that whenever he spoke all I could imagine was using his character to slap him repeatedly across the face.

More happens, none of it funny or clever or of a quality that might constitute even basic entertainment. The destination is the fabled Cloud; a utopia that can only be reached by navigating various well-known apps – Candy Crush, Just Dance, Instagram, Dropbox – the owners of which presumably greased some palms at Sony for a certain amount of exposure and lip-service from the characters. Dropbox, the movie assures us, is secure against malware, which is perhaps the most astonishingly cynical line ever uttered in a movie. Eventually, Alex gets so sick of the glitches inadvertently caused by Gene’s journey that he endeavours to have his entire phone erased. Were it up to me, this would have happened. Yes, because to wipe this movie and everything in it from reality would satisfy me greatly, but also because how can a boy who plays Candy Crush in 2017 ever be expected to pick up chicks?

It can’t be that bad.

I admit, there are worse things to have happened to children, such as tuberculosis, but only sweatshops in Bangladesh have so nakedly sought to exploit them for profit. As depressing as it is that an entire generation consider emojis to be the pinnacle of contemporary communication, I don’t wish ill on those misguided little twerps any more than those, like myself, who were consumed by earlier trends. I was once one of those insufferable dweebs who rote lyk dis, but I learned from that, and now I make a living writing mean-spirited film criticism. There’s hope, even for emoji enthusiasts, but a movie like this one, a leprous sore peeled in our children’s faces, makes their eventual betterment a longer, more drawn-out process. These emojis are pulsing, cancerous tumours clamped to our smartphones and our tablets and our computers; dangling from the big screen like Sony’s pendulous bollocks.

I mean… aren’t the performances good? 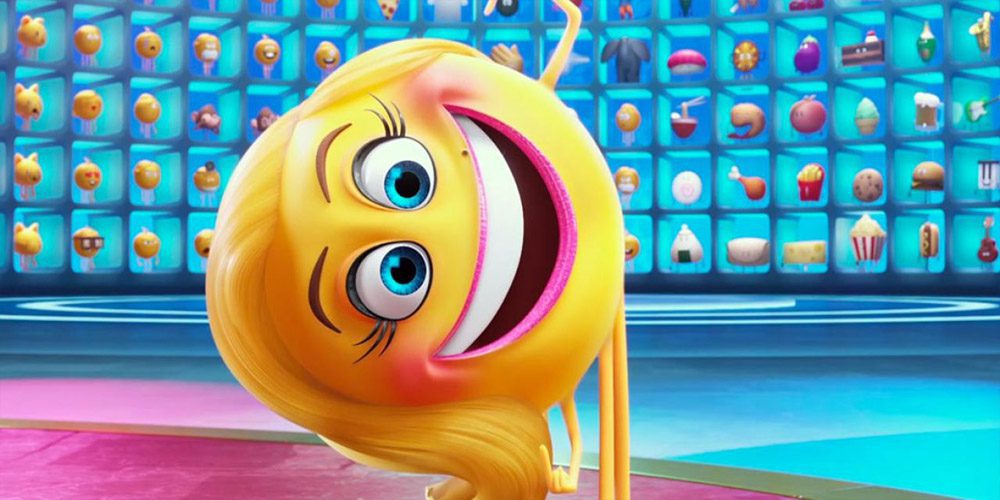 Perhaps, though if they do they’re worthy of derision. There were plenty in my screening, and none were laughing. The lack of enthusiasm, humour, excitement or insight is enough to overwhelm the colourful presentation, the Valuable Lessons™ about being true to oneself, and the vague novelty of seeing familiar buttons on your phone terraformed into explorable real estate. The baked-in cynicism is overwhelming, even for the children who were shuffling in their seats and delving constantly into their popcorn bags. Perhaps they couldn’t identify it as corporatist cynicism, necessarily; that would – let’s be frank – be giving anyone who paid to see this more credit than they deserve. But the stench of greed and artistic abdication is strong enough to snake its way into the nasal cavities of all ages, overpowering the reek of popcorn butter and nacho cheese, settling into the pores such that even after having left The Emoji Movie, it stays with you, lingering, like necrotic meat or a sad, dying, sodden old dog. I didn’t pay to see this movie, thanks to a convoluted series of circumstances that I won’t bother explaining, and upon exiting I was still tempted to request a refund for having wasted my valuable time on such a worthless, thoughtless, execrable piece of garbage.

You don’t recommend it, then? 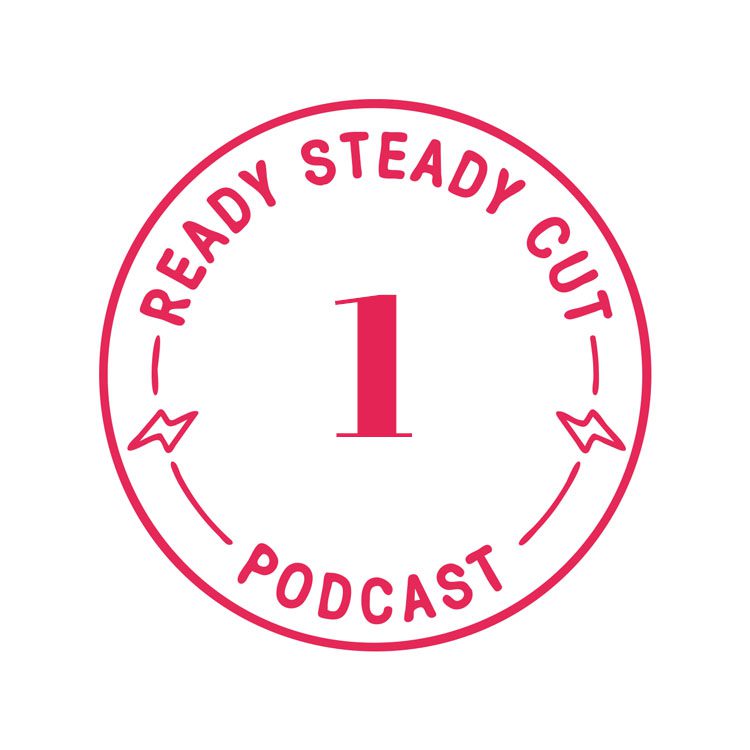