This film is one of the best depictions of hip-hop artists in a film. We recently reviewed Notorious (2009) and All Eyez on Me (2017) which follow hip-hop/rap artists Notorious B.I.G and Tupac Shakur and we were left underwhelmed, particularly by All Eyes on Me. Everything which was questionable in those movies, such as the casting choices (In fact, Ice Cube’s own son was cast to play his father in this film), the flow of the movies, the way the artists themselves are portrayed, are all excellently done in this film. Whether you are a fan of the group and retrospective artists or not, you will not be left disappointed.

It inevitably portrays the evolution of political hip-hop and rap. Although at this time this particular genre of hip-hop and rap wasn’t by any means new on the scene, it was still mostly performed underground. It was revolutionary that this type of music turned mainstream. Throughout the movie, we see how the group’s music is used to reflect the brutalities of real life that they suffer. A prime example of this is after the whole group is subjected to discriminatory treatment from the police, Ice Cube (O’Shea Jackson Jr.) writes the lyrics to “F**k the Police” which talks about the prejudice of the police force due to the colour of their skin and the way they look alone. As well as this the movie also portrays other elements of the environment which provoke their lyrics, for example at the very start of the movie you hear quotes used from the “War on Drugs” campaign which was introduced in America to reduce the trade of illegal drugs within the country, however it turned into a weapon which law enforcement used against minority groups unfairly to arrest, harass and incriminate. Although not shown in the film, Eazy E (Jason Mitchell) witnessed the death of his cousin in a drug deal, which turned disastrous, and thus would cause the motivation to change his lifestyle and would then lead on to co-find N.W.A.

As it should be well known, Andre Young or Dr Dre (Corey Hawkins) and four other members of N.W.A were born in Compton, a city in Las Angeles. 91.5% were killed by guns in Compton alone, compared to the national average of 67.7% between 2000 and 2016. Compton’s reputation for violence and crime has been and still is undisputed. Although this was mainly occupied by white families in the early 1900s and even resided in by the Bush family at one point, black groups started to form not long after. In the 1920/30s black groups started to form to a backlash against brutality experienced by white gangs. Although not known as profoundly as some of the groups in LA now, such as the Bloods and Crips, groups such as the Kelleys, Blogettes and Driver Brothers formed. Compton was a segregated area and it was also at this time that law enforcement was hired to ensure the area stayed segregated. 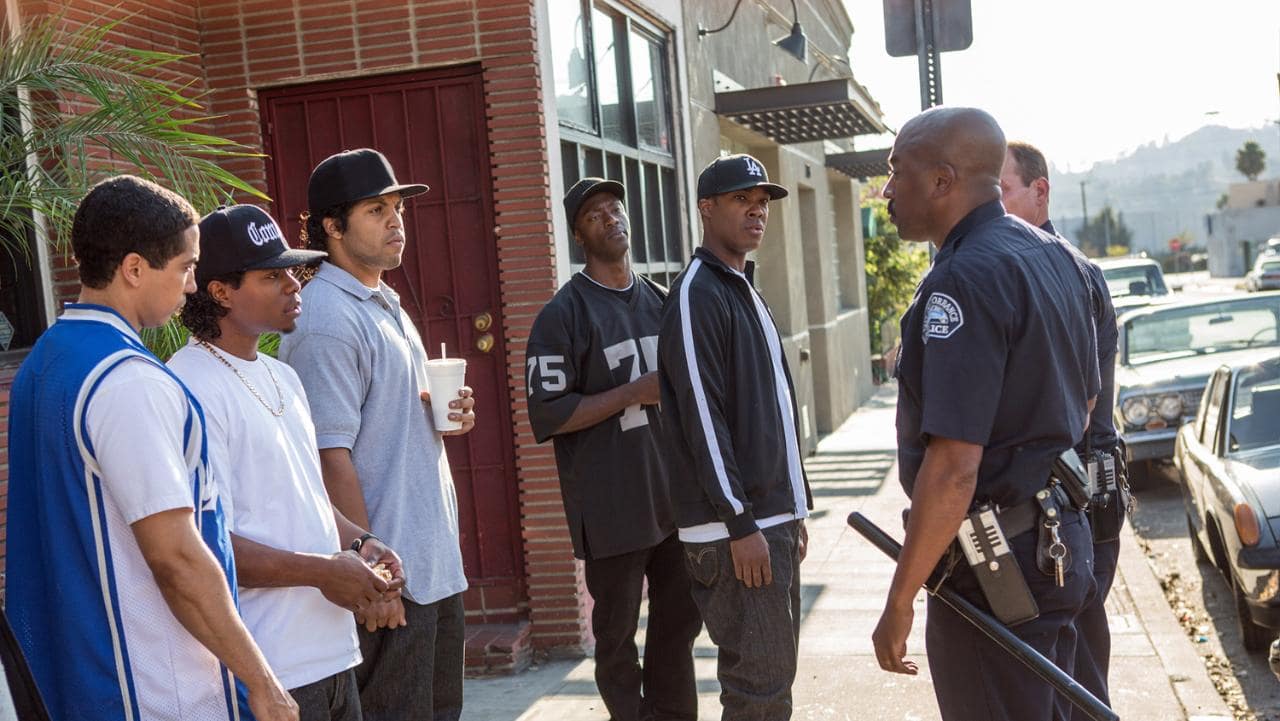 Twenty years later, in the 60’s, and white gangs were growing resentful towards black groups as they were challenging the discriminatory housing law. The law prevented black families from purchasing houses outside of their original “settling area” and also prevented them from integrating into public schools in the same area. Although more and more black families started to move into Compton after the 1965 Watts riots and a school was even built to accommodate the increasing need, white groups were still outraged towards the change and groups became increasingly violent. After the area was mostly resided in by African Americans, little to no money was put into developing the area. Although this history is not shown in the film, we do see two huge significant social events, which caused public outrage. It is at a pinnacle point for the group in the film we see a particular disgrace surrounding police brutality. The Rodney King case, briefly explained, involves King being tasered twice and battered mercilessly by Los Angeles police officers and subsequently suffered a fractured facial bone, a broken right ankle, and multiple bruises and lacerations whilst unarmed and without provocation. The film also shows the 1992 LA riots, which ensued due to the Rodney King case ending and a verdict of not guilty being given to all the officers involved. Property damage was approximately one billion dollars. There were lootings, arson attacks and killings. The riots were so meaningful, prolific opposing gangs the Bloods and Crips, who are profoundly known for their violence all around the world, unified during the riots, in the film, this is shown as a red and blue bandana tied together to represent the unification of what are usually two rivals. The portrayal of these events in the film not only shows how NWA provided a much-needed outlet publicly, but they also showed how the matters expressed lyrically in the group are not issues which only a handful of African-Americans feel and felt but the whole of LA.

I understand that I may show a huge bias writing this piece, not only have I been brought up listening to N.W.A but I am also passionate about black rights and social exclusion. With that being said I am positive this film is a success not only because it is interesting to watch as a fan of the music, but that it also shows the multiple barriers Africans Americans were facing.

Enjoyed reading this opinion? Then you will probably like listening to us too so check out our podcast