The Florida Project follows six-year-old Moonee throughout a single summer, when she gains and loses friends, causes a good bit of trouble, and learns that the world she’s fearlessly facing is a harder place than she’d imagined. In short, The Florida Project blew me away. It is a heartbreaking and poignant slice of life story.

From the start, Moonee (Brooklynn Prince) takes the audience captive with her nature. She’s tough, abrasive at times, but ultimately still a very real little girl. She and her mother Hailey (Bria Vinaite) live in the Magic Castle, a vivid purple hotel populated by a group of residents who attempt to live there in the long term, either working low-income jobs, panhandling, or scamming to make their week’s rent. The hotel’s manager Bobby (Willem Dafoe) just wants to keep the place clean and tidy, maintaining their delicate ecosystem from day to day. Moonee’s mother is a troubled woman who struggles to make ends meet and cannot hold a job, and despite her protestations, we never see her attempt to gain employment. She sits in her hotel room, smoking and planning her next scam while her daughter runs off to who knows where, up to who knows what.

Just how sad is Florida Project?

Moonee’s life is so sad and all too true for so many people. Despite this she doesn’t know that anything is wrong with the picture of her life. It’s just the way things are, and she has true joy in her daily routine. Tromping around the Everglades and the hotels nearby, causing trouble and having fun, living life as she can. She is growing up in the shadow of the Magic Kingdom, but she lives among the knockoffs. In the Magic Castle, while her best friend lives in the Futureland hotel, and she walks by Disney knockoff gift shops. She’ll never enjoy Disney World herself and will likely always live just below those who think nothing of such luxury.

On one hand, Moonee truly loves life, doing a bit of hoodwinking herself to get ice cream or soda, exploring abandoned houses. She’s just a little girl, having fun. At first, I worried that the film would make the case that Moonee and her mother should be left alone, allowed to live their lives this way. However, it’s all too obvious that Hailey is abusive by way of neglect. Hailey loves her daughter, and they have enormous fun together. She both allows and creates situations dangerous to her daughter’s well being. Ultimately, the film’s message doesn’t go in that direction. I don’t want to spoil it for you. This is a film that must be seen and taken in.

Why are people talking about The Florida Project?

Much has been – and should be – said about Willem Dafoe’s ever put-upon Bobby. Dafoe plays against type; he is no villain. Why haven’t we seen more of this Dafoe? He acts as bouncer, handyman, police, and father figure to the residents of the Magic Castle. We don’t know much about his life outside of the hotel, because everything revolves around Moonee. That’s where Bobby comes in. Despite all the ways that she conspires to bother him, day in and day out, he cares for her and the other near-orphan children running amok in the Magic Castle. He watches out for her and provides much-needed boundaries and structure. He literally saves her life at two points, though she’ll never know it. 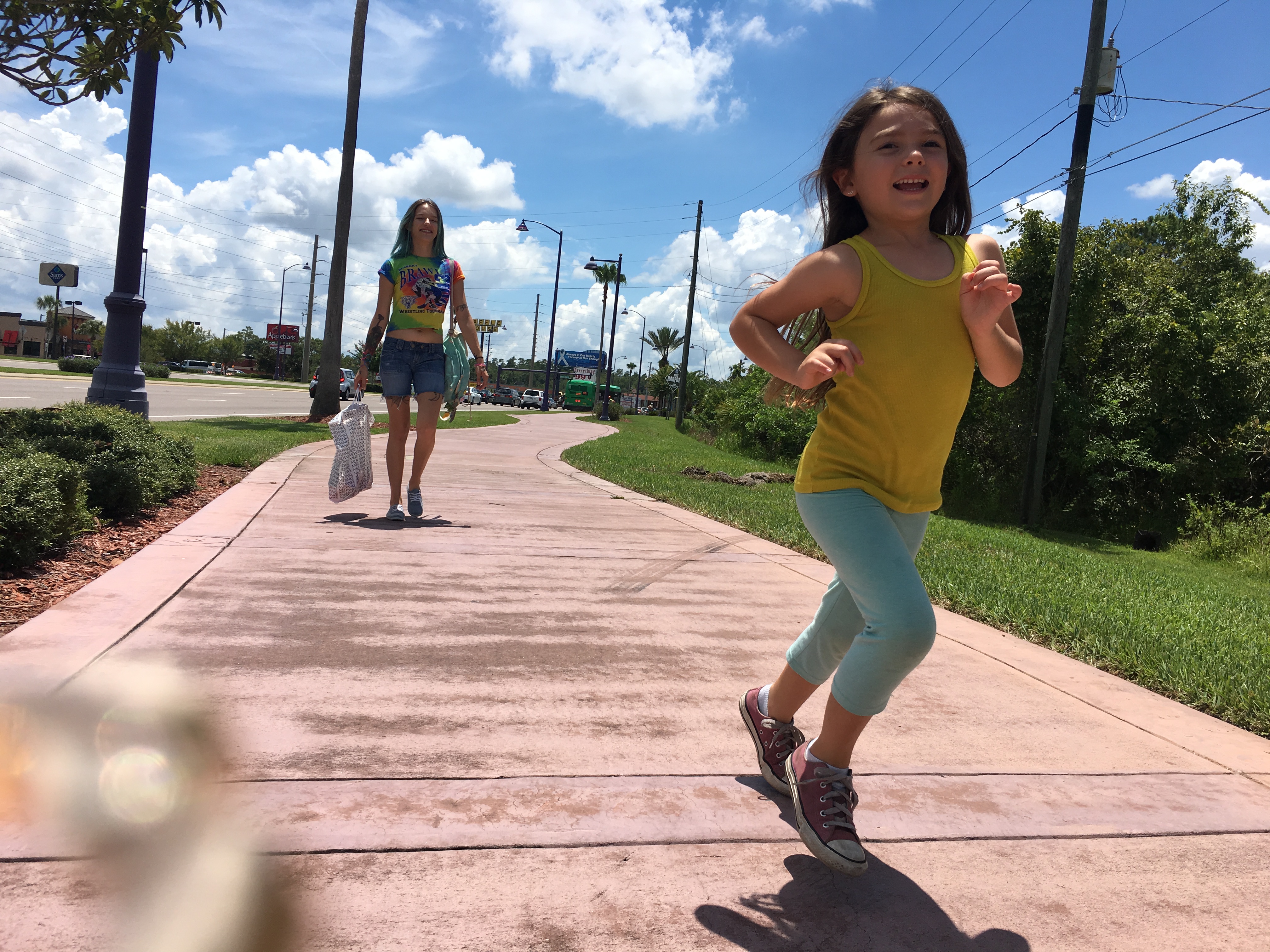 The Florida Project invites many comparisons to Moonlight and American Honey, two major coming-of-age films from the last year. American Honey’s Star (Sasha Lane) might well be Moonee in ten years or Hailey’s younger sister. Moreover, the madam of the American Honey crew, Krystal (Riley Keogh), could easily be Hailey if she had more ambition. Increasingly, films are digging into stories such as these: tragic and coarse, but utterly true and in need of telling.

Willem Dafoe deserves the Oscar buzz for Best Supporting Actor, but Brooklynn Prince deserves the Best Actress win, no question. Though she likely won’t get it (probably not even the nomination), and that will be a travesty. She steals the audience’s hearts from moment one when we see her spitting on a car and swearing like a sailor all the way to the end when her tough as nails exterior finally cracks. Throughout the movie, it seems more that director Sean Baker (Tangerine) just followed Brooklynn Prince around and filmed her – not a moment of her screen time feels scripted. This could be a documentary if not for the presence of Willem Dafoe’s familiar face. 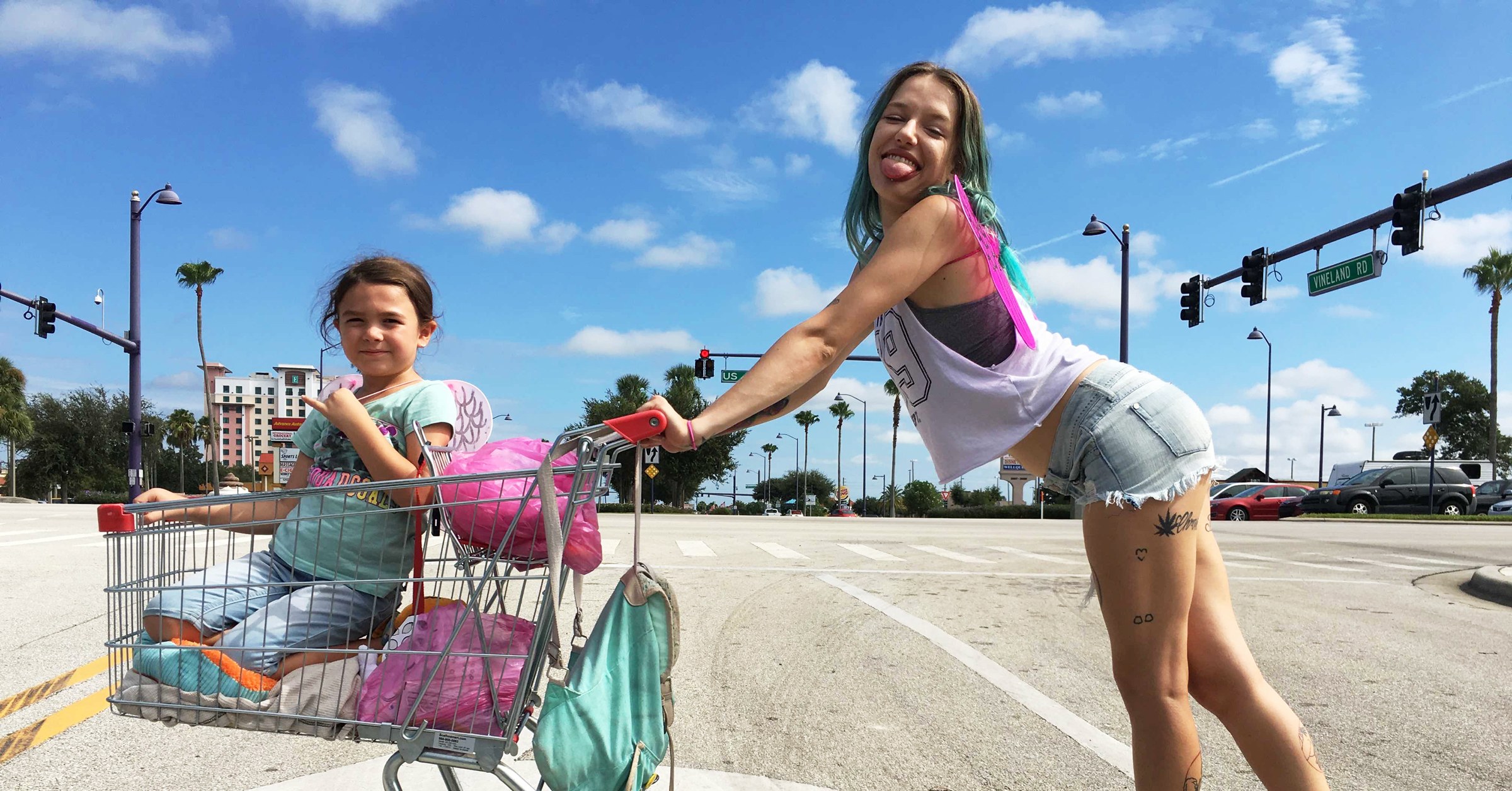 Yes: this is a film to watch and a story that needs to be seen and experienced. Many moments are tough to watch, but it never crosses over into the explicit – only the tragic. The visuals are arresting, from the vibrant colors of the hotels to stores and shops of all shapes, sizes and hues.

I do realize that I’m not telling you much in the way of plot here, but I went into The Florida Project knowing nothing but that Willem Dafoe was in it and the main character was a little girl. That’s all you should know. That, and get ready to give your heart away to Moonee.