A year ago, Mildred Hayes’ (Frances McDormand) daughter was raped and murdered. Burned alive, in fact. No killer has been found. Due to what Mildred sees as a lack of action on the Ebbing Police Department’s part, she leases three billboards on a little-used stretch of road outside of town, calling out the Chief of Police, William Willoughby (Woody Harrelson).

This sparks a wildfire in the town. While everyone empathizes with Mildred, they also hold the chief in highest esteem. None more than Dixon, one of his officers (Sam Rockwell). Following the leasing of the billboards, Dixon begins to wage a private little war with Mildred that threatens many lives throughout Ebbing, Missouri. 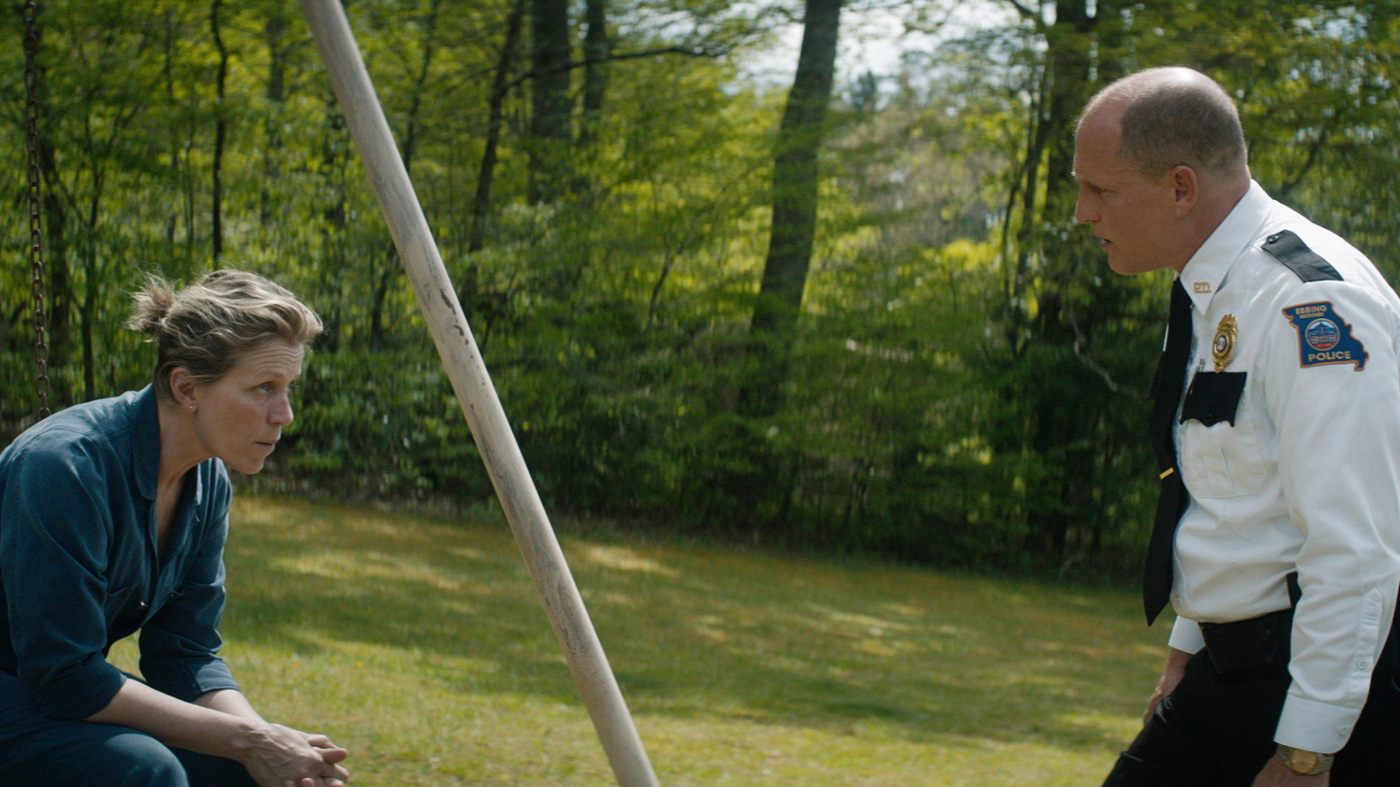 This sounds horribly dark and depressing. Is it?

Oddly, no. Though moments can be tough to get through. While Three Billboards explores many dreadful, difficult topics, it’s much more of a focused character study on two sides of a crime. It’s really not even about catching the real killer, but about closure, and the impotence of a police department that isn’t able to do what they need to do. Catch a killer.

Punctuating this bleakness is some dark humor and its welcome relief. Sam Rockwell is so strange and tragic, with some of the funniest moments. Enough cannot be said for Samara Weaving as Mildred’s ex-husband’s new 19-year-old girlfriend Penelope. She is absolutely delightful, bubbly and funny. You cannot hate her. We could have used more of her to give us breathing time.

Lightness also comes in the form of Mildred’s tumultuous relationship with her son Robbie (Lucas Hedges, who you’ll see quite a lot of during the upcoming awards season). They’re not without their rough edges, but they love each other, and Robbie is his mother’s rock in the middle of all this pain. Mildred’s problem is that she forgets that, while she lost a daughter, her son lost a sister. Through all that, they banter throughout, and he learns to stand up for his mother when it counts.

If this is a character study, what’s being studied?

Three Billboards is about a mother screaming out (yet Frances McDormand is so controlled throughout most of this film, it’s eerie) for justice for her murdered daughter, about an Officer who does not care about true justice because no one has ever believed in him, and about a Police Chief in a sleepy town who isn’t really in control but isn’t a bad guy.

Mildred’s titular billboards are the cry of a woman who has spent her life being pushed down and pushed aside. Literally beaten by her ex-husband who left her for the 19-year-old. No longer will Mildred be cast off or ignored. For she desperately needs closure, and she’s willing to take on the Ebbing PD and damn the consequences. Her performance holds a reserved depth that is impactful beyond words. You can feel every injustice throughout her life weighing upon her. She has had enough. She’s a hard woman, while very sympathetic. Frances McDormand has already won the Oscar, without question, in my mind. She may just have to fight off Meryl Streep (for The Post, which I hear is a stellar performance).

Any other performances/characters that stand out?

Sam Rockwell’s Dixon is so odd and tragically brutal. He’s similarly beaten down and uses his position in the police department to exercise whatever power he still has. His mother, whom he lives with, has nagged him and manipulated him for years, egging him on toward racially motivated police brutality.

Everything about Dixon is weird. From his rough speech down to his body language. He reminds me of a less comical, much more brutal Deputy Dewey (David Arquette) from Scream. There’s a point at which he stalks through town, assaults a woman and tosses a man out a window (brilliantly set to “His Master’s Voice” by Monsters of Folk) just because he’s hurting. And then, later, an odd shift occurs because someone finally takes the time to believe in him, and he gets just about as close to a hero that Three Billboards gives us. Rockwell is just about neck and neck with Willem Dafoe (The Florida Project) for Best Supporting Actor. Either could win, and both deserve it. 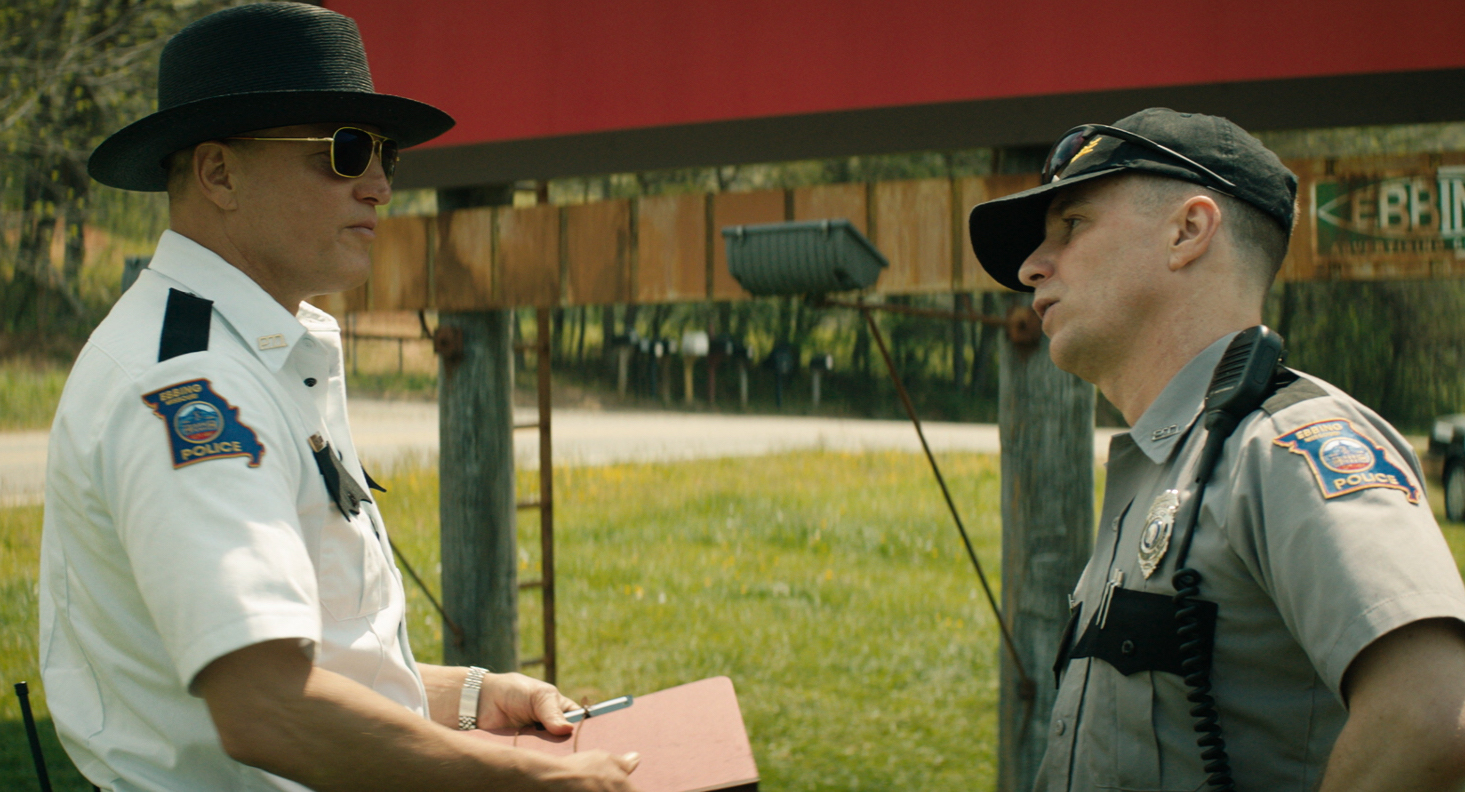 What about Woody Harrelson?

Woody Harrelson is more vulnerable and subtle than normal. He usually plays just about the same character, with varying degrees of nuance. However, here he’s not the drunken wise man (The Hunger Games) or the raging killer (War for the Planet of the Apes) or the psychopath (Natural Born Killers). He’s a tired family man in charge of a sad police department. He’s given up. What lights everything up is the chemistry between Woody Harrelson and Frances McDormand. Their playful, earnest banter is really fun to watch. They’re both world-weary, at the end of their respective lines, and right until their ends, they egg one another on.

Ultimately, this film sees three people at the end of their ropes and digs deeply into how they react to things, what sets them off, and what propels them. 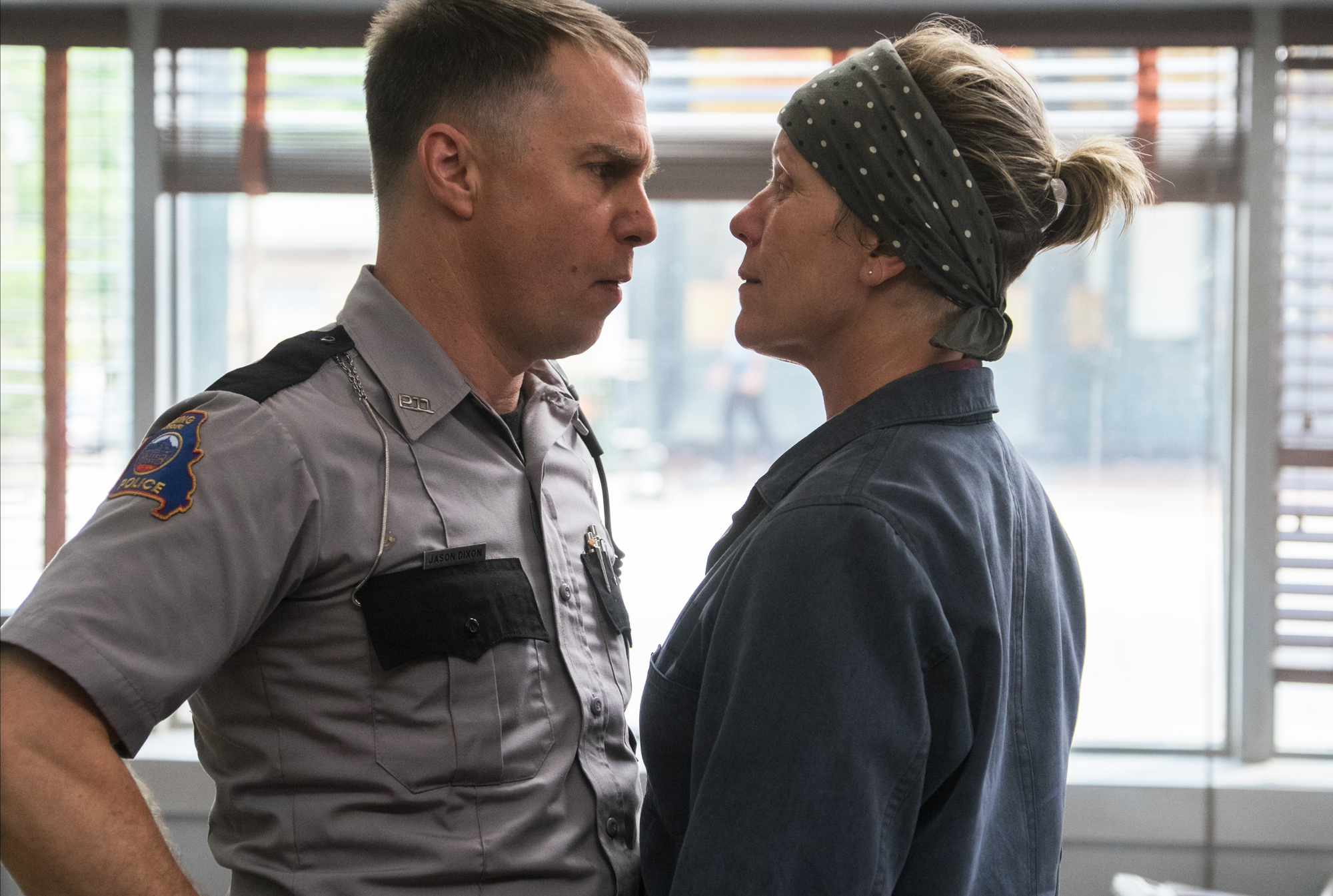 What else is this film trying to get at?

A tad more subtly than Wind River from earlier this year, Three Billboards tries to shine a light on the treatment of women. Obviously, the offscreen rape and murder of Angela Hayes (Kathryn Newton) proffers that message. But what sells this is McDormand’s portrayal of the burdened Mildred. Nothing in the world surprises her any longer, and there are things with which she simply will no longer put up. There’s a moment when her ex-husband Charlie (John Hawkes) begins to choke her, and Mildred doesn’t even blink, putting up almost no fight. This isn’t really a defiant moment, more like a resigned one. The world’s throwing this at me too? OK.

The most subtle, yet pervasive, aspect of this message about women’s treatment by the people around them is the language used. The cursing in this movie is strange. I’m no prude, but the women in the film are routinely and persistently — almost exclusively — referred to through expletives. This is a movie that aims to directly address violence against women. Yet it makes common those references, even between some of the women themselves. There could be a discussion of appropriation of terms, labeling oneself rather than receiving a label, but I’ll leave that to the linguists. It’s just off-putting and uncomfortable, which very well may be McDonagh’s point.

Any last words regarding Three Billboards Outside Ebbing, Missouri?

I’m behind on my Game of Thrones watching (I’m sorry!), so I haven’t seen much Peter Dinklage (unless you count the unfortunate X-Men: Apocalypse) recently. (Editor’s note: He’s also in Rememory, which isn’t very good.) He’s barely in Three Billboards, but he’s very good and so fun to watch.

I’m a music score and soundtrack nut. I constantly listen to both as I write and grade papers. As I mentioned before, the most intense scene in the film has “His Master’s Voice” by Monsters of Folk. Which provides an odd, welcome juxtaposition of calm against the brutality of the scene. Two versions of “Buckskin Stallion Blues” bookend the film, one at the beginning by Townes Van Zandt, and another toward the end by Amy Annelle. This song emphasizes this mournful yet hopeful theme moving throughout the film. That one day we might find a “buckskin stallion” or “golden gallion” and “sail into the light of day,” away.

Finally, Carter Burwell’s sparse yet effective score, reminiscent of The Last of Us score by Gustavo Santaolalla, sets the tone of Three Billboards pitchperfectly. It’s atmospheric, yet also not utterly grim, telling the audience that this is a quiet southern town struggling with a heart of darkness.