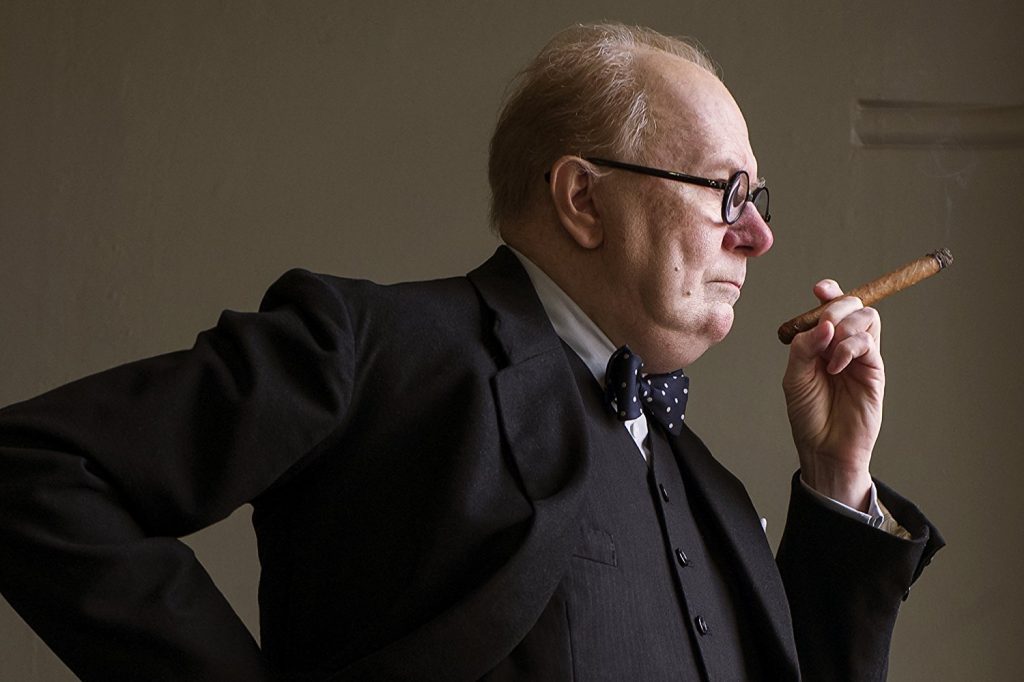 Just over two hours of Gary Oldman in a fat-suit. What more could you want from a film?

That’s Gary Oldman in there?

Believe it or not. Hidden beneath the swaying jowls and the thinning white hair are the alert, fiercely intelligent eyes of Oldman. Unmistakably. He’s an actor who has made a career out of disappearing inside the characters he plays. Now he’s doing it literally.

In Darkest Hour, he isn’t playing Winston Churchill – he is Winston Churchill. The prosthetic makeup is courtesy of Kazuhiro Tsuji, but Oldman contorts the chubby mimicry into his own, impressively nuanced version of the historical figure. Thanks to archival footage and photographs, we feel like we know Churchill. We’ve seen his stooped march, gnarled hands clasped behind his back. We’ve heard his nasally mumble; the words all tumbling into one another. And then we’ve witnessed him “mobilize the English language and send it into battle.”

But we’ve never seen such a full-bodied interpretation from a master actor. From the moment the moony enormity of his face is first illuminated by the struck match that lights his trademark cigar, you can tell that this is a performance unlike any that Oldman has previously delivered. Darkest Hour needs this performance. And thankfully it gets it. 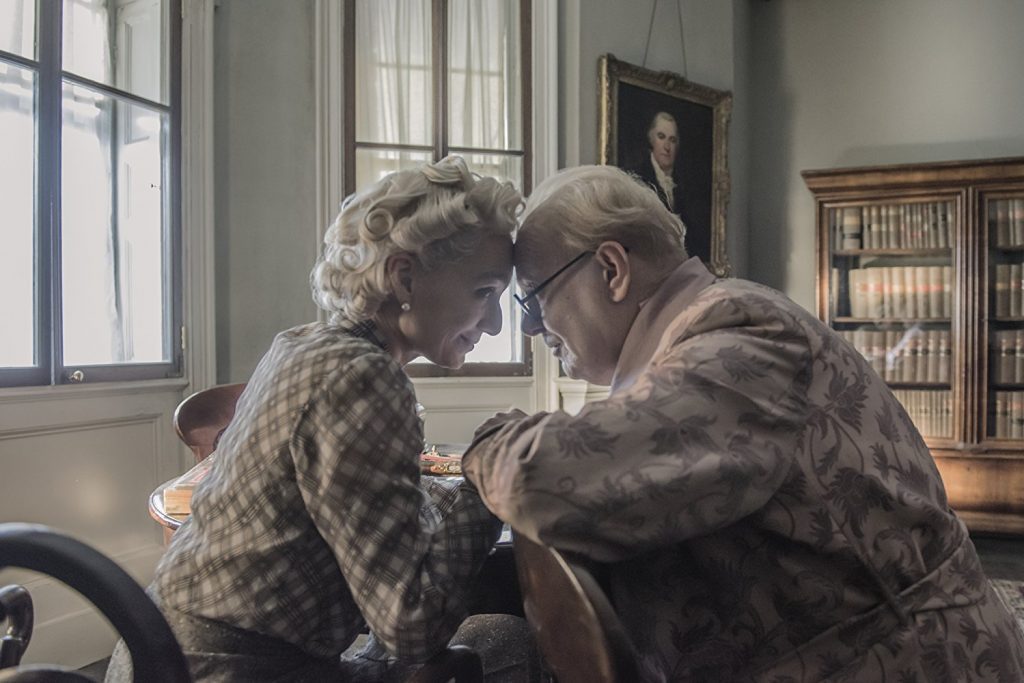 While the film surrounding Oldman is at times exciting and beguiling, it is nonetheless overlong, wonkily paced and fraught, at times, with revisionist drivel. Not that I’m a stickler for historical accuracy. But by the time Churchill had descended into the London Underground to interface directly with his working-class constituents, my tolerance for bullshit was being severely tested. Still, Darkest Hour is mostly a compelling period political thriller that is bolstered immeasurably by Oldman’s contribution. It nonetheless works on its own terms if you’re willing to overlook the odd bit of self-indulgence.

The titular darkest hour is that of Churchill and Britain both. May, 1940. France and Belgium are on the verge of surrender. Across the Channel, Hitler’s forces are poised to invade the United Kingdom. On the beaches of Dunkirk, “the whole root and core and brain of the British Army” are stranded; surrounded on all sides by German troops and cut off from resupply and rescue. Parliament has lost confidence in Prime Minister Neville Chamberlain (Ronald Pickup), who has terminal cancer and tenders his resignation to King George VI (Ben Mendelsohn). Britain, to use a technical political and military term, is absolutely f****d.

Enter Churchill. As the only conservative of whom the opposition approve – thanks mostly to the flip-flopping that caused most of his own party to despise him – it falls to him to establish a coalition government. At the time, victory seemed hopeless. The blood spilled in the Great War just two decades earlier was still tangy in the mouths of those who had lived through it. Most wanted peace. Churchill wanted to win.

I’m sure. The prevailing criticism of Churchill – aside from him not being anywhere near as progressive as this film suggests – is that he wasn’t all that great of a politician. His macho chest-puffing could just as easily have resulted in calamity, and that it didn’t is as much a consequence of sheer luck and the considerable efforts of civilians than any grand political maneuvering. Darkest Hour isn’t really interested in telling that side of the story. But to its credit, it doesn’t attempt to rewrite history to suggest this wasn’t the case. What it hones in on is Churchill’s conviction – “Many were dreading your appointment,” explains George VI, “but none more so than Hitler” – and most importantly his skills as an orator.

The speeches indeed. Almost every scene in Darkest Hour involves Churchill, including several private ones between him and his wife, Clementine (Kristin Scott Thomas), and a young typist (Lily James) to whom he dictates his various letters and speeches. But the spouse and secretary characters have been done before, and more thoroughly. Here, they’re to reinforce Churchill’s belief in himself whenever he’s slowed by doubt. But the replication of his most well-known speeches has never been dealt with this dramatically – and certainly not this cinematically. 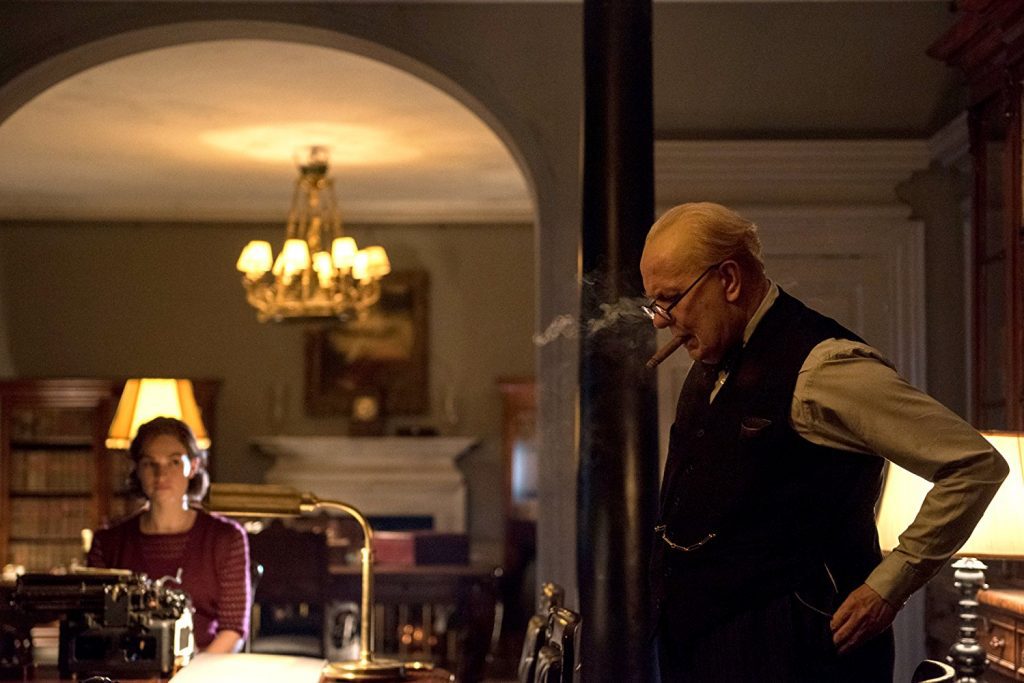 The director is Joe Wright, who has been making a career out of reinventing how period pieces ought to be shot. (He also captured the sheer scale of England’s finest hour at Dunkirk in 2007’s Atonement arguably better than Christopher Nolan’s Dunkirk did.) I’m personally of the opinion that if you talk with conviction about basically anything, people will believe you. Churchill obviously felt the same. His most famous speeches are so familiar now that you might find yourself mouthing along in unison with him, as James’ character does from the sidelines. But none of their power has been diminished. In fact, Wright’s virtuosic filmmaking skills give them more power still.

By the end, I was tempted to drop in at the nearest recruitment office and devote the rest of my life to Queen and Country. Then I remembered that Theresa May’s in charge now and went to a Pizza Hut instead.

How good can a movie like this really look?

Better than you’d imagine. Wright even finds angles which frame the House of Commons in a way that feels majestic – and that’s really just a holding pen for champagne-soaked toff idiots. Working for the first time with DP Bruno Delbonnel, Wright sweeps his cameras from there to the cabinet war rooms beneath Westminster Palace, to Churchill’s private residence. The production design is immaculate without imploring you to notice it too much. And all the while, Wright’s regular composer, Dario Marianelli, drums up the excitement with go-to-war tunes that make even Churchill sat on the s*****r seem momentous.

So Darkest Hour is good?

But nothing, really. It’s good. Not great, thanks mostly to the aforementioned issues with length and pace, and a tendency to redraft history even more emphatically in Churchill’s favour. But good, certainly. And Anthony McCarten’s script is so eloquent and theatrical it didn’t strictly need so much filmmaking effort to be impactful. Oldman reading those lines on a stage would have been enough. Darkest Hour goes above and beyond, in that sense. It isn’t the film that some people probably expected it to be, but yeah – it’s certainly a good one.

See it. Like I said at the top, its two hours of Fat Gary Oldman shouting at weasel politicians. Can’t go wrong, really.