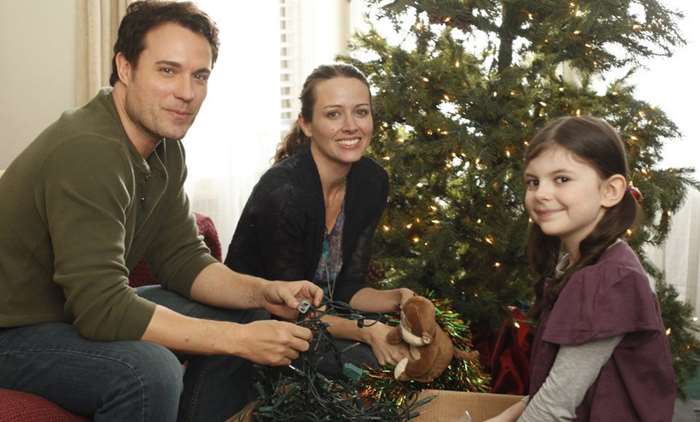 This is the third made for TV Christmas movie that I’ve watched recently, but it actually seems like I’ve seen a lot more than that. Something that I’ve begun to notice is that there are a limited number of plot lines for these TV Christmas films. You’ve got your three basic Christmas flavours: an unlikely couple ends up together despite all the odds; a child of a broken home wishes for a family for Christmas; or a miserable sod finally learns the true meaning of the festive season. I was thrilled to discover that Dear Santa, directed by Jason Priestley (yes that Jason Priestley), is incredibly daring. This film tries to pull off not one, not two, but all three of these by-the-numbers tropes. Hurrah!

Three you say, that sounds impressive?

Not as much as you might think. In fact, the most impressive thing is that it tries to cram in all three Christmas flavours, but also manages to be entirely unambitious. A daring feat if ever there was one.

Ok, so it’s not all that great then. What’s it all about?

Crystal Carruthers (Amy Acker, who should really know better) comes from a wealthy family and she has a lot of money. We know this because she has an extremely long coffee order, she shops in fancy stores and lives in a posh apartment. Her parents tell her that she’s going to be cut off to encourage her to find a job or a man because of course, the two are mutually exclusive. Luckily for Crystal earlier that morning the postman had dropped a little girl’s letter to Santa and she’d picked it up.

She doesn’t keep the letter, surely?

She certainly does. Not only does she keep the letter but she opens it and it turns out that Olivia (Emma Duke) wants Santa to find her a new mum and a new wife for her Dad, Derek (David Haydn-Jones). There you have the first element of the Christmas TV movie holy trinity.

Ok, maybe she was just curious. Surely she just puts the letter back in the postbox, right? I mean, it’s not hard to solve this problem?

Guess again. She reads the letter, does a little bit of a Google stalking and finds out where the family lives. Apparently, it’s a nice area, so they pass the first test. Crystal then discovers that Derek runs a soup kitchen and weirdly runs a snowplough business in his spare time. What’s his name again? It’s Mr. Plough! Crystal decides that the best way to win his heart is to volunteer at the soup kitchen. That’s right, two people from completely different worlds who seem like they shouldn’t be together might just end up together. There you have the second element of the Christmas TV movie holy trinity.

This all sounds very creepy.

Oh it is. Very much so. Crystal manages to make friends with Olivia by teaching her about clothes and figure skating, while also managing to lever out Derek’s current girlfriend Jillian (Gina Holden). You’ll never guess what happens next though?

Crystal never really liked Christmas much before because her parents are always away at Christmas and it’s never been a family thing for her.

I think I see where this is heading.

Well when she first starts her creepy volunteering spree at the soup kitchen Crystal is out of her element because she’s a bit selfish.

Does she end up learning the true meaning of Christmas?

Yes! How ever did you guess? The more time she spends with Olivia, Derek and all of the gang at the soup kitchen, the more she actually starts to like them. And there you have part three of the Christmas TV movie triumvirate.

It all sounds a little bit unsettling for a Christmas film, is Dear Santa any good?

There’s no doubting that Crystal is a bit creepy. She could have easily resolved everything by sticking the letter back in the postbox. That said, it might just have been Santa making them fall in love all along. It always had to happen that way. I hope that’s not the case though, why should Santa be in charge of making people fall in love? The genie in Aladdin won’t make people fall in love so why does the big guy in red think it’s fine?

There’s no escaping that this film was more predictable than that sock shaped parcel under the Christmas tree but I did actually quite enjoy it. I’m not sure if that after only three weeks my standard are slipping and my brain is melting or if this is genuinely quite a watchable film. I thought Crystal was a little unhinged, to begin with, but she does become quite likable and quite watchable, but I think that’s the case with Amy Acker in general. She should really be doing something slightly better than this but she’s still enjoyable. I was quite surprised that I liked Olivia and her scenes with Crystal. Usually, the children in these kinds of films are insufferable. Derek, however, is a bit of a plank, a complete and utter charisma vacuum.

I think so. It was harmless and reasonably entertaining if you can get past the slightly creepy premise. It is by no means the best Christmas film but it does contain all three of the core Christmas TV movie plot strands (patent pending). I wouldn’t go out of your way to see it but if it’s on in the background it won’t be the worst thing in the world.