New York City Cop John McClane (Bruce Willis) flies to Los Angeles to visit his wife, Holly (Bonnie Bedelia), for Christmas. They’ve been separated for a year because she earned a major corporate promotion. This meant a transfer to LA while he had cases to wrap up in New York. He’s picked up from the airport in a limo driven by Argyle (De’voreaux White). He takes him to Nakatomi Plaza, where his wife’s Christmas party is in full swing.

John reunites, briefly, with Holly before they restart their argument about her cross-country move. Needing to cool off, he cleans up from the long flight in her office’s bathroom, and then he hears gunshots. Terrorists have stormed the building.

From this point on, I don’t want to give a beat-by-beat recap of the film. I truly believe this is a movie that you need to see for yourself. Suffice it to say, John McClane is thrust into the ultimate wrong place at the wrong time situation. He intelligently and systematically works to return to his family, save his wife, and kill all the terrorists. Because that’s what Christmas is all about!

“Welcome to the party, pal.”

The terrorists are led by Hans Gruber (Alan Rickman), who seems just like a businessman trying to make a deal. Gruber reads Forbes and TIME, can identify the origins of tailor-made suits at a glance, quotes Alexander the Great, and hums “Ode to Joy” in the elevator.

Despite his large group of terrorists, most of whom make up a who’s who of German henchmen from 80s action cinema, he’s organized and structured, managing them like a corporate boss, reading his demands to the assembled hostages from a day planner. When she finds out about Hans’ true plans to rob the Nakatomi vault, Holly calls him on his false front. “After all your posturing, all your speeches, you’re nothing but a common thief.” He replies, still as Hans as can be, “I’m an exceptional thief, Mrs McClane. And now that I’m moving up to kidnapping, you should be more polite.” He’s not hot-headed. He’s suave. He’s got a plan.

The thing is, John McClane had plans too. Gruber got in the way of those plans. 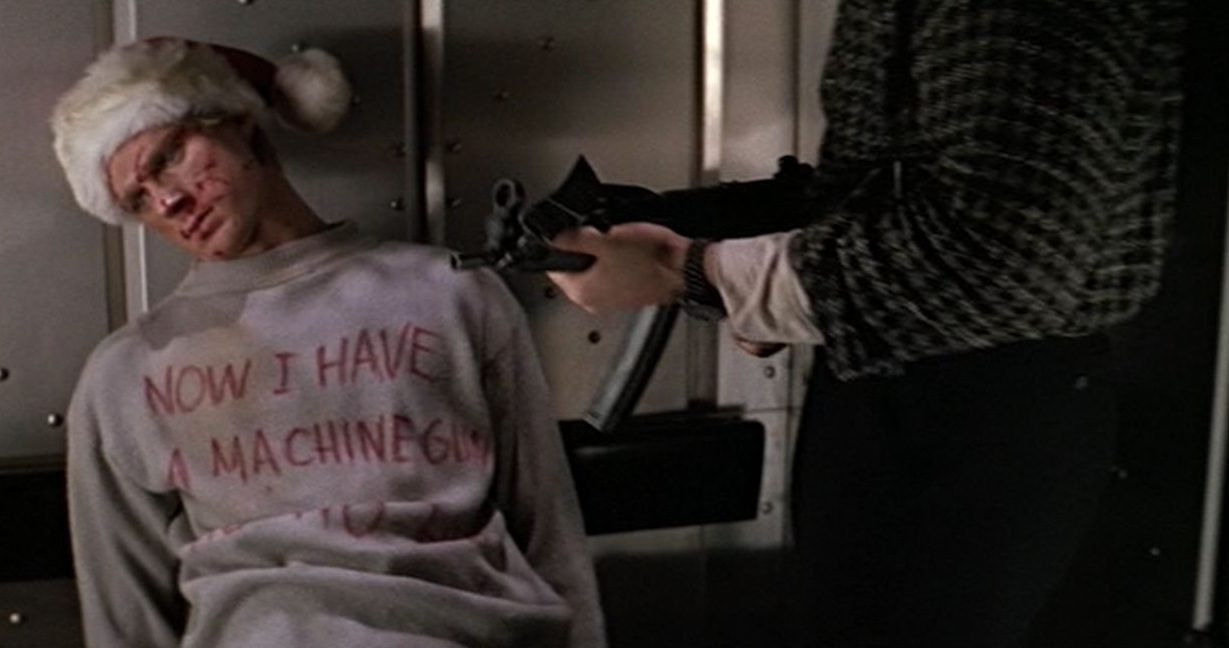 “Come out to the coast, we’ll get together, have a few laughs…”

One thing that makes Die Hard stand out among the big action movies of the 80s is the humor suffused throughout. When the film begins, Willis plays McClane thoroughly humorlessly, a deadpan, cool cop through and through. He smokes his cigarettes, doesn’t talk about his feelings, which he buried at the prospect of seeing his nearly estranged wife again. He knows that, when she got her promotion, he played the misogynist man who’s actually just insecure about his wife’s big-time corporate gig. And now he’s got to try and make things right.

His unruffled exterior belies the crazy man that McClane actually is. He goes from this unflappable guy who hates flying to this deranged, bloodied hero running throughout a building, picking off terrorists one at a time. He talks to himself constantly. A lone character tends to be boring on his own. Talking to himself just to provide exposition for the audience, but he jokes around, laughs uproariously when plans seem to go his way, then dances around when the terrorists (or inept cops) foil those same plans. 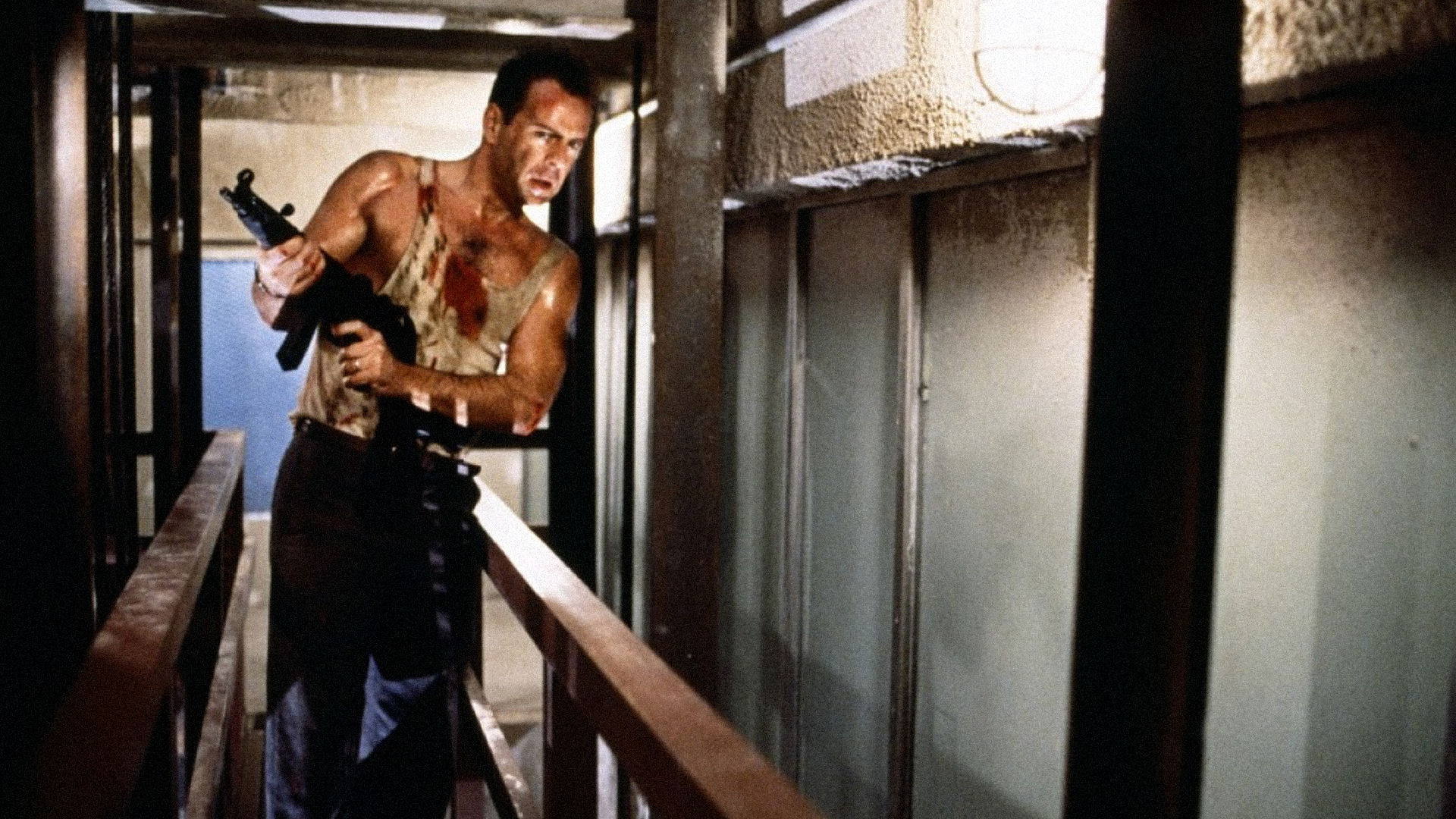 Throughout the film, McClane is really the ultimate cop. He doesn’t immediately enter the fray, guns a-blazing. Even when his plans don’t seem to be working out, he’s still thinking. He fights smart. This is rare for most 80s action films, especially one that seems to just be another random shoot ‘em up. He takes his time, tries to figure out the names and roles of his adversaries and works to bring the LAPD onto the scene. All while trying to make sure no one knows that his wife is in the party. Even when connecting with Sgt. Al Powell (Reginald VelJohnson), McClane disguises his identity. Not giving his badge number or even revealing that he’s a cop, making sure that the terrorists have as little information as possible.

McClane is purposeful about each thing that he does. He reveals his presence early on. Sowing seeds of doubt and fear within the terrorists themselves, sending down a dead member of their party with a message that he, now, has a machine gun.

“It’s Christmas, Theo, it’s the time of miracles. So be of good cheer and call me when you hit the last lock.”

This isn’t just a movie set during Christmas. It’s an excellent Christmas movie on its own. A man trying to get back to his family at Christmas, then fight terrorists! What else could you ask for? What’s more, Christmas is intentionally peppered throughout. And more than that they’re at a Christmas party. Theo (Clarence Gilyard Jr.), Gruber’s resident geek hacker, paraphrases “Twas the Night Before Christmas” as they plan to confront the LAPD. “All right, listen up guys. ‘Twas the night before Christmas, and all through the house, not a creature was stirring, except the four assholes coming in the rear in standard two-by-two cover formation.” Hans (in the quote above) parodies the typical refrain of holiday movies, saying that Christmas is “the time of miracles.”

Even more subtly, when McClane and his wife (whose name is, appropriately, Holly…) are reunited in the end, where normally it would begin snowing and everyone gets ready to open Christmas presents, there is snow, of a sort. The bearer bonds that Hans tries to steal are blown outward from the top of Nakatomi tower and begin to “snow” on the crowd of onlookers below. Ultimately, McClane, who had been a Scrooge about his wife’s job and what their family actually needed, learns his lesson. They need to be together, especially at Christmas.

Die Hard is the Christmas movie for people who are sick of the saccharine, candy-cane-coated mush that comes with over half of the Christmas films we’re inundated with over the holiday season. It’s that extra shot that you need to keep yourself going when the constant stream of people starts to overwhelm you. In short, I can say without a doubt that I’m absolutely not overstating anything when I say that Die Hard is very nearly both the perfect action movie and the perfect Christmas movie, all wrapped up in a nice little bow. With a machine gun. Ho ho ho.