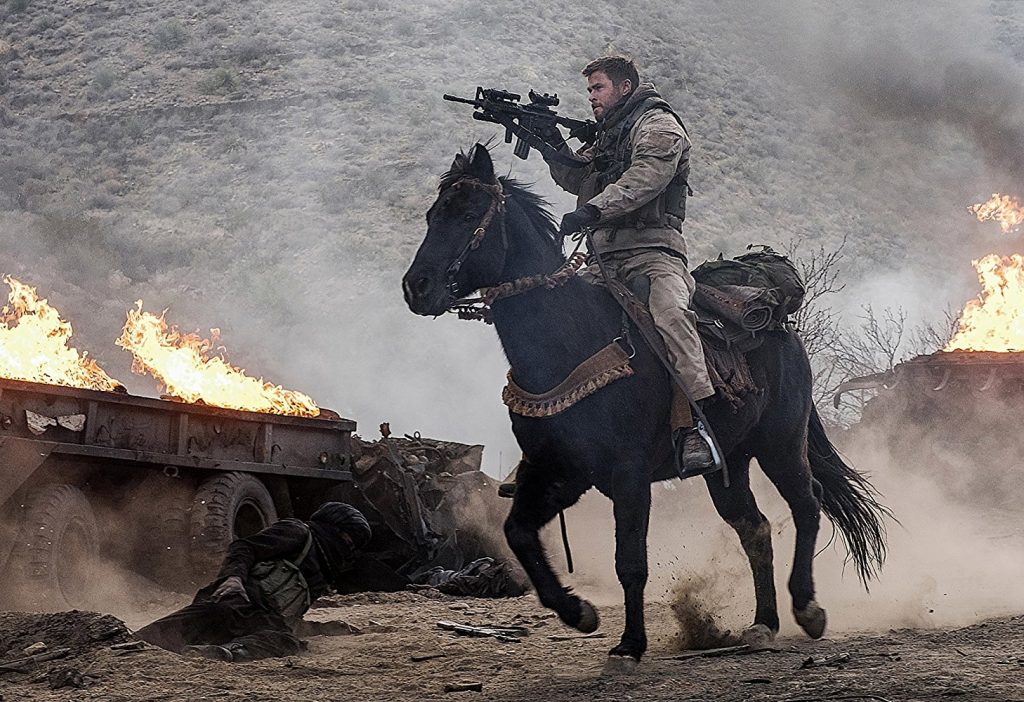 Based on the excellent book Horse Soldiers by Doug Stanton, 12 Strong is the latest ode to the American manly man. And in this the manly man is on horseback, which is the manliest method of manly transport.

So, it’s another propaganda piece?

Funnily enough it isn’t. I just had those jokes teed up since I saw the trailer. What would be the point in coming up with silly pre-emptive remarks if I wasn’t going to use them? Start doing honest, accurate, humourless criticism? No, thank you. I’m a critic, and if there’s one thing every critic knows, it’s that absolutely nobody likes or trusts critics. I might as well make it fun for me.

But, no, 12 Strong probably isn’t what you’re expecting in that regard. In fact, one of the most interesting things about it is how it lacks any kind of discernable attitude towards those unsure, desperate days in American history. Some would suggest that’s a problem. All art is political, they might say, and to not have an overt stance on the subject is cowardly. But that’s just a self-serving desire. The critic – the politically-minded critic, in particular, which is most of them – needs a film to have an explicit political point. That way they can decide whether or not they like it without having to busy themselves by forming an actual opinion of their own.

A scant two months after 9/11, a dozen Special Forces chaps were discretely inserted into northern Afghanistan. Their mission was to embed themselves with the tribal leaders of the Northern Alliance. Precariously astride horses, they were to navigate the inhospitable mountain passes and radio coordinates of Taliban strongholds to U.S. bombers. The point of this was to secure the north of the country – particularly the major city of Mazar-i-Sharif. Doing so would allow the U.S. and its allies to stage a full-scale invasion of Kabul, but until then, they were on their own. 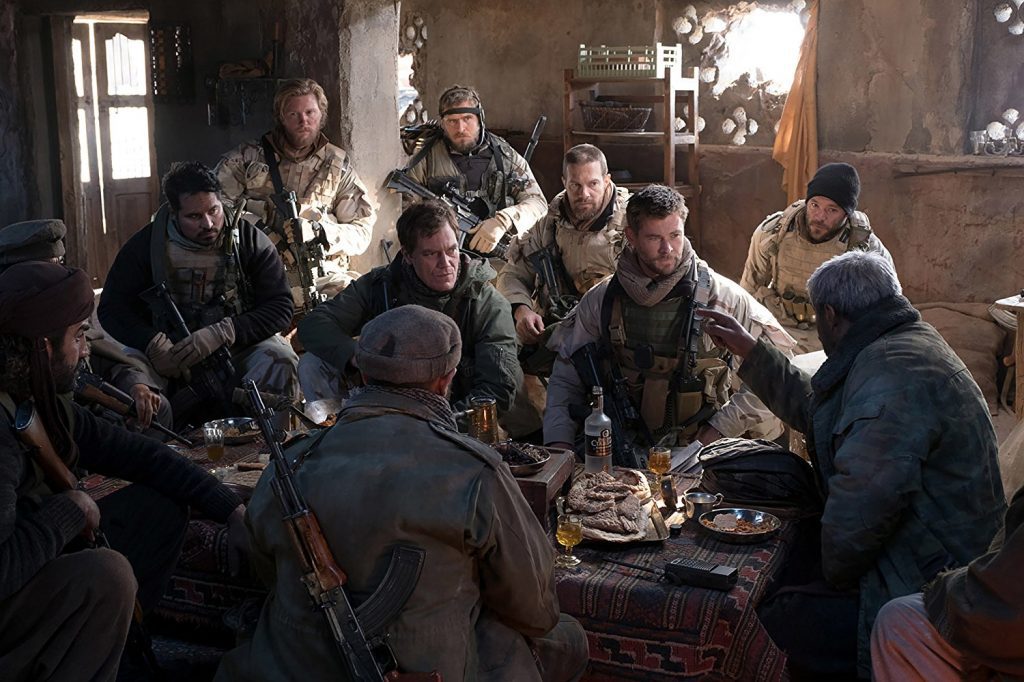 Chris Hemsworth plays Captain Mitch Nelson; his men include Michael Pena, Trevante Rhodes, and Michael Shannon. In the movie’s opening scenes we see them do things like watch the Twin Towers collapse on live TV, or be interrupted during a training exercise by someone telling them that the Twin Towers have collapsed on live TV. Pena’s wife refuses to have sex with him before he deploys so that he’ll definitely come back home.

These opening sequences are where you’ll find all that pesky patriotism. That’s where 12 Strong feels a little bit like ooh-rah all-American propaganda. Answer your country’s call, it seems to say, and you, too, can be as handsome as Chris Hemsworth. Thankfully this doesn’t last. It’s characterisation, not a recruitment drive. Once we understand why these men are willing to leave their families and go to war – “It’s a hell of a thing we do,” Michael Shannon says, vocalising that exact point – then 12 Strong is content to remain tight-lipped about the moral justification of the conflict. It knows that you’ll never be as handsome as Chris Hemsworth.

Well, if you say so.

I do. Anyway, Nelson and his compatriots leave for the drier climes of Uzbekistan, where they receive orders from a no-nonsense colonel (William Fichtner) and an unamused lieutenant colonel played by comedian Rob Riggle in a knowing bit of casting. (He was actually a Marine Corps Lt. Col., and served in Afghanistan.)

Next stop: Afghanistan. Next eccentric character actor: Navid Negahban, as Northern Alliance warlord General Dostun. He does funny things like swig vodka straight from the bottle, lie about which languages he understands, and show the Americans off to his bewildered countrymen.

It is better than I expected it to be and much worse than it could be.

From a technical perspective, it’s all solid. The director is Nicolai Fuglsig, a Dane making his feature debut. He has prior experience directing commercials and a former career as a photojournalist, so he’s got a sense for sweeping landscapes rather than sentimentality. To be fair, these landscapes are actually those of New Mexico and California, and you can sometimes tell. But his preference is realism over bombast. You can tell that, too. The film’s slightly overlong and some of the protracted gunfights – especially in the final act – seem to each go on for a few minutes longer than any gunfight reasonably should. They still, though, feel like gunfights.

The overall effect is a bit draining, to be honest. And not necessarily in a bad way. People lavished Christopher Nolan’s Dunkirk with praise for being primarily a sensory assault. I liked that film less than most people did, and I can still say with absolute confidence that 12 Strong is vastly inferior to it. But it has a similar enthusiasm for the crack of gunfire, the rumble of bombs, and a score that gradually ratchets up the tension without becoming overwhelming or too emotionally manipulative.

Well, let’s not be too hasty. The story of the Horse Soldiers is unconventional. But 12 Strong is rigorously conventional. Which means that for every unique or interesting scene, like the one in which Shannon’s character slips a disk and spends the movie’s climax flat on his back, there’s something dumb that a producer somewhere evidently thought was worth including.

One of these things is a villain, a Taliban commander by the name of Khaled (Fahim Fazli). This guy looks exactly like Jafar from Aladdin, which was always the first thing I thought whenever the movie periodically cut to him glowering in close-up. He does ludicrously evil things, like execute a schoolteacher for trying to educate a little girl. (The girl is made to watch.) He also happens to be General Dostun’s mortal enemy. At one point, Dostun calls him on the phone and says, “The Americans are here. F**k you.” I laughed at that bit, but I’m still not sure whether or not I was supposed to.

Maybe. But I’ll tell you what wasn’t a joke: his stupidly melodramatic comeuppance, or the running sub-plot of Hemsworth’s character becoming a warrior rather than a soldier under the barbaric tutelage of Dostun. That stuff is all really dumb, and feels like a betrayal of the story’s context, which is supposed to be about small groups of elite soldiers working with a country’s army and citizens as allies, rather than invading marauders.

12 Strong is a tale of real-life heroism against staggering odds, so it’s far from restrained. But it’s also surprisingly understated. The better, less gung-ho parts of the film are well worth watching. But the deviations into formula prevent the Horse Soldiers’ fact-based story from ever accelerating into a gallop. And while we’re on the subject of horses, I’d just like to wish River Rule in the 4.20pm at Wolverhampton the best of luck. I’ve got a tenner on him.