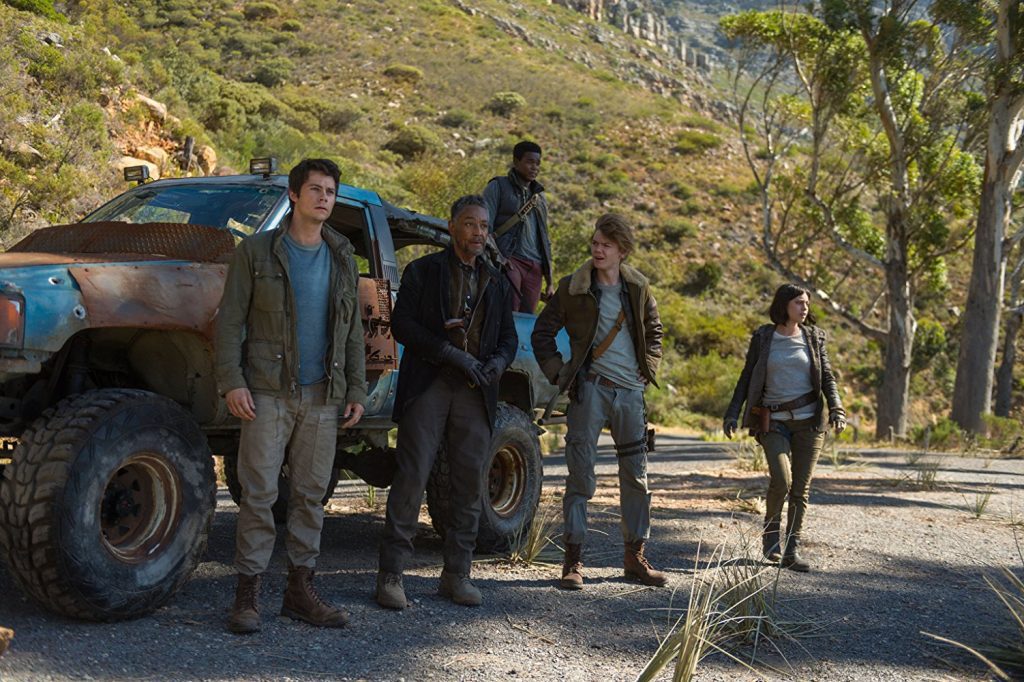 Maze Runner: The Death Cure is apparently the last cinematic movie of a trilogy based on the novels of the same name. The journey began in The Maze Runner, continued with Maze Runner: The Scorch Trials, and ends with The Death Cure. Unfortunately, The Death Cure leaves the series falling awfully flat, compared to feelings of intrigue and exuberance left after the first film. The film companies who want to invest in trilogies should just call Matt Reeves. The recent Planet of the Apes trilogy that just wrapped up may be one of the best trilogies in the last decade. But I digress, that’s neither here nor there. We are talking about this unfortunate collapse.

So it’s just another bad end to a trilogy?

Exactly. This movie plays out so much like a video game it is almost unbearable at times. Almost to the point where I can bring an Xbox controller to the movie theatre and pretend to play along with the actions. I could put my controller down for the intimate cut-scenes and then correctly playing through the Quick Time Events. (RIP Spider-Man 3: The Game.) The number of cliches in this movie are staggering. “You want us to go in the dark tunnel?” Boss fights in crumbling buildings, mind experimentation, kiss scenes in fiery collapses, fights against friends, the dead coming back to life, a big action set-piece to open the movie, the “last civilization” behind giant walls. If you take a shot for every scene/theme you have seen before in another movie, you will get absolutely inebriated before the halfway point of this 113 minute monster of a film. 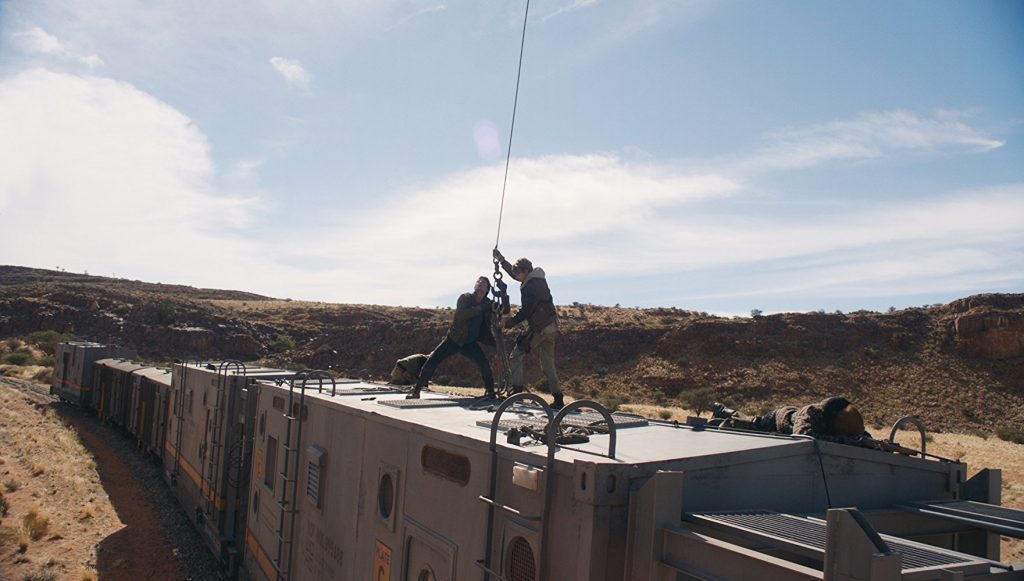 What’s The Death Cure about?

Following the events of the last two films, Thomas, Newt, and I believe Frypan (yes, that’s a character’s name) are still immune to the virus. The movie begins with a train set piece that was ripped right out of Sam Mendes’ James Bond movie Skyfall, with the three listed above trying to steal a train that is carrying immune children in hopes of finding their kidnapped friend Minho. In the old “switchers” moment, they grab the wrong train, and decide to head to WCKD’s headquarters, the last city on Earth. Along the way they head through dark tunnels filled with cranks and barely escape.  Just like possibly every zombie movie ever made.

The group makes it to the WCKD city and run into a past foe who was thought to be dead, who is now their friend. (Cue obvious surprise music.) Now they make a deal with Gally’s boss to get inside of the city. They realize that they can use Teresa (who betrayed them in The Scorch Trials) to get inside of the main building to save Minho.

What happens after that?

What follows is a nearly 90-minute set-piece to set-up for an action-adventure ending. Thomas, Newt, and Gally work with Teresa to release the rest of the immune children WCKD is holding, find Minho, only to realize that Thomas’ blood is the only thing that can cure the crank virus. (Yeah I know, even you saw that coming and you probably haven’t seen the movie yet.) Outside of the walls, Gally’s leader uses the information supplied by Thomas and his friends to “storm the castle of the rich,” and effectively lead a revolution against WCKD. The ending scene of the revolution rushing in the walls is the best storyline in the movie. Not much time is spent on it.

As Thomas and his friends try to escape, one of his friends reveals he’s been bitten (shocker) and must fend off the virus before he attacks Thomas, to no avail. Thomas must mercy-kill one of his closest friends.

Finally, Teresa contacts Thomas to let him know that his blood is the cure and he heads back to try to synthesize a cure. Cue double cross plot device as Janson is there to capture Thomas and reveals that the virus is turning him into a crank. He needs Thomas’ blood. The revolution starts destroying buildings and WCKD’s main building crumbles around them as Thomas fights to get loose and has a boss fight with Janson in the building. The movie ends with Janson dying with the, “You missed your shot kid. No I didn’t.” line and Teresa and Thomas passionately kiss on top of the building with fire burning around them and a hovercraft trying to transport them out. Not even joking. Teresa dies saving Thomas, leaving Thomas and the rest of the “safe haven” community to reflect on the friends they’ve lost. That’s it. 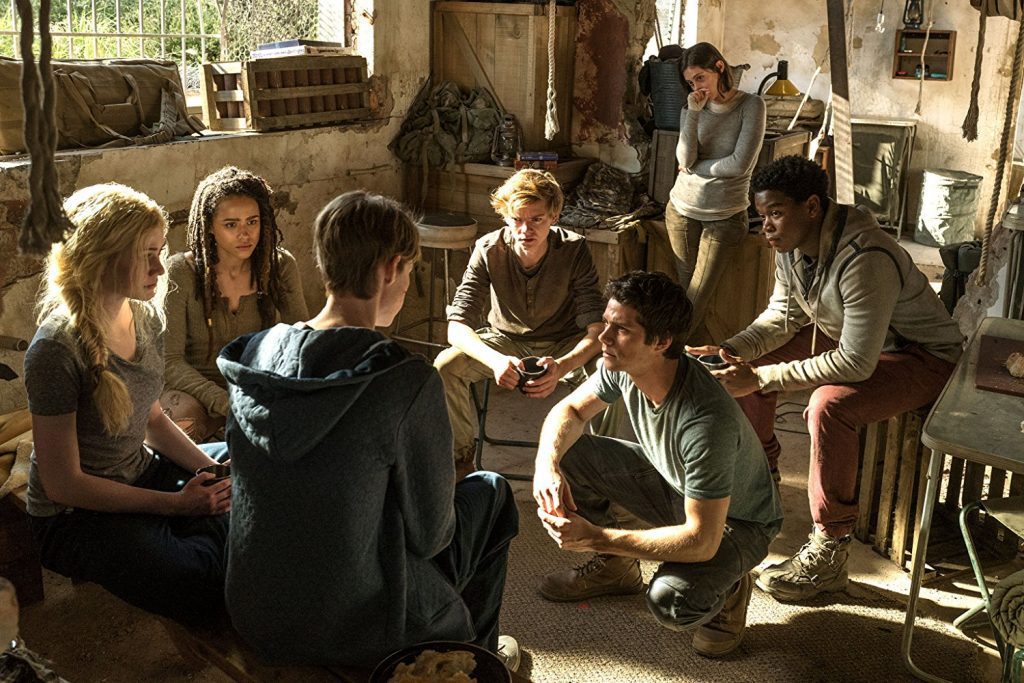 Dylan O’ Brien returns as Thomas. Actually most if not all of the cast from the first two movies return for this last one. Which is a good sign. They believed in this trilogy and stuck through it to the end. I’m happy for them. It’s always a good sign whenever Giancarlo Esposito is apart of something. I just wished he had more screen time. But this trilogy is about the teenagers, and the one thing going for this trilogy is the acting of Dylan, Kayla, Dexter, and Ki Hong Lee as the main cast. Other than that, there are no outstanding actors or actresses that many would know.

If you have movie pass, or a movie gift card, use it on this movie. This movie’s length works against it and the popcorn you buy will be gone before the good action begins. Honestly, this is a movie you wait for on DVD and add it to your collection to show off the latest 4K HDR Hi-Def, 10.1 surround sound, etc. type of theatre set up in your home.

The action set pieces at the end of this movie, while formulaic, are very fun to watch and view. The special effects are solid and this feels like the end of a trilogy, with a lot of action crammed into the end of the movie. Honestly, that’s the best part, because the story is so bland and formulaic that it forces to the viewer to groan audibly a couple times. This is a movie night movie with your friends at best.